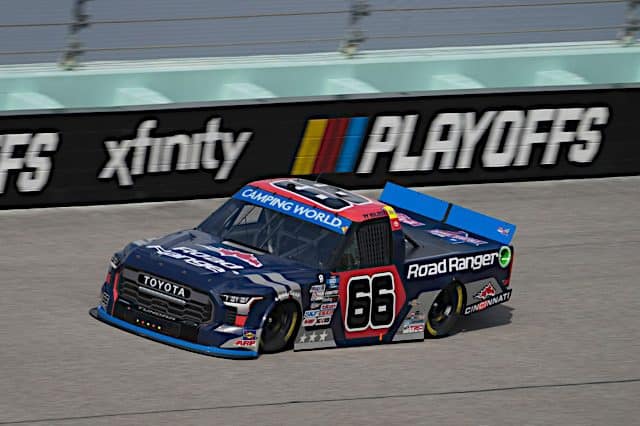 Majeski will race for the championship along with Zane Smith, Chandler Smith and Ben Rhodes.

“Lot of sim time, lot of simulator,” Majeski said about the next two weeks. “Just like the rest of the year, we’ve been working hard on Phoenix [Raceway] ever since we won Bristol [Motor Speedway]. We’re bringing that truck back. I feel really good about what we have so far and keep fine-tuning it. If it’s anywhere near this thing today, it’d be pretty good.”

Rhodes just barely edged out Stewart Friesen by one point after a tight battle in the closing laps with his ThorSport Racing teammate Matt Crafton.

Friesen, Christian Eckes, John Hunter Nemechek and Grant Enfinger are knocked out of the playoffs.

Nemechek’s championship hopes took a big dip early in stage one after multiple scrapes against the wall caused a flat tired that sent him into the wall on lap 14. He made several pit stops and was several laps down all throughout the race. Nemechek finished 35th, six laps down.

Enfinger cut his tire on lap 81 in stage three and ended up finishing 14th, one lap down.

Aside from Nemechek and Enfinger cutting a tire and getting in the wall, as well as a few other drivers, there were no major issues on the track. All but one of the 36 drivers completed the race (Spencer Boyd, brakes), though just 10 trucks were on the lead lap at the finish. The first time that happened this season was back at the Bristol Motor Speedway dirt track.

It all comes down to the Truck Series championship race at Phoenix Raceway in two weeks. Television coverage for the Lucas Oil 150 kicks off on Friday, Nov. 4 at 10 p.m. ET on FOX Sports 1.

“Rhodes just barely edged out Stewart Friesen by one point after a tight battle in the closing laps with his ThorSport Racing teammate Matt Crafton.”

Crafton could have passed Rhodes at any time. He had a faster truck. This is no different than what Cole Custer did at the Roval for Chase Briscoe.

Can’t prove crafton could have passed him. Custer wasn’t very smart and too obvious.