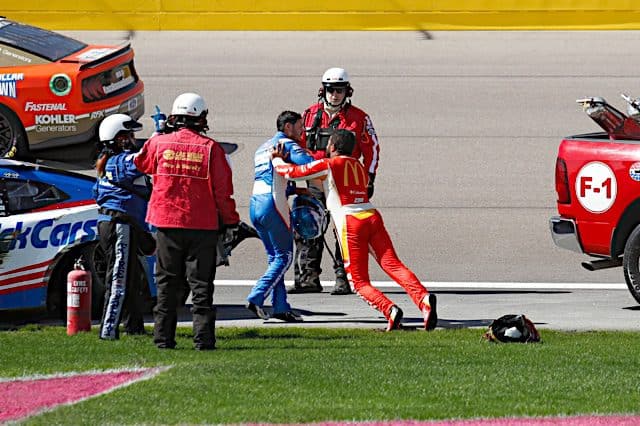 Early on, Bubba Wallace was the class of the field, winning stage one of the South Point 400 Sunday (Oct. 16) at Las Vegas Motor Speedway. What was an excellent day came to a screeching halt at the end of lap 94.

Wallace had dropped back a little after the restart and was racing for position with Kyle Larson and Kevin Harvick. Larson appeared to squeeze Wallace into the wall exiting turn 4. After the wall contact, Wallace came down the track, apparently due to the steering being broken on his Toyota, and hit Larson in the right rear corner. The resulting incident put both drivers hard into the outside wall. Christopher Bell, who was an innocent bystander, was also clipped by Larson and went into the wall. All three drivers were ok afterwards, but out of the race.

Wallace spins him out, and #NASCARPlayoffs driver Christopher Bell is involved! pic.twitter.com/TlxcEV5T6q

Wallace was not happy with Larson afterwards. Wallace exited his McDonald’s Toyota and walked down the frontstretch to confront Larson. After an exchange of words, Wallace shoved Larson multiple times, expressing his anger over a crash he believed that Larson was responsible for.

“Cliff [Daniels’] smart enough to know how easily these cars break,” Wallace told NBC Sports’ Marty Snider outside of the infield care center. “When you get shoved into the fence deliberately like [Larson] did, trying to force me to lift, the steering was gone [after that]. [Larson] just so happened to be there.”

When asked if the crash was direct retaliation for Larson putting him in the wall, Wallace sternly told Snider to “stop fishing.” That means that Wallace believed that Snider was trying to create a story out of nothing.

“No, [Wallace’s] reaction didn’t surprise me,” Larson said afterwards.  “I obviously made an aggressive move into [turn] 3. I got into [the turn] low, got loose and chased [the car up the track] a bit. [Wallace] got to my right front, got tight and got into the wall.

“I knew [Wallace] was going to retaliate; he had a reason to be mad. [However], his race wasn’t over until he decided to retaliate.”

Bell was the only one of the three drivers involved that was able to drive away on his own. However, Bell’s Rheem Toyota suffered suspension damage after his wall contact. The Joe Gibbs Racing No. 20 pit crew was unable to repair the car within the 10-minute time limit, resulting in a DNF.

With Bell still being involved in the playoffs (Larson was eliminated in Charlotte, while Wallace didn’t qualify himself, but the No. 45 was eliminated last weekend as well), there are championship implications to the incident. Bell ended up with a 34th-place finish after the race. Bell entered the race fourth in the playoff standings, but will not leave Las Vegas in such a nice position.

Wallace should be suspended for the rest of the season. An intentional full throttle 200mph hit on Larson is despicable. It was dangerous and not necessary. Drivers are retiring due to head injuries. Look at Wallace’s engine RPM’s. He went full throttle to catch Larson. It was no accident, then he was not man enough to admit it in the interview and lied. Wallace is swamp trash.

Bubba Wallace should be parked for the rest of the season. NASCAR should announce it immediately and escort his sorry @$$ off the property. Larson handled the situation like a professional after the whole incident and I applaud him.

Bubba is a racist, he definitely showed he does not like Japanese people. He tried to hurt Larson at 190mph, and then he lunged and attacked him before Larson could be taken away by ambulance. Plenty of air time on this one nascar so how are you going to give a slap on the wrist for this.

Bubba is right, I’m new at this being up front. What is nascar allowing your team to get away with. We all know you didn’t get better so it has to be the car.

I have watched this action numerous times. The article states Larson ran Wallace into the wall. He did not. Wallace hit the wall all on his own. The article also states Wallace lost his steering. How does the author know that? Because Wallace said so? I find not much of what Wallace says to be fact. Wallace did not like being run hard and he bumped the wall on his own. He retaliated by wrecking Larson then physically attacking him. This article is totally biased towards Wallace and we know why.

everything i’ve read this morning is biased towards wallace. i too didn’t see larsen get into wallace. maybe he took the air off wallace’s car, but that’s racing. you don’t go and run down someone and slam them with a 3000 weapon. of course it will be swept under the rug as a “racing incident”.

Bubba learned from Byron’s mistake that you don’t admit you retaliated. However, NASCAR has the data and can look at the steering wheel angle and the throttle trace. Even the announcers on NBC and PRN were calling it retaliation. And the unwritten driver code says you don’t right rear another driver, especially at a high speed track. Bubba initially hit the wall fairly flat on the side and probably could have continued on the lead lap had he not destroyed his car in the process of having an emotional meltdown.

Did Wallace exit his car prior to the arrival of the AMR safety crews? I may have seen a truck flash by but it had to be close. Regardless, his retaliation at those speeds and the current safety environment deserves a suspension.

I’ve seen other sources that called it a fight. Obviously it was a physical assault. Does Wallace get a free pass on that?

ALL Gibbs drivers, especially the up-and-coming entitled grandson, get a pass.

Wallace is the new face of NASCAR, and the media darling of Frontstretch and every other media outlet that covers NASCAR. NASCAR and their media partners are far to heavily invested in having Wallace become a star, to do anything more then to give him a slight slap on the wrist . He may be fined, but it will likely be minimal, and any points penalty won’t be enough to effect his or the team’s final position in the owner’s championship.

What Wallace did at Vegas is similar, but at the same time far worse, then what Gragson did at Road America. While Gragson did intentionally drive across a track to cause a wreck, it was at a track with no walls, and at a section of track where they might have been running 100-120 mph. For this Gragson was fined $35K and 30 points. While similar, what Wallace did was far worse since it was on an oval where they were surrounded by walls, and where they were racing at much higher speeds. This alone is reason enough for him to be penalized far more, if not sat down for a race or more. Unfortunately, I expect his punishment to be minimal.

What punishment? With all the publicity NA$CAR will get Blubber will get a hand-delivered envelope in a deserted parking lot at 3 AM from an anonymous fan. (nudge nudge, wink, wink)

To me this was like Hamlin forcing, but not hitting, a car into the wall. Larson never hit Blubber’s car and Blubber put his car into the wall on his own. He’s just like every other entitled driver of Reverend Joe in that nothing is ever their fault. And I don’t think Larsen should take any blame for the racing incident since Blubber did it to his own car. I hope Little Gibbs is paying attention.

Your right, Larson didn’t touch him as I looked at it frame by frame. Yahoo sports and other other racing sites calling out bubba for being anti asian. On live tv this time, not a noose bubba says he found.

Maybe Wallace was trying to do what the Entitled Ty Gibbs did to Gragson a couple of weeks ago in Xfinity – touched the wall so he went down the track and door slammed Gragson but no one wrecked. I’ll bet Bubber’s intention wasn’t to hook Larson and get caught up in his own mess and take out a Toyota teammate in contention for the championship all in one fell swoop. Like what was once said about Danica Patrick – you have to learn to wreck them without taking yourself out.

” Tempers flare”? That’s plural, I only saw ONE temper flare, and it belongs to a low talent, low IQ showboat. Na$car is such a joke anymore, petting and apeasing this Wana be. Let’s see how they spin this.

The penalty will be issued for pushing a NASCAR official.

Why is bubba not penalized. He also pushed a official when he was walking away.I used to like bubba now he is a big complainer