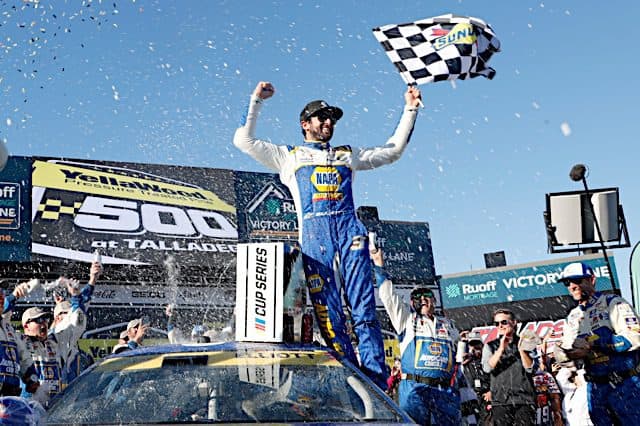 So, here we are. Just four races and 24 days remain in the 2022 NASCAR Cup Series. 234 days have passed since the Daytona 500 when the Team Penske’s rookie, Austin Cindric, was the unlikely winner of the 64th running of the Great American Race. Eight drivers remain alive in the quest for a championship and only two of those wheelmen have won it all before – Joey Logano in 2018 and Chase Elliott in 2020. Statistically speaking, then, there’s a 75% chance we’ll be crowning a new champion when all is said and done at Phoenix Raceway on the afternoon of Sunday, Nov. 6.

On paper, however, you can make a very strong argument for a second title for just about everyone’s favorite driver Chase Elliott. He leads the series in wins (five), top fives (12), top 10s (19), laps led (803) and average finish (11.8). But he’s also opened each round of the playoffs so far with a subpar effort, recording a 36th-place run at Darlington Raceway and a fiery 32nd-place finish at Texas Motor Speedway. Sure, he’s got a nice points cushion but another sluggish start to the final round could quickly put him in jeopardy.

This time last season, there was something of an inevitability to Kyle Larson’s first Cup title. He had just won at the Charlotte Motor Speedway ROVAL, his seventh victory of the year, and would go on to win three of the next four including the all-important final race at Phoenix. But given the way this season has gone, what price would you give on a Ryan Blaney maiden title (with zero wins) or Chase Briscoe making it to the final four and doubling up in the desert. Heck, how about a Ross Chastain title after all the trouble he’s caused and all the talk of retaliation.

See also
Did You Notice?: The NASCAR Struggle for Power Is Real. Can It Be Stopped?

Truth is, it could very easily be any of the eight drivers remaining in contention. Parity has very much been the word of choice in 2022 as perhaps best evidenced by the fact that we’ve had 19 race winners and we still have a goose egg in the wins column in for the aforementioned Blaney, Martin Truex Jr. and Brad Keselowski – three drivers you would almost bet would have a victory at the 90% complete marker.

Perhaps the bigger question is whether or not parity is actually a good thing. On some levels, of course, it is — a more equitable playing field creates opportunities for drivers and teams without the benefit of massive budgets or the favorable ear of the powers that be when it comes to perfectly legitimate penalties. But what it also does is bring an already super tight field even closer. Passing, which let’s be fair, wasn’t exactly at a premium, has become even harder. Some races have felt downright processional — Formula 1-esque if you will — just without Ferrari stumbling into some wacky way to screw up, Max Verstappen finding some new way to win and a smug looking Christian Horner in a too tight sponsored shirt.

Some of this is down to all the mandated spec parts. As Kevin Harvick noted after his car erupted into flames, not as a result of engine failure, at Darlington: “I’m sure it’s just crappy parts on the race car like we’ve seen so many times. We haven’t fixed anything. It’s kind of like the safety stuff. We just let it keep going and keep going.” Simply put, teams need the ability to innovate, to blur the boundaries, to smooth the edges and the new car doesn’t really allow for that much beyond air pressure which leads to a whole slew of different problems.

There’s a reason “if you’re not cheating, you’re not trying” has been such a NASCAR cliché over the years but there literally doesn’t seem to be a way to even attempt to cheat. Denny Hamlin, let’s not forget, had a victory — an actual victory — chalked off at Pocono Raceway because of a simple additional piece of tape. More and more we live in a world of absolutes. Everything nowadays has to be black or white. You’re either on one side or the other. Shades of gray and nuance feel almost like they’re a thing of the past. And so, it goes with this new car.

So here we are, as I said to open up this column. Four races and 24 days to go and beyond saying Elliott has a good chance to make the final four, I’m not sure you can make many more predictions than that beyond straight guesses. At least three of the final four races should give us good racing and it is to be hoped that maybe the teams hit on something at Martinsville Speedway after the tremendously disappointing spring race. We’ll probably get some late (showtime) cautions too which will bunch up the field and lead to some inevitable chaos but other than that, I don’t really know what to expect. We’ll see in the next three-and-a-half weeks.

Every season is like no other. Predictions are pointless, like this season and last season and the one before that and… Any predictions for next season?

Bubba won’t win the championship and Reddick will make him look like what he is.