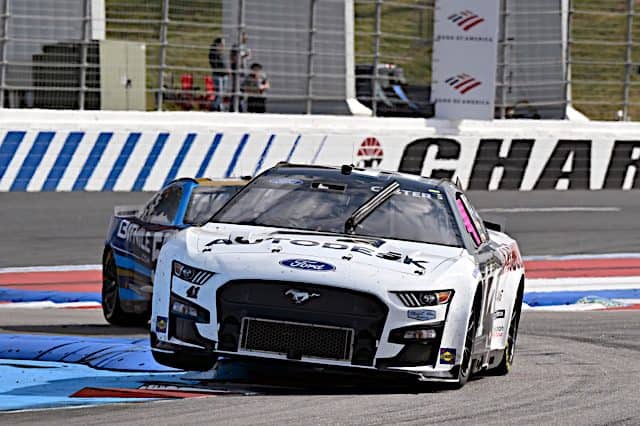 1. Everything had to go wrong for Kyle Larson to not make the Round of 8 … and it did

By his ridiculous 2021 championship standards, this hasn’t been the best season for Kyle Larson. After winning 10 times last year, he’s found his way to victory lane only twice, and he simply hasn’t been dominating races and leading laps the same way he did prior to the introduction of the Next Gen car.

Still, Larson entered this past weekend’s ROVAL race in great shape to make the Round of 8. He started the race in 18th, which wasn’t ideal, but he was in sixth place when the green flag dropped, 18 points ahead of ninth-place Chase Briscoe. Larson wasn’t safe by any means, but multiple things would have to go wrong for him to be eliminated.

Sure enough, that’s exactly what happened.

While running 13th, Larson made a mistake not often seen from him on a road course that led to him smacking the wall in turn 7. The damage to his No. 5 Chevrolet was diagnosed as a broken right-rear toe link, and while repairs were made, he lost five laps in the process.

That was a bit of a disaster in a cutoff race, but even so, his elimination required a handful of other factors to become reality.

One of them happened days before the race, when William Byron (Larson’s own teammate), won his appeal of a NASCAR penalty and got 25 points back. If not for that, Larson would still have advances.

With Larson running 35th, he might still have been fine, as long as no one below him in points won the race. But that happened too, with Christopher Bell capturing a win he needed to have to make the next round.

There was more, too, but Zach Vortex summed it all up ever so nicely on Twitter.

For Larson to be eliminated:
-Bryon had to get his 25 points back
-A caution had to come out
-Bell had to win out of nowhere
-He had to be trapped laps down
-Custer had to manipulate the race for Briscoe

And all of those things happened. Perfect storm of misery.

Drivers often complain about bad luck doing them in, but this is some next level stuff. There’s always next year.

2. Cole Custer drove his butt off to help his teammate advance but now may pay for it

If you’re old enough to remember NASCAR 06: Total Team Control, you probably remember that particular video game as a racing classic. It was also as ridiculous as it was awesome, because NASCAR races don’t work like they did in the game.

Except when they do!

Cole Custer sure drove like he was being given orders through a console controller on the final lap at the ROVAL to help Chase Briscoe out.

Kyle Larson is ELIMINATED from the #NASCARPlayoffs.

Chase Briscoe made some moves on the final restart to advance. pic.twitter.com/9LlsRluIot

Granted, Briscoe had to do some work too to make all of this pay off. But Custer’s move can best be described as a super block, and it’s no surprise that NASCAR is now reviewing his actions and radio transmissions to see if some kind of scheme was cooked up.

The thing is, the penalty for “attempting to manipulate the outcome of the race” is a loss of points and a fine. With all due respect to Custer, he hasn’t had the kind of season that means a points loss will mean anything. And the fine is a fine. Stewart-Haas Racing can probably help with that given what his help meant to Briscoe.

Just remember that EA Sports foretold this more than a decade ago.

3. Should the ROVAL become a traveling show?

The ROVAL was introduced to the Cup Series schedule at a time it was desperately needed, when NASCAR was desperate to hide the fact that racing on intermediate tracks largely sucked by creating less of those. Hence, one Charlotte race became the ROVAL event, and all was well for a while.

Alas, the Next Gen car has sort of turned this into a Bizarro Cup Series, where the intermediate track racing is great and short tracks and road courses have turned surprisingly dull in several cases. The most obvious thing to do would just be to cut back on road course races (we’ll assume NASCAR is already working night and day to fix short track racing), but here’s a more creative solution: Why doesn’t the ROVAL change locations each year?

It wouldn’t actually be called the ROVAL, since Charlotte has trademarked that term, but you get the idea. Where there is room enough to do a part-oval, part-road course layout, make it so. Obviously this only applies to intermediate tracks with road course capabilities, so that limits the possibilities. Though Daytona has its road course too …

That would keep the ROVAL concept fresh while simultaneously giving NASCAR more data on different road course sections and how they work for the Next Gen car. Not sure why anyone would be against that.

4. More and more, this looks like Chase Elliott’s championship to lose

Though he hasn’t dominated the way Larson did in 2021, Chase Elliott has steadily looked like the driver to beat the longer the season has gone on. He goes into the Round of 8 leading the pack in points by a significant amount: 20 above second-place Joey Logano and more than 30 above the cutoff line. He’s won before at Martinsville if he needs some last-minute magic to make the Championship 4.

He also seems … a little on edge after a run-in with AJ Allmendinger took away his shot at winning at the ROVAL. He didn’t want to talk to NBC after the race, and while he’s taking some flak for it from some corners, that might be the kind of focus he needs to seal the deal on his second title.

In other words, he seems more driven than ever. And it could be championship-level drive, particularly with where he’s sitting with four races to go.

5. Can all three manufacturers make the Championship 4?

Brand loyalty feels like it might be at a low ebb in NASCAR, but it’s still important to the manufacturers who pour money into stock car racing, and you can bet all three would love to be on the grill of the championship-winning car. Good news, then: They all very well may get a shot.

There’s incredible parity among the three makes in the Round of 8, with three Chevys, three Fords and two Toyotas still alive. Better still, there’s at least one of each in the current top four, so even if the next three races unexpectedly go chalk, everyone will still have a shot at Phoenix.

Things would have to go Larson-level wrong for all three Chevy or all three Ford teams to be among the four teams eliminated over the next few weeks. So the one worry would be Toyota, but Bell just showed he has a flair for the dramatic, and the other Toyota is driven by Denny Hamlin, who can’t ever be counted out.

Feels like they will be fine. And then for all the fans who still rally around a manufacturer, the championship race will be that much more interesting.

Anybody BUT The Golden Child Chase NOT talking to reporters are petulant, poor sports. And of course, HMS seems to have another beef that will go their way. SMH. Optics and history don’t mean a damn thing, shameless. NASCAR jumps pretty high! Why?

After 59 years of being a fan / participant in racing (NASCAR since 1965) I can no longer bear to watch the end of this season. When I viewed the list of what I call “least qualified” among the qualifiers for the so-called “playoffs”… that ended my interest to sit for 3 to 4 hours. So I read the news and view recap videos instead.
My #1 source of discontent has been the acceptance by NASCAR of the ‘Crash-To-Win’ nonsense. Far, far too many ridiculous crash-fests in the last 10-15 laps. They may as well eliminate the Black Flag from the flagman’s lineup.
I’ve long been annoyed and disappointed while witnessing NASCAR’s gradual self-destructive mode. Since Bill France, Jr passed it’s been a sickening dismantling of what we once knew as “racing”.
As for the constant redesigning of these Cookie-Cutter machines… this quest has resulted in major issues. Only now will they even at least pretend to admit they are causing physical harm. Anyone within the NASCAR circles knows very well they’ve kept this under the radar.
Road courses? With the exception of Watkins Glen, I personally see nothing of value in this growing trend.
These teams cannot possibly afford the labor hours and costs of making a car for every track! Much less do so safely, with the ability to pass the laser tests, and certainly not in a productive manner.
HINT TO NASCAR: Loss of sponsorship is not going to stop until you can fix yourselves.
When your top teams (multi-millionaires) can no longer survive without bringing-in financial partners, YOU HAVE YET ANOTHER PROBLEM. At the moment, a worse scenario in that Jack Rousch & Joe Gibbs are questioning their ability to continue.

So, Nick, the Roval is boring, and your suggestion is to move it around. Can’t it just be banished to the graveyard of bad ideas? The roval is not a road course, it’s a bastardization of service roads the infield converted to an abomination of stock car racing. Yeah, I sound like an old curmudgeon, which I am, but the roval genuinely sucks.

What I think is real funny, golden boy Chase Elliott a couple years ago after a run in on the track with Kevin Harvick. Well Elliott got the short end and then what chase proceeded to do was run as slow as he could to wait for Kevin Harvick to get within reach and purposely slowed to hinder Harvick from passing him. So now we are saying Cole Custer manipulated race. Come on man. Maybe Mr. H should throw more money at this issue for baby boy Mr.Elliott. NASCAR get your head out of the clouds.