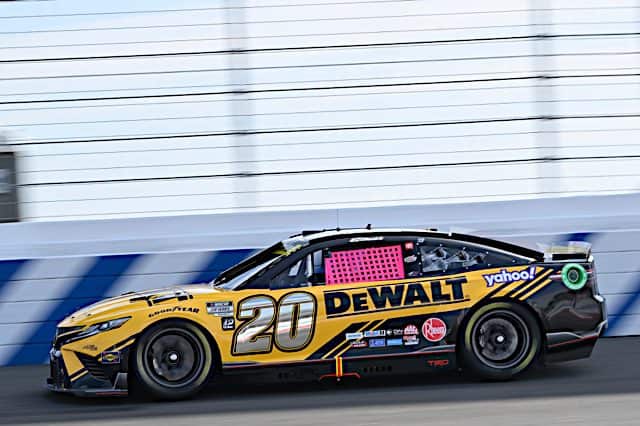 Christopher Bell took home the win in the Bank of America ROVAL 400 at Charlotte Motor Speedway on Sunday (Oct. 9) to advance himself into the NASCAR Cup Series Round of 8.

Kevin Harvick, Kyle Busch, AJ Allmendinger and Justin Haley rounded out the rest of the top-five finishers in an eventful affair. The only cautions of the race were at the stage breaks before an advertisement sign drew a debris caution, and then all hell broke loose with four laps to go.

Bell essentially had to win to advance as he entered the race 33 points below the cut line, but with his win and Chase Briscoe’s ninth-place finish, last year’s champion, Kyle Larson, was eliminated from playoff contention.

“Man, you just got to be there at the end of these things,” Bell said. “I keep watching all these races where the fastest car doesn’t always win. No secret that road courses have not been our strength year. We were just there at the right time. We obviously weren’t in position to win, we rolled the dice, gambled, it paid off for us.”

Briscoe spoke about his scraping by after the race.

“It took every bit of it there at the end, to be easily in and then the debris caution comes out,” Briscoe said, “(I) still thought we had a really good shot … I had no idea we were even going to have a shot (at getting in). Then I saw (Austin Cindric) wreck.”

This was the sixth walk off win in NASCAR playoff history, which placed Bell into elite company.

Trackhouse Racing had as bad of a day at the office as anybody could have asked for as both of its playoff drivers battled mechanical issues late in the race. Daniel Suarez had issues with the infamous rack and pinion steering system, while Chastain broke a suspension component causing his car to become nearly impossible to drive competitively before a quick fix on pit road.

Chase Elliot, Bell, Ryan Blaney, Joey Logano, Denny Hamlin, Chastain and Briscoe will advance to the next round of the playoffs, as Larson, Suarez, Austin Cindric and Alex Bowman were eliminated after the ROVAL.

The next Cup series race takes NASCAR to Las Vegas Motor Speedway for the South Point 400. The green flag drops at 2:30 p.m. ET and will be aired on NBC, the Performance Racing Network and Sirius XM NASCAR.

Playoff standings heading into the Round of 8:

NASCAR is reviewing data, video and radio transmissions from the 41 car following its incident on the backstretch during the final lap. NASCAR will communicate the results of the review early this week. Any potential penalties would not affect the Round of 8 field.

I hate when races cruise along with certain parameters and then a caution comes out with less than 10 laps which results in a total crapshoot ending (kind of makes you feel like watching the first 90% of the race was pointless).

With that says, I am fine with any of the 8 drivers left winning it all, except for one.

I feel the same way. Even about that one playoff driver we’re not really pulling for.

It’s a travesty that an advertising sign can blow out into the racing line and affect the finish of a race and the course of the playoffs. Without the caution it created there would have been a different finishing order and a different transfer scenario.