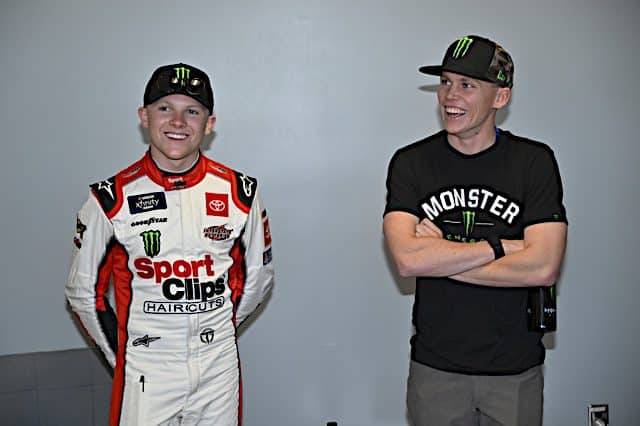 To avoid elimination in the NASCAR Xfinity Series playoffs, Riley Herbst needs to be on his A game this weekend at the Charlotte Motor Speedway ROVAL.

Herbst enters the cutoff race for the Round of 8 10th in points, but just 10 points below the cut line. But should Herbst fail to advance, 2022 will still have been a career year for the driver now in his third full-time season and second for Stewart-Haas Racing.

The 23-year-old has posted career highs in top fives (seven) and tops 10s (17) in a season and tied his mark for lead-lap finishes (23) with five races still to go. His average finish is the best its been (12.9), and even if eliminated, he could still finish top 10 in points for the first time in his NXS career.

Frontstretch caught up with Herbst prior to the NXS playoffs starting to discuss his 2022 improvements, his quest for his first win, dealing with criticism, his first friend in Charlotte (Ty Gibbs) and entering silly season with Kevin Harvick representing him.

Michael Massie, Frontstretch: You’re on pace to have career highs in pretty much every category. What’s been clicking this year compared to past years?

Herbst: I don’t know really know. We get that question a lot, which is good. That’s a compliment. But we do the same things. Honestly, it’s just been more consistent. Honestly, our finishes, we’d like our speed to be a little bit higher. We’d like to lead a little bit more laps, get some more stage points.

But all in all, it’s been pretty similar preparation wise and whatnot. So just consistency with the team is a big part.

Praying for my good buddy, and our engineer on the 98 car. 🙏
https://t.co/CaMWMeiuAX

Massie: You’re still looking for the first win though. Does that Daniel Hemric run last year inspire you at all, seeing him make the run through the playoffs and then get that first win and the championship?

Herbst: I don’t really know. I don’t really try to compare myself with anybody for sure. I wouldn’t say that. It definitely, I don’t know, weighs us down a little bit. We’re looking forward to winning, and hopefully, here tonight, we can. Just because of the quality of team we have, the quality of car and just the belief that we can go win is weighing on us a little bit. So hopefully we can get that off of our backs here shortly and get the win and go into the playoffs with a full head of steam and try to get to Phoenix [Raceway].

Massie: When the wins aren’t coming yet, there’s online criticism, social media, stuff like that. How do you block all that out and stay positive?

Herbst: Yeah, I mean, those people, that doesn’t matter to me. Like, I don’t read any of that. Just like last year, we’re focused on the No. 98 team and trying to perform the best we can each week.

I mean, yeah, we show up to the racetrack with the expectations to win the race and then move onto the next week.

Massie: I know some drivers, criticism kind of fuels them. Like Bubba Wallace at Kansas Speedway, it’s almost like the criticism was fueling him a little bit. Are you that way at all? Or do you just block it all out?

Herbst: Like to be honest with you, I’m not huge on social media. I really don’t read anything, just because it’s not worth my time. I’d rather focus on getting ready for the next race and enjoying time at the racetrack and enjoying what I get to do. I’m just grateful to be able to race for Stewart-Haas Racing and excited for tonight.

Massie: On the Dale Jr. Download, Ty Gibbs referred to you as like a brother when you guys were coming up through the ranks. What’s that relationship been like with Ty growing up?

Herbst: Yeah, it’s cool. I first moved out here to Charlotte when I was 17, right before my 18th birthday. And obviously my connection at Joe Gibbs Racing, where I raced there for quite some time, he was honestly my first friend out here. And we’d do everything together. I’d go to his house for dinner.

Massie: Is it tougher to maintain that relationship at all now that you’re a Team Ford guy, or does that matter at all?

Herbst: I mean I think relationships inside of racing and outside of racing take a lot of work. And so we try to keep in contact, but to your point, it is hard when we’re racing. But like I said, me and Ty, we’ll always be friends, and we’ll always have that bond. Like I said, I literally knew nobody out here in Charlotte when I first moved out here when I was 17 by myself, and Ty was my one friend at JGR, and he helped me quite a bit. So I’m just thankful for him and the whole Gibbs family.

Massie: Ty Gibbs talked about how you guys would you get mad at each other every now and maybe scrap a little bit. Who’s the better fighter?

Herbst: I don’t know. It usually got broken up between stuff like that. It was like brothers fighting, you know, just play fights and all sudden it gets serious. But no, I mean, it’s all harmless for sure. But yeah, I definitely respected the time with him and cherish him as a friend for sure.

Massie: SHR did have a Cup opening, but that’s closed with Aric Almirola coming back. Do you see Stewart-Haas Racing as like an avenue to get to Cup still?

Herbst: I mean, I’d hope so for sure. But I’m not really worried about that. … I want to win races here in the Xfinity Series. I want to compete for a championship, and hopefully one day, if I do do that and to my standards and to Mr. Haas’ standards and Tony’s [Stewart] standards, I am I able to go Cup racing ultimately. That’s my dream … to be a Cup racer and be a Cup champion. But first steps first is trying to win here in the Xfinity Series and compete for the championship.

Massie: Would you say that you’re Cup ready right now, or what kind of makes a guy Cup ready?

Herbst: I mean, who am I to say that? I have no standard to say that. I don’t own a Cup team. I’m just a racecar driver who wants to be at the highest level one day and competing wins.

Massie: How are the silly season talks going? Are you working to come back to SHR next year?

Herbst: Yeah, I mean, honestly, I’m very fortunate to get to sign with KHI, Kevin’s [Harvick] management group. So I kind of let him do it, handle all that stuff, so me and Richard [Boswell, crew chief] can focus on finishing out this year strong. But we’ll see how it plays out.

The @NASCAR_Xfinity race coming up at 5 p.m. ET on @USA_Network !

Massie: What’s Kevin Harvick like on that side? Because we only see him as driver Kevin. What’s manager Kevin like?

Herbst: Yeah, extremely, extremely brilliant. Very smart. He understands what runs this business. Obviously, he used to own race teams and whatnot. So he gets both sides of it, the driver side, the sponsorship side, the owner side. So he kind of helps somebody like myself, a young driver, kind of get pointed in the right direction, not necessarily on the track but off the track as well. He helps me out quite a bit.

Not much to see here folks.