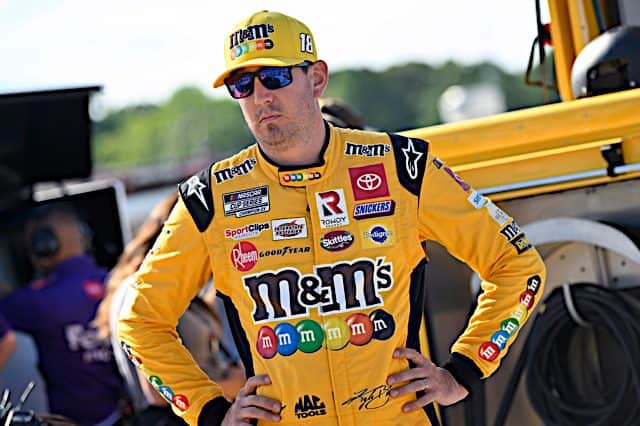 Kyle Busch will be moving to Richard Childress Racing in the NASCAR Cup Series in 2023, Jordan Bianchi of The Athletic reported Saturday (Sept. 10). The deal will reportedly be announced on Tuesday.

The two-time Cup champion has spent the last 15 seasons with Joe Gibbs Racing, but after M&M’s/Mars revealed that this would be its last season as a sponsor in NASCAR, the search was on for a new sponsor. No sponsor has been secured as of yet, leaving the door open for Busch to go to some other teams.

According to the report, Busch will likely join as a third member of RCR as the team presumably expands to three cars next year. Tyler Reddick is slated to join 23XI Racing in 2024.

See also
Fire on Fridays: RCR Needs to Go With a Free Agent This Time

Busch told reporters at Kansas Speedway, “I do not have any new news to share. If I did, I guarantee you there would be some sort of big announcement. Unfortunately, there hasn’t been one of those yet, Bob [Pockrass], we’re still working on it behind the scenes trying to put it all together, it’s not done.”

It will mark Busch’s first time in a Chevrolet in Cup since 2007 when he drove for Hendrick Motorsports.

The Athletic also reported that JGR will tab Ty Gibbs to replace Busch in the No. 18 Toyota in 2023. Gibbs is the grandson of team owner Joe Gibbs. Ty Gibbs currently drives for his grandfather full-time in the NASCAR Xfinity Series. Gibbs won the 2020 ARCA Menards Series championship and already has nine Xfinity victories on his resume, including a series-high five in 2022.

Wow. Kyle Busch heading for a second tier team. Perhaps he can give RCR the final push it needs to reach that top tier and compete for championships (but I’m not holding my breath). The part I can’t believe is that RCR is keeping Reddick and starting a third team. I would have expected for RCR to tell Reddick, “see ya”, regardless of the cost just because of the piss poor way Reddick handled the situation.

My guess is Childress’ commitment to the sponsors of Reddick’s car is the only thing keeping that from happening. Hard to turn loose of sponsor dollars these days despite personal feelings.

Good point but….
It seems like a lot of effort to start a third team knowing that the driver is leaving, especially if the sponsor isn’t going to stick around when that driver leaves. Maybe he figures he will put Ty in the car when Reddick departs but that seems unwise.

Charles
Reply to  Bill B

Austin Hill is getting the #8 car when Tyler leaves. This gives AH Another year in Xfinity before he moves up.

It may be that some additional announcements will come after certain drivers have been eliminated from the “playoffs”.

Where does Childress gets his engines. Kyle will not be in a second tier team.

Childress builds their own engines under Earnhardt Childress Racing name.

Didn’t Childress punch Kyle in the mouth a few years back? I guess business is business and it’ll be all smiles, handshakes and hugs at that Tuesday press conference.

I think it was Kurt. Wasn’t it?

Charles
Reply to  Bill B

It was even more fun then that. He put Kyle into a headlock and started punching him in the head.

I remember that deal, hold my watch. I always wondered why tough guy, Tony Stewart didn’t do the same thing when Austin Dillon intentionally took out SHR car, Aric Amirola for the Daytona 500 win.

Because he was going for the win. Not wrecking his car under caution.

The Kyle Busch feud with that driver (forgot his name) started few years back when Kyle was going for the xfinity championship and that driver wrecked him.

Just when we thought it couldn’t get any weirder!

Will believe it when I see it. If JGR couldn’t come up with the bucks for Busch (and his truck team), how is a much smaller team like RCR going to accomplish it? If I were betting I’d still bet on Kaulig as being the final stop when the musical chairs are over.

Watch all the Busch haters flip and say how he will do no wrong.

Put him in the #3. Austin can focus on bad acting in second-rate reality tv shows.

Baby Busch will get rid of his interest in Reverend Joe’s KBM Toyota truck team and I doubt he will start one with Chev on his own.

If Kurt decides his head still hurts and retires to a TV job then RCR can release Reddick to the 45 a year early leaving the 8 open for Kyle and Ty moves up from Xfinity to the 18.