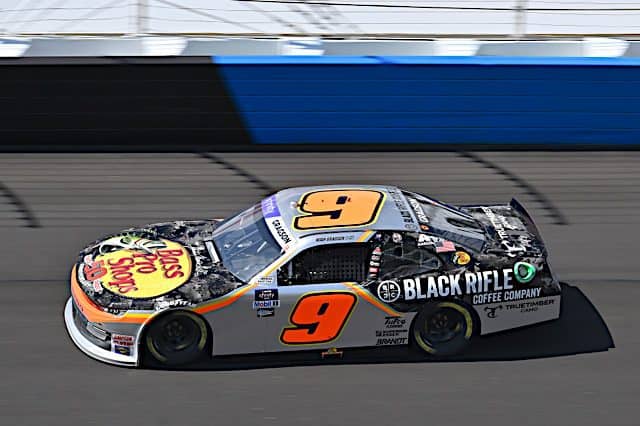 For the second week in a row, the rain came to the racetrack, ending the event on lap 94 out of 200 scheduled laps. Gragson got out into the lead in stage two and won the stage and his fifth race of the season. He ties Ty Gibbs for most wins on the year.

“It was tough, I don’t know if we had the fastest car there at the beginning of the first stage…,” Gragson told NBC Sports after the race. “I felt like if we would’ve went green, we could’ve kept working on it, working on it. I had a pretty fast car there, but I’ll take them anyway we get them. The (No.) 7 was fast, the (No.) 54 was obviously the fastest car all day. Extremely thankful. …”

Justin Allgaier placed second after he and Gibbs made contact coming to the line. Gibbs finished third after leading 66 laps. Polesitter Brandon Jones was fourth and Ross Chastain rounded out the top five.

Gibbs won stage one, and as the rain was coming closer to the track, Jeremy Clements ended up spinning near the end of stage two. This caution brought differing pit strategies, with Austin Hill and Ryan Sieg among those few to stay out.

That strategy didn’t work, as Hill and Sieg both lost a lot of spots. Meanwhile, Gragson threaded through and into the lead as others worked around those with older tires.

After the threat of rain brought the caution out near the end of stage two, NASCAR allowed the race to return to green flag conditions with two laps left in the stage. Gragson took first, while Allgaier and Gibbs banged into each other just before they crossed the line.

Then the rain poured, bringing out the red flag on lap 94.

Gragson couldn’t celebrate with a victorious burnout, but he earned his 10th career Xfinity victory and celebrated with fans as the rain continued to fall.

Sheldon Creed gained a few points on Sieg but is still 13 points below the playoff cut line entering the last race of the regular season.

The NXS regular-season finale is at Bristol Motor Speedway next Friday, Sept. 16 at 7:30 p.m. ET on USA Network.

Every time I see the 18 and 19 I think of Alias Smith and Jones!