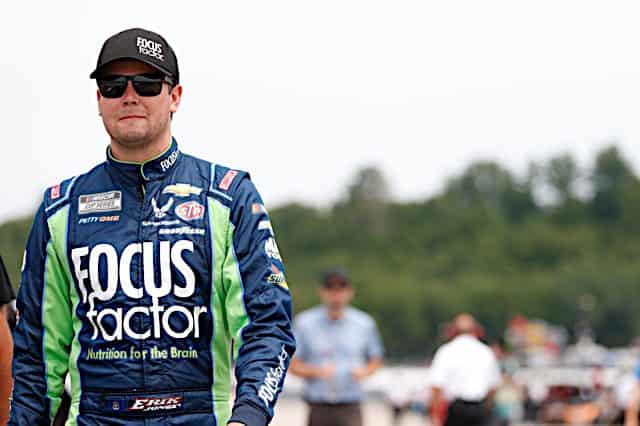 Darlington Raceway’s 2022 edition of the Southern 500 Sunday (Sept. 4) certainly brought about the throwback vibes it has inherited over the years. Mechanical failures, close-quarters racing and the iconic No. 43 in victory lane were on display in front of an electric, sold-out crowd at one of NASCAR’s brightest gems.

In 2017, NASCAR brought legendary figures into the booth to commentate for a stage during the Southern 500, including Hall of Fame broadcaster Ken Squier. Squier coined then-rookie Erik Jones “That Jones Boy,” and the nickname stuck.

Five years later, “That Jones Boy” is in a completely different situation. Instead of driving for now-defunct Furniture Row Racing or his three-year home of Joe Gibbs Racing, the talented driver is with Petty GMS Motorsports, which is in its first season after Richard Petty Motorsports merged with GMS. Together, the pairing has brought improvements and impressive runs, but there was still a donut in the win column … until Darlington.

For most of the final stage, it appeared a playoff spoiler would emerge, but it came in the form of Martin Truex Jr., who paced the field for 48 laps. Meanwhile, Jones ran steadily inside the top 10, solid but not a large threat to handle the Joe Gibbs Racing party of Truex and Kyle Busch.

That was until two crucial turning points in the final stage cleared the way for a Jones victory. The first came on lap 277. In the middle of green flag pit stops, Kevin Harvick’s car burst into flames and triggered a caution. Jones was running sixth and had not made a pit stop yet. While several cars were forced to take the wave around, the No. 43 restarted toward the front.

Jones was running fourth when then-leader Truex suffered a power steering loss and overheated, retiring him from the race. A caution for Cody Ware a few laps later brought the field to pit road. Jones’s crew had a strong stop, moving him up one spot to second. However, more trouble struck JGR when then-leader Kyle Busch lost an engine under the yellow. That put Jones in the catbird’s seat and gave him a legitimate shot to finally get his first win in the No. 43.

To do it, he had to hold off the winningest active driver at Darlington and another JGR veteran: Denny Hamlin. Lap after lap, Hamlin stalked Jones, looking like he would crush the hearts of the No. 43 team at any moment.

But that moment never came. Despite some close calls with lapped traffic, Jones crossed the line in first and shocked the NASCAR world with his third career Cup victory, snapping a 109-race winless streak.

“I get a hat. [Richard Petty] told me I get a hat if I win,” Jones said. “But Richard hasn’t been to victory lane at Darlington probably since he last won here. It’s just awesome. Just so proud of these guys, Petty GMS and FOCUSfactor Crew.

“We’ve been so close all year, and I didn’t think today was going to be the day. It was going to be a tough one to win, but no better fitting place. I love this track; I love this race. On that trophy twice, man. I was pumped to be on it once, but to have it on there twice, pretty cool.”

The victory is fitting in several ways for the 26-year-old driver. In order to win, he took advantage of two JGR drivers’ misfortunes and bested another one, the same team that dropped him in favor of Christopher Bell following the 2020 season despite two wins with the organization. His most recent victory until tonight? This same South Carolina track, where he held off Busch to score his first Southern 500 victory in 2019.

Jones affirmed the trust Petty GMS placed in him with a multi-year contract extension in July. The No. 43 has finally returned to its days of being a contender and Jones will be one to watch for years to come.

If you are a statistics guru, this race was a dream come true. Jones is the first non-playoff driver to win the opening race of the playoffs. He becomes the 17th driver to win multiple Southern 500s. Jones’s No. 43 and Hamlin’s No. 11 are also the two winningest car numbers in NASCAR Cup history.

The win is also the first for the No. 43 since Aric Almirola won a rain-shortened race at Daytona International Speedway in July 2014. It’s the first win in a full-distance race for Petty’s signature car since John Andretti at Martinsville Speedway in 1999.

Jones was not the only one who benefited from the Harvick fire on lap 277. Michael McDowell also was on the lead lap, allowing him to propel forward from where he ran most of the night. McDowell finished sixth, adding to what has been a career year for the veteran driver. It is easily the best finish at Darlington for the Phoenix, Ariz. native, who now has 11 top 10s this season, more than doubling his previous career high of five.

See also
4 Burning Questions: Can Michael McDowell Win a Road Course in the Next Gen Car?

After 23XI Racing put Bubba Wallace in the No. 45 to compete in the owners’ points playoffs, Ty Gibbs was shifted to the No. 23 Monster Energy Toyota. Darlington certainly is no slouch for a young driver to learn and Gibbs handled it well. He ran inside the top 15 at various points throughout the race, culminating with a 15th-place result.

Several underdogs could not tame the Lady in Black. After having one of his best runs of the season, Corey LaJoie experienced issues with the fuel pump, relegating him to 24th. Todd Gilliland was only able to muster 28th after spinning into traffic in turn 2.

Cody Ware and Ricky Stenhouse Jr., meanwhile, were both roughed up. Ware spun early on and nailed the wall twice in the final stage, with the last one being too much for his No. 51 car and placing him in 32nd. Stenhouse hit the wall twice, practically hitting it head-on in stage two and cutting his race short. He ended up 35th.

Author’s Note: With 10 weeks left this season entering Darlington, I will recap the top 10 underdog moments since the turn of the century. They mostly consist of upset wins, but we have seen several underdogs give us memorable moments. To kick it off, here is one that didn’t result in a win, but won the hearts of many fans.

Matt DiBenedetto, Bristol 2019: Days after learning he would not return to Leavine Family Racing in 2020, uncertainty surrounded DiBenedetto. Instead of letting it ruin his season, however, he turned it into one of the most sentimental underdog runs we’ve seen in recent years.

In true Rocky fashion that he embraced in driver introductions, DiBenedetto stormed to the lead at Bristol with just over 100 laps remaining. He held it in the No. 95 car until 12 laps to go, when Hamlin snuck by and stole the victory, breaking his heart. DiBenedetto gave a passionate interview afterward, stating, “I’m not done yet.” A couple of weeks later, he was signed by Wood Brothers Racing for the 2020 season.

Underdog Scheme of the Week

.@ToddGilliland_ in for his green flag stop.

“Just really really loose at the end of that run.”

He is currently scored P25 pic.twitter.com/jZPi8y2vI9

Don’t wake us up ☺️ pic.twitter.com/bptTLjSCCl

The @PettyGMS No. 43 car is back in victory lane, shocking the #NASCARPlayoffs field with a win at Darlington. pic.twitter.com/v1hFWokkZ5

How could you fail to mention Brad Keselowski’s 7th place finish? We Kes fans have had a season to forget, so a little BadBrad love would be greatly appreciated.