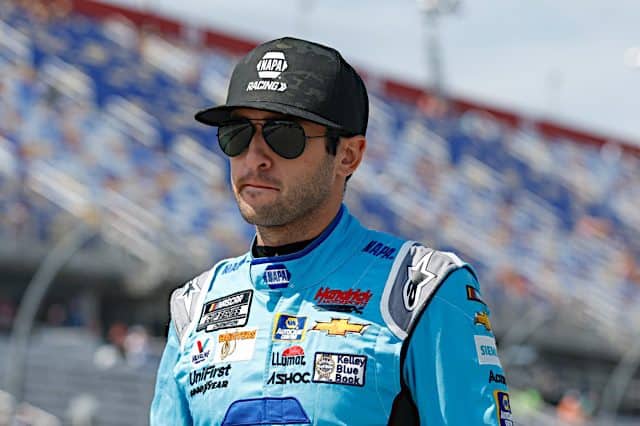 DARLINGTON, S.C. –  After initially refusing to visit the Darlington Raceway infield care center following his race retirement, NASCAR playoff top seed Chase Elliott stormed over to the small medical building in the middle of the 1.367-mile oval for his mandatory medical check on Sunday, Sept. 4.

When Elliott walked out of the care center, he said two sentences to media reporters and walked away.

When asked what he had to do for the next two races, he replied:

Despite Elliott’s slight smile, it was obvious.

He was angry, and he would not be the last to leave frustrated with the Lady In Black.

The tight-lipped Georgian driver was one of many in the playoffs that had endured a terrible first round of the 2022 NASCAR Cup Series postseason. One by one, the Track Too Tough To Tame, well, tamed the efforts of several playoff drivers through various mechanical failures, from broken toe links to blown engines. Those woes sent them deeper into the playoff field with some ground lost already in the first round.

It started with Elliott.

His evening didn’t start positively. The No. 9 Chevrolet rolled off 23rd on the grid, which was the lowest-starting team out of the 16 drivers in the playoffs.

Despite that, Elliott had plenty of time to work his way to the front and add more points to his already soft 33-point cushion that he had built over the regular season. After all, it was a 500-mile race, one of the longest of the year time-wise.

However, even after the first few laps, Elliott didn’t seem to go anywhere. In fact, the regular season champion stayed right where he was in 23rd.

Chase Elliott hasn't been able to make much progress so far. Still P23. Daniel Suarez is up to P30 after getting the free pass. 10 laps to go until comp caution.

It didn’t get any better, either. In fact, for Elliott it couldn’t have gotten much worse.

With only one lap to go in stage one, the No. 9 Chevrolet broke loose while entering turn 1. Elliott was sent into a cyclone and collected fellow playoff driver Chase Briscoe.

Not how either driver wanted their #NASCARPlayoffs to start.

Once his vehicle finally came to a halt, it appeared the damage wasn’t too severe. With some love, care and bear bond, the HMS machine looked like it could continue.

Then, Elliott’s car began crab-walking. It was a tell-tale sign of a broken toe link.

As he limped back to pit road sideways, it was clear the team would be on NASCAR’s 10-minute Damaged Vehicle Policy clock. The team failed to fix the broken piece in time, meaning Elliott’s first race in the playoffs was already over.

See also
Thinkin' Out Loud at Darlington: Chaos Leaves No One Safe In Championship Chase

The HMS driver entered Darlington as the top seed in the postseason. He left it ninth, only 14 points above the cut line.

Despite the contact, Briscoe continued on with a broken race car. The Hoosier completed the race four laps down in 27th but now is below the cut line, too, when it comes to the playoffs.

“I had a split-second decision there and just chose the wrong way,” Briscoe said about the incident. “We just had to keep going at that point.”

Happy was running in the top five and in a good position for a solid points day in the playoff opener during stage three. He was one of the few playoff drivers that was having a good day.

That is, until his car spontaneously combusted.

In a bizarre instance, a rocker panel on Harvick’s No. 4 had been lit aflame, transforming the Ford into a fireball traveling across the South Carolina speedway’s frontstretch before parking on the grass off turn 1. Harvick, thankfully, climbed out safely.

Like Elliott, the former Cup champion was very upset when media caught up with him.

Unlike Elliott, he had plenty to say.

“We don’t fix anything,” Harvick said critically of NASCAR. “Now, we’re just riding around out there, and the car just catches on fire because of (expletive) parts. They don’t care. It’s cheaper not to fix it.”

Harvick is now scored last in the playoff standings, 16 points below the cut line.

Complete bullshit… Was going to be a great night…

Truex appeared to have the upper hand. He pulled away from teammate Busch even after the final green flag pit stop and simply had to remain out front and cruise to what should have been an easy victory.

All of a sudden, his motor started to run hot.

Truex reported an issue in his engine and began to lose speed before being overtaken by his JGR teammate. The No. 19 was forced to retire mere laps before what could have been its first win of 2022. While the driver of the No. 19 is not in the playoffs, the teammate he relinquished the lead to was.

After a caution flag waved, the field pitted with less than 20 laps to go in the 367-lap event. Busch came out first ahead of Erik Jones, and after leading a race-high 155 laps, he could almost feel the Johnny Mantz trophy and a ticket into the Round of 12 in his hands already.

“You can’t pass,” Busch said about winning the race off pit road. “So, right there leading, being number one off pit road with 20 to go is a certified five points and an automatic ticket into the next round.”

Then his engine began to sputter.

Under caution, the frontstretch stands erupted with cheers as the yellow No. 18 Toyota rattled by the fans with smoke billowing out from underneath. JGR’s two best chances at winning were gone within mere minutes due to engine failure.

These two cars were running first and second just a few laps ago. pic.twitter.com/hN6mmoOxI7

While Truex didn’t stick around, a disappointed Busch did.

As the playoff dominoes fell, one after another, points implications began to pile up. Drivers that were once in the top half of the playoffs are now in danger of being eliminated.

Meanwhile, second seed Joey Logano now sits on top of the playoff standings, 38 points above the cut line, meaning he can rest easier knowing there’s a cushion with only two races left in the Round of 16. Or, maybe he shouldn’t take a breath.

After all, Elliott was leading the standings entering the playoffs, too. Now he’s ninth.

If this race has made anything clear, it’s that without a win, nobody is safe from elimination.

First off, its a toe LINK not a toe BAR. Second, did anyone tell you that the bar broke and caused the spin or did the contact with the other car and/or the wall cause the link and control arm(s) to break?
I don’t know…but I’d certainly ask before I wrote about it like I actually did my due dilligence.

Hi Johndawgchapman, you’re right on toe link. The mistake has since been corrected; Frontstretch apologizes for the error as (no excuse) both writer and editor were both finishing up this piece well after 1:00 AM.

To your point on whether it was broken before Elliott wrecked… no one knows. Elliott only gave two sentences to the press as an official statement so only he knows what happened for that car to snap out of control entering the turn.

Thanks as always for reading Frontstretch and keeping us honest.

To be fair, Truex did stick around and talk. He almost broke down in tears. I’m sure his off the track life is as big of a weight on him as the unbelievable bad luck on the track.

There may be some light at the end of the tunnel for Busch after all. While he hasn’t announced his 2023 plans as yet. I have to point out that both the Kaulig cars were running at the end.

” Find someone to run the show who can run it.”

If there was a real season-long real championship the bad finish at Darlington wouldn’t have as much weight. The law of unintended consequences strikes again. In NA$CAR thinking, the “undeserving” ones are supposed to be eliminated.

Why is the in-car camera of Blubber seen so much? This is one case where the eliminated driver SHOULD disappear along with the others..

Why is bubba’s car running so fast all of a sudden!