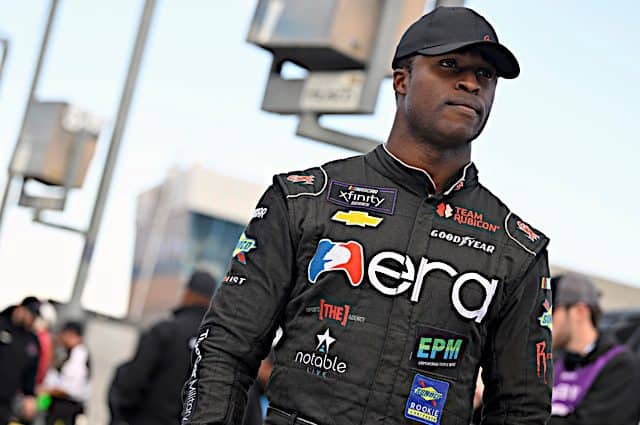 DARLINGTON, S.C. – Fresh off an 11th-place effort in the NASCAR Xfinity Series’ race at Daytona International Speedway last week, Jesse Iwuji and his Jesse Iwuji Motorsports No. 34 hit the track at Darlington Raceway sporting a tribute to one of Wendell Scott’s paint schemes and hinting at bigger future plans.

Iwuji and Kyle Weatherman have split the entry in 2022, with the 11th at Daytona Iwuji’s best effort of the year and an eighth at New Hampshire Motor Speedway the highest result from Weatherman, who’s also in the car for the Lady in Black.

“[Scott] was a trailblazer for the sport and NASCAR — the first black driver to win a Cup Series race in the sport,” Iwuji told Frontstretch’s Dalton Hopkins ahead of the race. “It was so cool to see that — I didn’t obviously see it in real life, but to go back and watch it and just see how the whole thing played out with everything he had to go through, he’s just a true, true pioneer in this sport, really helping pave the way for diversity.

We're honoring Wendell Scott this weekend with our @eracingassocia1 #34 Chevrolet Camaro SS. He was an amazing trailblazer for the sport and the reason why we selected our racecar number for the team. May his heavenly soul Rest In Peace, thank you so much for all you've done sir pic.twitter.com/nBHLcI9Obl

“It took a while to continue to diversify in the sport, but [I think it] has done a great job over the last few years really working on continuing to bring new faces into the sport. We have new owners, we have new drivers, we have all new kinds of folks coming from all angles of the world coming into the sport now. So it’s great to see that and we look forward to showcasing this car today here at this race.”

Weatherman has scored five top-20 finishes in 11 starts this year with the team, providing a boost to the organization co-owned by NFL Hall of Famer Emmitt Smith.

“And, with everything he’s gone through — all the different series he’s raced in, he’s even raced in Cup for a bit, so just all the knowledge he brought from that […] has helped us a lot. He’s more than a driver, he’s also a an employee for the team as well. He works on the cars, he’s at the shop every single day, he helps out there […] that’s kind of the person that we wanted to bring in.”

Iwuji said the team overhauled its roster and the changes have helped its performance.

“One of the biggest things, I think, is just really kind of helping us understand what kind of people we needed on the team, right?” he said. “We started off with one particular group, and it didn’t really work out well, [so] we’ve replaced every single one of them and now we have a complete new team of people, a complete new crew at the shop who also comes to the track as well.

“They’re absolutely amazing, very knowledgeable and just doing a really good job, and once we realized what we needed to do to change different parts and pieces of the organization, things got a lot better and now we’re trending in the right direction. So I think, without bringing him in, we wouldn’t have known what we didn’t know, and he’s been super helpful and helping us figure that stuff out.”

Iwuji then concluded with a teaser about the future of Weatherman and JIM.

“We plan on eventually expanding out and having multiple cars,” Iwuji said. “The goal is not to just have one car team in Xfinity for life — the goal is to eventually have a multi-car team, […] a Cup Series team. So that’s where we eventually want to go. Obviously, that takes time, it doesn’t happen in one day, but only people with great vision, people with great faith, people who just have drive and ambition can get to those points.