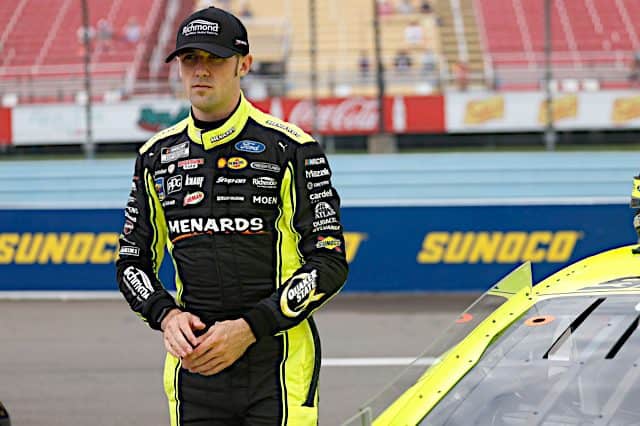 Of all the storylines that came out of the wild (and forgettable) weekend at Daytona International Speedway, there was one story that was glossed over by fans and media alike, perhaps even the driver in question.

Austin Cindric has secured the 2022 NASCAR Cup Series Rookie of the Year award.

If this accomplishment is news to you, you’re probably wondering, “How could it be? There are still 10 races left in the season!”

Well, Cindric made the playoffs. Yes, that’s all it took for him to lock in Rookie of the Year. His Daytona 500 win was enough to project him into the postseason, and because he is the only rookie to make it there, he is guaranteed the highest points finish of all freshmen, an achievement which automatically wins him the prestigious honor.

But just how prestigious is this award now? The Rookie of the Year is decided by season-end points, and although this criteria has worked for many years, the institution of the newest iteration of the playoffs means rookies who make it are the only ones who can compete for Rookie of the Year.

Usually, it isn’t an issue, as it’s very rare for a full-time rookie to win a race. But Cindric’s cakewalk to win this kind of award literally just happened two years ago.

See also
Did You Notice?: The Case For & Against Austin Dillon

Cole Custer stole his first and only career win to date at Kentucky Speedway in 2020, vaulting himself into the playoffs doing so. He was the only rookie to make the postseason, and therefore won ROTY after the 26th race of the season.

The problem? Custer was not the best rookie that year. His two NASCAR Xfinity Series rivals, Christopher Bell and Tyler Reddick, were having much better seasons than Custer despite earning no wins. Custer had no shot at the playoffs until his Kentucky triumph, while Bell and Reddick were dancing around the cut line the entire season up to that point.

Had Custer not won that race, he would not be ROTY, and Reddick would have instead taken home that award. Reddick deserved the award more than Custer, who would have finished 20th in a non-playoff points scenario, behind both Reddick (18th) and Bell (19th).

It almost happened again in 2016. Chris Buescher and Front Row Motorsports played pit strategy perfectly, as they were the leader at Pocono Raceway when weather forced NASCAR to end the race, giving Buescher the upset of the season. He made the playoffs and would have won Rookie of the Year if Chase Elliott didn’t also make the playoffs as a freshman. Elliott took home the award, but Buescher, a driver who almost missed the playoffs solely because he was fighting to stay inside the top 30 in points, finished second in the ROTY standings.

In the Xfinity and NASCAR Camping World Truck series, this issue hasn’t been a real problem, mainly because a lot of the drivers who make the playoffs anyway in those divisions are rookies anyway, keeping the battle alive for the award. But currently in the Xfinity Series, Austin Hill is on track to be the only rookie to make the playoffs and will therefore lock up ROTY seven races before the end of the season, much like Cindric.

Now, I’m not trying to say Cindric’s Daytona 500 win was a fluke, nor that Cindric doesn’t deserve to be in the playoffs. In fact, Team Penske’s young driver deserves the Rookie of the Year award, and he earned the right to compete for a championship. But Cindric shouldn’t win this honor solely because he’s in the playoffs.

Rookies locking up the award with almost one-third of the season left, whether it’s deserved or not, makes the award almost meaningless. How can we fairly decide a Rookie of the Year if all they have to do is win a race, then sit back and wait for the playoffs to win by default? How is that fair to rookies who genuinely have a good season but miss the playoffs, such as Reddick?

Cindric would more than likely lock up Rookie of the Year no matter what, as he is a step ahead of all the others in this year’s class.  The same goes for Hill in the Xfinity Series. However, these awards would (and should) feel more earned if they won by virtue of a season-long points battle.

The funny thing is ROTY is usually decided by a full-season slate, because rookies making the playoffs are so few and far between. Before 2020, the last rookie to win a race, make the playoffs and take home ROTY was Denny Hamlin, who was a rookie sensation in 2006 and won two races (a Pocono sweep). Hamlin 100% deserved to be Rookie of the Year that season, Chase or not. (The award was also decided by different criteria then).

But now that it seems likely for at least one rookie make the playoffs, it’s time to alter how the honor is awarded. Can you imagine if Todd Gilliland or Harrison Burton won a race and made the playoffs over Cindric? Just how “deserved” would that ROTY award be?

Not to talk down on rookies in lower-tier equipment, but there comes a point where drivers who have no business even making the postseason end up winning ROTY. It’s then the award’s name doesn’t make sense; at that point, why not call it the Highest Finishing Rookie Award? The Rookie of the Year should go to the rookie who put together the best 36-race season, not one who essentially lucked into the award because of one outstanding race.

Winning ROTY early should not overshadow Cindric’s accomplishment, however, as he has put together a great rookie season and now has a shot at going for a championship. If he were to win it in 2022, that would be an incredible feat.

However, if once is a coincidence (Custer), twice is a pattern, and it’s time for NASCAR to take action before the Rookie of the Year award becomes truly meaningless.

Since when it has ever been very meaningful?

The law of unintended consequences of the “rules” rears its head again over the decision of the brain trust in Daytona.

Stephen Leicht, Andy Lally, Kevin Conway, and Brett Moffitt are all Rookie of the Year. So that says something about the award. Ty Gibbs won’t be eligible next year if he moves to cup cause he will have raced more than 7 times.

Your wrong NASCAR decided on a case by case basis. Starts no longer matter

It’s not as big a deal anymore because either the winner is chosen by default or is wrong. Like in 2020 when Reddick was better all year and Custer ran 25th all year but won Kentucky, therefore winning ROTY simply because he had a win but Reddick didn’t.