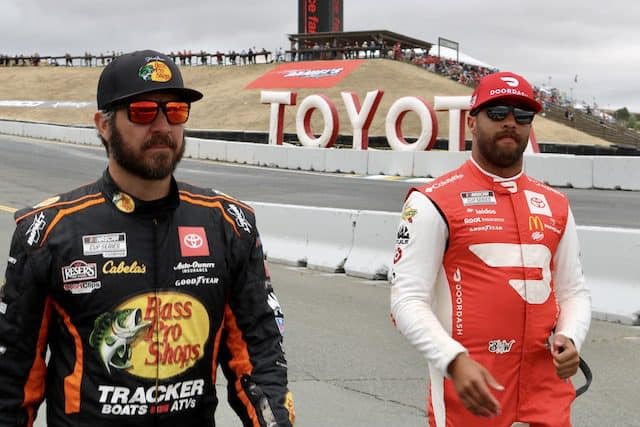 Since the NASCAR Cup Series elimination format debuted in 2014, only Bubba Wallace has won a race from outside the original field of 16, scoring an emotional first career victory at Talladega Superspeedway last October.

With 16 winners in the regular season alone and contenders like Martin Truex Jr., Aric Almirola and Chris Buescher on the outside looking in, you might think we’re on track to add to that total.

I just don’t see it happening.

I’m willing to concede there may be another rain-shortened race that produces a shock winner, and Talladega’s place in the playoffs is as wild a card as you can have left in the deck. But still, for the first seven years of the elimination format, only the chosen 16 captured wins over the final 10 races.

Why? The answer is simple: it’s crunch time. This format keeps playoff drivers on their toes and there’s too much at stake for all 16 to miss the front any individual week, let alone the fact eliminated teammates and manufacturer teammates will certainly do their best to keep out of the way.

Plus, nobody wants the reputation of ruining somebody else’s playoffs. There’s a reason the finale has always been won by one of the Championship 4 contenders.

We've been counting down the Top 5 Phoenix Raceway playoff moments.

Now, it may be likelier than years past that we get wins from eliminated drivers. With the manufacturer balance of power switching back and forth on a weekly basis but still only one winner locked in each race, we may see fewer full teams advance in 2022.

Denny Hamlin was NOT HAVING IT.

Considering how up-and-down this year has been, that’s something I won’t count out, although it’s far from going out on a limb to say the overwhelming majority of winners will be championship eligible from here to Phoenix Raceway.

Tyler Reddick pushed Austin Dillon to the win at Daytona. Was that enough of a peace offering to Richard Childress to resolve the conflict between them? -Harvey Q., Paramus, N.J.

While they haven’t yet buried the hatchet, Reddick at least started digging the hole.

Every time the NBC Sports booth reminds us that Reddick is joining 23XI Racing at the start of 2024 (which it seems they do every week), it turns the knife a little bit for Childress. At this point, the airing of dirty laundry between RC and TR has separated the successes of the two. We all think Reddick has one foot outside RCR and Childress is auditioning other drivers to take over car No. 8, and it’s definitely possible to will things like that into existence.

You definitely aren’t the first to ask this question after Daytona International Speedway, as Reddick himself answered it already.

Tyler Reddick said he didn't think about whether pushing Austin DIllon to the win would help smooth over any hurt feelings about his RCR departure following 2023. He said it was about helping a friend and a teammate. What Reddick and Dillon had to say about it: pic.twitter.com/ck42cNbcKt

“It wasn’t even on my mind, honestly,” Reddick told FOX Sports’ Bob Pockrass. “Just trying to get my friend, my teammate, fellow driver at RCR into the playoffs. You know, it’s not just my guys that deserve it, it’s everybody at RCR that works really hard on these cars.”

What a perfectly unsatisfying non-answer. Unfortunately, I believe him.

It isn’t just that Reddick played the good teammate, sticking behind Dillon throughout the final 16-lap green flag run and making sure the No. 3 crossed the line first. It’s that he’s continuing to do the job he was hired to do.

If Reddick’s second win of the year a few weeks back at the Indianapolis Motor Speedway road course didn’t snap the relationship back to normal, I see no reason that playing tail-gunner at Daytona will make everything perfect, either. While I recognize there is a difference between winning a race and taking one for the team, willingly letting one go, in both cases Reddick has shown he’s as dedicated as ever to making RCR look good.

Maybe only Richard Childress can say something to indicate he’s still miffed at his driver but also that he has a “heck of a shot” to win a Cup title.

Some of Childress postrace at Indy: pic.twitter.com/AftL7vdl66

But this isn’t a rational conflict. Reddick, technically, is fulfilling his technical obligations to RCR as written on paper. Childress isn’t mad Reddick is leaving, rather that his driver treated him more adversarially than expected at the negotiating table.

Certainly, both parties recognize that there is more to gain over the remaining term of Reddick’s deal if they’re allies rather than enemies. But trust isn’t easy to regain once it’s lost.

Each moment like Indianapolis or Daytona earns a bit more of that trust back, and the best thing Reddick can do is continue to show up to work every day as dedicated as ever to achieving success with RCR.

It isn’t as though Childress is going to sabotage Reddick’s playoff hopes. He certainly recognizes that Reddick performing well makes his team look good and attracts the kind of top-level drivers he’ll need to return to the front of the pack. Without Reddick winning for RCR, I frankly doubt anyone would give the current Kyle Busch rumors the time of day.

Busch is the last big Silly Season domino to fall. But no matter where he ends up, it looks increasingly likely Reddick will indeed return to RCR for a full lame-duck schedule in 2023. While there’s no one solution to the schism, a fully-committed playoff campaign from both parties will go a long way toward healing the divide.

See also
5 Points to Ponder: Will the Grass Be Any Greener Than it is Now for Tyler Reddick?

This is the most wide open the championship has been in quite some time, and while I hate that as somebody who wishes we could go back to a season long format, I’ll admit, I’m a bit excited to see these Playoffs more than any year since probably 2014. Even without the Playoff drama though, these last 10 races should be incredibly fun to watch regardless, considering how well the car raced at every Playoff track except Texas(horribly broken track regardless of car) and Martinsville(who knows what went wrong) Darlington seems to outdo itself each time we go there, and the 1.5 mile tracks have raced incredibly this year.

Yes, in particular the last few races – you know, the ones where every other car except those still in the Chase are putting around trying not to affect “the championship” contenders. It’s been a long-time now since NASCAR took their own “sport” seriously, and consciously decided to abandon long-term fan building for an exciting “entertainment racing product” that resembles the WWF (sorry wildlife fans – it’s the WWF). For me the season became 10 races shorter after I observed Harvick wreck the field intentionally at Talladega, to his benefit and all in the name of “the championship”.

It’s time to change the company name to NA$CAP…National Association for $tock Car Automobile Product. It can’t be NA$CARP because they took the “Racing” out of the equation.

Jack, you don’t see a scenario where Kurt retires for health reasons, Childress release Reddick from his contract and hires a new driver for 2023, someone like Josh Berry, and Reddick moves to the 45 a year early? What are the alternatives if Kurt retires? Kyle isn’t going to take the ride for just one season. He probably has a sponsor conflict with Monster Energy unless Rowdy Energy Drink, which is privately held, is distributed by the Coke/Monster alliance. 23XI has said they don’t plane to expand any time soon.

Childress didn’t sign Reddick to a longer contract. Richard blew it plain and simple. Everyone could see the talent Reddick has, and someone jumped at signing him.