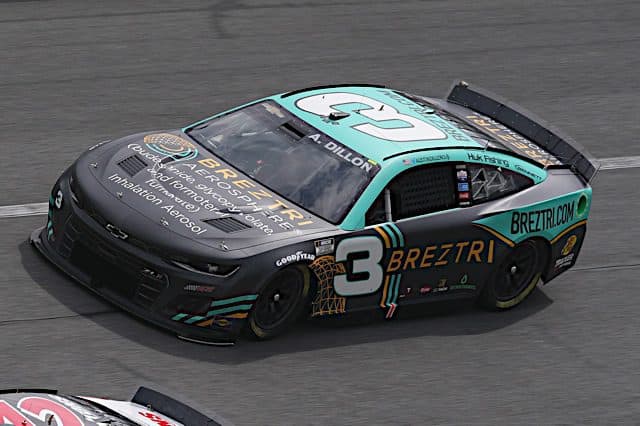 It wasn’t the night race promised, but in mid-afternoon on Sunday (Aug. 28), after multiple rain delays and multi-car crashes (sometimes simultaneously) Austin Dillon came out on top in a 10-car, 16-lap shootout to end the Coke Zero Sugar 400. Dillon earned his fourth Cup win and first of the year, locking himself into the playoffs.

“The playoffs, man,” the driver of the No. 3 told NBC Sports from the frontstretch after the race. “It’s crazy. You just never give up and have faith. We’ve had some tough finishes this year, like Charlotte [Motor Speedway]. I beat myself up over that. … Today we finished it off, and I’m so proud of these guys and glad to be going to victory lane.”

Eighth wasn’t good enough for Martin Truex Jr. to advance on points to the playoffs, while David Ragan and Kyle Busch completed the top 10.

With Kurt Busch waiving his waiver days before the teams headed down to Florida, Ryan Blaney and Truex entered the weekend as the last two drivers able to enter the playoffs on point. Surely, they hoped for an easy day at the World Center of Racing.

Unfortunately for both, their races were anything but.

The battle for the final playoff spot in a nutshell. #NASCAR #CokeZeroSugar400 pic.twitter.com/Q2hNeLm7xr

With five laps remaining in the first stage, Erik Jones got loose on the bottom, and the ensuing stack-up sent Denny Hamlin and Blaney spinning in front of the field, collecting Christopher Bell, Brad Keselowski, Kevin Harvick and others.

If Martin Truex Jr. catches him in points and we get a new winner below them in points (in the top 30), he'd be out of the playoffs.

That left Blaney wounded, nearly getting eliminated through the damaged vehicle policy before spending the rest of the race off the pace. Finishing six laps down, the door was open for his rival to capitalize.

Truex earned points in both stages, closing the gap to just 10 points at the start of stage three. As the tension picked up with weather approaching in the final stage, contact between Michael McDowell and Reddick at the front of the field sent the No. 34 backward into the pack, collecting Corey LaJoie, Ross Chastain and William Byron while critically ripping the right-front fender off of Truex’s No. 19.

Martin Truex Jr. is among the many involved in this one at @DAYTONA. #NASCAR

That left Truex vulnerable. Within the final five laps, the crucial move came when the Rick Ware Racing Ford duo of Ragan and Ware shuffled him out of the draft. Combined with the new winner in Dillon, that knocked Truex out of the postseason by a mere three points.

Speaking to NBC from pit road, Blaney said, “Getting torn up early, at that point our fate was definitely not in our hands … a lot more stressful than I would have wanted coming into here, but I just gotta give a lot of props to the [No.] 12 group for fixing it and sticking with it all day. That’s why you do it … definitely a rollercoaster of emotions, but luckily it ended on a high.”

Blaney will be the only driver winless in 2022 to compete for the championship over the final 10 races, but it is worse for Truex. After finishing the playoffs first or second in four of the last five years, Truex will spend the rest of 2022 fighting for 17th place in points.

“Just not fast enough to keep up with those guys.” the New Jersey driver told NBC’s Parker Kligerman. “We got the restart we needed and got in a decent spot there, just couldn’t keep up. I was wide-open the whole last run there. It’s a shame, it stinks, but you know, just too much damage to have enough speed to do what we needed to do.”

The drama at the bubble wasn’t the only big story out of Daytona.

With 23 laps to go, the full field drove three-wide into turn 1, fighting for a win and a spot in the playoffs.

The raindrops hit the camera lens just before the leaders hit the wall.

BIG CRASH in Turns 1 and 2 and Daytona!@austindillon3 SOMEHOW avoids all the mayhem and comes out in the lead! #NASCAR

Almost unbelievably, from 23rd place, Dillon was the only driver to get through cleanly, inheriting the lead after being a lap down just a few laps prior.

For hour after hour, Dillon sat in a temporary victory lane, waiting for word to be handed down the race was over. As he did so, NASCAR VP of Competition Scott Miller joined the NBC booth to explain the officials’ decision making.

“We had all the information … nothing had hit,” said the former race-winning crew chief. “[The] pace car was sitting there on the inside and it was still dry … we really couldn’t do anything about that. It’s not something you can predict, when it starts raining.”

Improbably, the skies cleared and the Air Titans got to work. After a three-hour delay, NASCAR announced that the final 21 laps would resume at 4:10 p.m. ET. Moments later, Dillon took his No. 3 Chevrolet to victory lane in one of the sport’s more improbable finishes.

“There’s something about Daytona,” Dillon said. “When you pull through the tunnel, things just happen here. It’s an exciting place.”

After a bright-and-early 10 a.m. ET start, polesitter Chase Elliott led much of the first stage before Erik Jones and Hamlin brought the second lane to the front. After the Jones/Blaney crash set up a one-lap shootout, it was ultimately Logano who scored his fifth stage win of 2022.

Stage two brought some underdogs to the front, with Bubba Wallace, LaJoie, Jones, Chris Buescher and others leading laps. But in the end, a spot of Toyota teamwork earned Kyle Busch his second stage win of the year with Truex claiming nine much-needed stage points in second.

The Daytona headlines were stolen by the rain-related wreck, but Chase Briscoe also nearly overturned with 36 laps remaining in a scary incident all its own after contact with Bowman sent his No. 14 Mustang spinning through the tri-oval. The roof flaps deployed and Briscoe, like all other drivers involved in accidents today, was checked and released from the infield care center.

Fortunate to see @ChaseBriscoe_14 come back down on all four wheels after this one. #NASCAR pic.twitter.com/TSNvyaPXny

With the regular season complete, the NASCAR Cup Series begins its 10-race playoff Sunday, Sept. 4, with the Cook Out Southern 500 at Darlington Raceway. The race airs at 7 p.m. ET on USA Network.

Introducing the 16 drivers who will compete for the 2022 NASCAR Cup Series championship! #NASCARPlayoffs pic.twitter.com/fjsaleI3f1

Truex is our, good, one of the reverands best cars didn’t make it. Dillon will be out soon enough. Hamlin has been the strongest car of late, hope he doesn’t win it all. And no bubba.

I would have rather had Truex make it than any of the other JGR cars. Dillon making it will be good for his TV show if they are still making new episodes (I wouldn’t know, you couldn’t pay me to watch it), but yeah, he should be out in round 1. Glad Bubba didn’t make it only because we won’t have to hear the media fawning all over him for the next three weeks (then, much like Dillon, he would be done anyway). And finally, Hamlin has had fast cars all year but has found new and exciting ways to choke and give away good finishes. Here’s to him keeping up that good work.

Amen to everything you said. As for Austin Dillon, I’m glad that he won it on the track and didn’t win because he was lucky enough to sneak through the big one unscathed and then handed the win because of the rain. That would have really left me pissed off.

Well, he kind of still won it by being lucky enough to sneak through the big one unscathed because there were literally no top tier cars left without some damage. But I know what you mean, he still had to get back in the car, bump Cindric out of the way, and get the win by taking the checkered flag.

If there were no TV time outs the example of Brian’s product would have been over before the rain delay. What a farce! It played out just like they and the network wanted. They couldn’t have scripted it any better except for Marty instead of Blaney. Did CNBC show the ending? I watched it on TSN2.

Yes CNBC stayed on air through the entire red flag. They re-showed the entire race up to the point of the red flag, although I had switched to watching the Orioles/Astro game personally.

How much do you charge Bubba to live in your skull full of mush??

Nobody comments on him as much as the writers do. He’s in their heads more than any one else. Right, Stubby?

Well, sparky, I was taught if you couldn’t say something nice about someone to just keep my mouth shut. Obviously your parents didn’t teach you that…

They told me to always tell the truth and don’t lie to yourself.

I thought you were taught better than this?

Yep, took him all of 2 days to completely forget his parent’s teaching. I’ll give him some credit that the time span is typically about 30 seconds in 2022.

Sounds like another typical S*** Show restrictor plate event, where the “race” is made up and driver skill doesn’t matter. Glad I had better things to do (watching paint dry would be a better thing to do, NA$CAR has set the bar’s pretty low for these events). The top 10 is very telling about what a farce these restrictor plate events are. But they got some good wreck footage for Fail Army, I mean, the marketing dept.