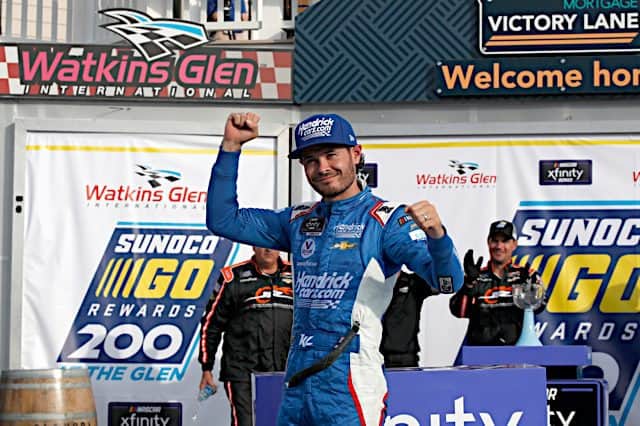 AJ Allmendinger, Sammy Smith, Noah Gragson and Kaz Grala rounded out the top five. Smith took the victory in stage one and William Byron in stage two. The keen Xfinity fan will notice some regulars missing from the top finishers, and that’s all thanks in part to a wacky day at The Glen.

Sammy. Freaking. Smith. The 18-year-old ARCA full-timer has absolutely showed out in some of the drives he’s gotten this season in the No. 18 Toyota for Joe Gibbs Racing. A Kyle Busch Motorsports staple in the ARCA Menards Series, the young gun managed his first Xfinity top 10, top five and first stage win all in one race.

If I were to make a brand new NASCAR movie, the main character’s name might just have to be Sammy Smith – it just sounds fast. He wasn’t just fast; He was very fast, and it’s earned him a spot on this week’s Winners list. Remember the name folks, he should be around for a little while.

Jeremy Clements keeps being a name that, in the Xfinity Series at least, revolves around road courses. After all, his lone win came at Road America in 2017. That rang true yet again as Clements was able to pilot his absolutely gorgeous No. 51 Chevy to a top-10 finish (10th). Some late crashes by two frontrunners sure helped him out (more on that later), but what really matters is where you cross the finish line and Clements even did that much in style.

Hard fought top 10 today @WGI in the bad ass pink @Whitaker_Chevy, @RunnersRoostOP, @diecast_b Chevy! Really proud of my guys for the mistake free day. We had a good strategy going but an untimely caution hurt us but was able to get back to the top 10 with a clean car. #NASCAR pic.twitter.com/fNRrHPOo4w

Ross Chastain has been a busy man lately. When he’s not pissing people off in the Cup Series, he’s been running some Xfinity races to get acclimated to some more challenging tracks. With that much workload, it’s completely understandable that a guy would want a little bit of a break.

What to do, then? A beach vacation, of course. However, if you look at a map of the race track, there is a noticeable lack of beachfront real estate. What’s the move, then? Why park your car in the sand pit of course – it’s the closest thing.

Chastain managed to bring the car across the line in one piece but did so in a less than ideal 28th place. He’ll undoubtedly be trying to avoid another unexpected beach trip Sunday (Aug. 21) as he rolls off the grid in 18th in the Cup race.

It’s a double whammy for the bottom half of our Losers list this week, with Ty Gibbs and William Byron each sharing the blame for a late race incident that took both of the frontrunners out of contention. Gibbs and Byron were door to door going into the esses with Gibbs on the inside. Could Byron have given more room? Absolutely, but that would have taken him so far off the racing line that it could have resulted in a single car accident, in which he would be the only one out of a position and potential race win.

Could Gibbs have eased off and went for the pass at a more opportune moment? Again, absolutely, but this is Gibbs we’re talking about. He didn’t do anything overtly dangerous, he was just racing. Not only that, but after the two had crashed, Byron decided to get back at Gibbs and spun him again as he reentered the field. Either way, both were running at the front the entirety of the race, and they brought both cars home well into the back half of the field. What a crappy way to end what would have been a good day for sure.

You guys have absolutely no idea how long it’s felt like I’ve been waiting for this one.

🧀 Excited to announce that @SargentoCheese will partner with @joshbilicki as primary at @WGI!

After Gragson’s crash earlier this year at Road America, Josh Bilicki had to swerve out of harm’s way in order to not be collected. The only obstacle? A car-width Sargento Cheese sign. I don’t know how much the company paid to place the signage there, and I sure don’t know how much this sponsorship deal is worth, but it was just too good of a story to pass up this week.

It’s looking like a fair share of drivers are going to have to make it into the playoffs on points alone this year, as with only seven different eligible winners the mad dash for the regular season finish line continues to heat up. Riley Herbst, Sam Mayer, Daniel Hemric, Landon Cassill and Ryan Sieg would be the final five if the playoffs started now, but with four races left until then plenty can happen. A full points report can be found here on here.

Call me crazy, but I always breathe a sigh of disappointment when I find out a successful Cup driver wins an Xfinity race, no matter the course. I’m not saying Larson is Buschwhacking by any means, especially since the guidelines won’t allow it. I just see a reigning Cup champion costing drivers like Smith a shot at his first victory, a victory that could ensure him a full time ride sooner rather than later. As it stands, Cup drivers with three or more full-time Cup seasons under their belt can run no more than five Xfinity races on the season.

That begs the question, though, should NASCAR put even tighter restrictions on Cup drivers that want to run Xfinity? I get they’re trying to find the happy medium between the drivers’ wants and the fans’ but some, including me, still say that five is too many. It’s a balance that’s been tip-toed around for years, and I don’t see that changing anytime soon, but this life viewer sure would like it to.

The Xfinity Series is off to somewhere with far more beachfront property next week. However, it’s a Friday night special. The Wawa 250 Powered by Coca-Cola at Daytona International Speedway run Friday, Aug. 26. Austin Hill won the inaugural race of the season at Daytona this year in the spring and has enjoyed quite the noteworthy season since then. He’ll undoubtedly be looking for a repeat, with the green flag dropping at 7:30 p.m. ET. That race will be aired on the USA Network, the Motor Racing Network and Sirius XM NASCAR.

What is the big deal about the Johnson crash. It is nothing compared to to Geoff Bodine’s in 1989. No safer barriers, just a guard rail. No bus stop, real race cars, real announcers and camera crew. Those were the days my friend…and they did end.

I remember well Dale Earnhardt’s 21 Busch Series wins. Seven wins in the Goody’s 300 at Daytona – the highest paying race in the series. His 5 wins in a row from 1990-94 when he won 4 Winston Cup titles and robbed Busch Series regulars every year are still a record. Would love to read more articles on Buschwacking that put one race at Watkins Glen against true Buschwacking! Lol, just kidding, it’s been going on forever.