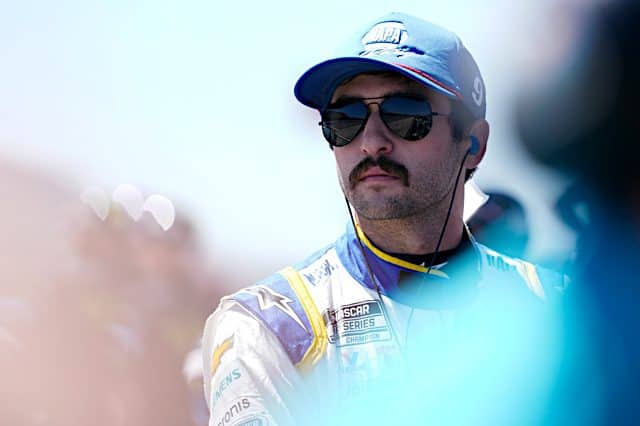 The NASCAR Cup Series takes a trip to the Hoosier State for some road course racing this weekend. Let’s see who will kiss the bricks in the Verizon 200 at the Indianapolis Motor Speedway road course Sunday, July 31 (2:30 p.m. ET on NBC).

The 2.439-mile racetrack is the fourth of six road courses on the Cup schedule, running clockwise instead of counterclockwise like on ovals. The 14-turn course features a long frontstretch and a straightaway between turns 6 and 7.

Of course, last year’s inaugural Cup event saw the infamous turn 6 curb break apart late in the race, causing multiple top contenders to crash out. Not exactly what IMS wanted its road debut to be known for, but Roger Penske and track officials learned from this mistake and installed a concrete curb in the area.

With just one race run on this layout in Cup, how can you prepare your DraftKings rosters for this weekend’s event?

First, take a look at who’s led laps there, both in Cup and the NASCAR Xfinity Series. Also, there’s been three other road courses this season where you can review who finished well and led some laps. But don’t forget about other recent road course races, as drivers who ran strong on them will likely perform well this weekend, too.

Pit strategy is also expected to be huge in Sunday’s race, as it often is on road courses. That said, I’d give the edge to a driver who starts inside the top five.

Before I move on to my picks for the Indy road course, here are the results from Pocono Raceway:

On DraftKings daily fantasy, disqualifications don’t count for where drivers finish on the racetrack, so Kyle Busch was scored in the runner-up spot. But Kevin Harvick, Austin Cindric and Chris Buescher all had trouble during the race, resulting in lower scores. (Had I known ahead of time that Buescher would qualify well, I wouldn’t have played him).

DraftKings Picks for 2022 Verizon 200 at the Indy Road Course

Once known as mostly a road course ringer, Chase Elliott has shown strength on multiple track types this season, earning four wins on ovals (and a triangle). But that doesn’t mean he hasn’t run well on this track type.

Elliott led 26 laps at Sonoma Raceway before coming home eighth. Then, at Road America, the driver of the No. 9 Chevrolet had quite a battle with Reddick before the No. 8 car passed him late. Plus, at Circuit of the Americas, he was fourth. It’s only a matter of time before the current points leader finds a way to win on a road course.

Daniel Suarez was one of the drivers who crashed late in last year’s event, so his finish doesn’t reflect how he ran. Instead, look at the Mexican native’s performances on road courses this season.

At COTA, Suarez was out front for 15 laps before encountering an issue and finishing 24th.

Then at Sonoma, the No. 99 earned his and Trackhouse Racing Team’s first career win in the Cup Series, leading 47 circuits.

Finally, at Road America, Suarez drove from 17th to fifth — quite admirable, considering how rough the racing has been on road courses this year in the Next Gen cars.

My only hesitation with Suarez is his salary; $9,400 feels awfully steep for someone who was previously $7,000-$8,900 over the last few months. But it could still work out if he earns his fifth straight top-10 result.

Austin Cindric has a bit more experience on the Indy road course than some other Cup drivers, as he won the Xfinity race last year. In the Cup event, he survived the chaos and brought home a ninth-place result.

This season, the road courses have been some of the strongest races for the Daytona 500 winner, as he’s earned top 10s in all three of them. Cindric was eighth at COTA, fifth at Sonoma and seventh at Road America. He showed tenacity at the Sonoma event, as he started way back in 25th place.

Though Cindric’s salary is above $9,000, he just might meet his value, even with a front row starting spot. Expect a top-10 finish from a rookie driver also expected to lead a number of laps.

I know it seems like Kevin Harvick is recommended a lot, but it’s for good reason. In every road course event this year, he finished further up from where he qualified. Harvick just missed out on a top 10 at COTA, but at both Sonoma and Road America, he gained several positions to finish fourth and 10th, respectively.

That’s seemed to be the case for much of the season, too, including at Charlotte Motor Speedway and Darlington Raceway. Harvick was third in the former after starting 18th, and he gained 31 positions in the latter on the way to fourth.

See also
NASCAR Mailbox: Why Is Nobody Talking About AJ Allmendinger?

It will be interesting to see how Harvick performs on the much flatter IMS road course, compared to some of the other tracks with different elevations. The road map is there, though for continued success.

Erik Jones had quite the race last year, avoiding the carnage and driving to seventh after starting 28th. He had a similar result at COTA earlier this year, advancing 21 spots to ninth place. And at Sonoma, he gained some positions then, too, though he only finished in 22nd.

Last week at Pocono, Jones came in ninth after starting back in 34th, a very strong run for the No. 43 Petty GMS Motorsports driver. And at World Wide Technology Raceway at Gateway, Jones began 21st and ended seventh.

It’s these kind of runs that can really boost your DraftKings score, since each position gained is another fantasy point. Hopefully, Jones will continue that upward trend this weekend.

After I decided on the above drivers, there wasn’t very much salary left over. But you could do worse than Todd Gilliland. I mean, he hasn’t been terrible in his rookie season (though he hasn’t been great, either).

One of his better results was at COTA, when he went from 29th to 16th. Then, at Sonoma he was 24th, while at Road America he gained a few positions and finished 25th.

Let’s face it; Gilliland likely won’t earn a top 10 this weekend. But a finish in the teens is not out of the question for the Front Row Motorsports driver after a career-best ninth-place qualifying effort.

You forgot bubba. In today’s Xfinity race he quit 7 laps down.