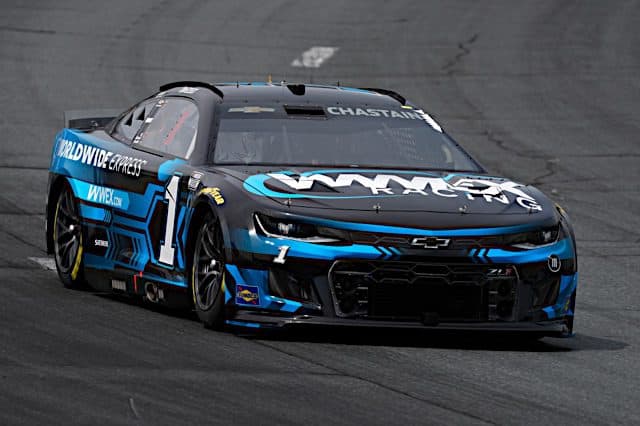 After Denny Hamlin exacted payback on track toward Ross Chastain at Pocono Raceway, should Chastain change his driving style?

Luken Glover: Ross Chastain does not need to alter his driving style. The only thing he needs to adjust is the decision-making process on when to be aggressive. At World Wide Technology Raceway at Gateway, his aggressiveness happened way too early in several moments. Chastain has always been aggressive, and combine that with a new car that has to be pushed to the limit, there are going to be some mistakes. Over these next five weeks, he needs to seek to gain as much momentum as possible for the playoffs while also trying his best to alleviate tensions with some fellow drivers.

Mike Neff: Chastain’s driving style is fine. His decision making needs to be changed slightly and he is working on that. He has admitted that himself. His aggressive nature is what has put him in the NASCAR Cup Series. Keeping that style will potentially win him a title. Backing off from that only hurts his chances of that.

Andrew Stoddard: No, he shouldn’t. NASCAR fans are always clamoring for its drivers to show more personality, to stand out from the crowd. Chastain does exactly that with his aggressive driving style and his penchant for smashing watermelons following victories. By allowing Chastain to be himself on and off the track, Justin Marks and Trackhouse Racing Team have reaped the benefits of multiple victories and staggering success in just the team’s second year of existence. Also, the Chastain/Denny Hamlin rivalry has been one of the more compelling storylines in a noteworthy 2022 Cup season, a talking point that may not exist if Chastain had a more conservative approach on the track. While incidents like Pocono will happen from time to time, Chastain is better off in the long-term being himself. At the most, he should only make small adjustments and be more selective with his aggression to make the transition from playoff driver to championship contender.

With his series-high four wins and points lead, has Chase Elliott emerged as the Cup championship favorite, or is it still too early to tell?

Neff: Favorites come and favorites go. Right now Chase Elliott is looking like a strong favorite for the championship. However, once the playoffs get here, someone can get hot and assume that position. With the collective abilities of Hendrick Motorsports behind him, he will most assuredly be in the late running for a title.

Stoddard: Yes, no question. Elliott’s current five-race stretch of first, second, first, second and first is unmatched by any other driver in the Cup Series this season. Furthermore, it happened at five very different tracks, showing the versatility of Elliott’s driving and the ability of Alan Gustafson and the No. 9 team to prepare the racecars. In a season during which parity has reigned supreme, Elliott is the only driver with an average finish in the top 10 at 10.0 even, over two spots better than Chastain’s second-best average of 12.2. Elliott’s 658 laps led also tops in the Cup Series. The only driver even close to Elliott in that category is William Byron with 611 laps led, a number that is slightly skewed by his 212 laps led in his Martinsville Speedway win. Elliott’s qualifying speed is also elite, as he is one of only four drivers with multiple poles and his 9.9 average start is good for fourth in the Cup Series. Make no mistake: the path to a Cup championship now goes through the No. 9 team.

Anthony Damcott: He has definitely emerged as the regular season championship favorite, but once the points reset for the playoffs, it’s going to be really hard to tell. I don’t expect the parity of the Next Gen car to just stop once the playoffs start, so even if Elliott makes it all the way to Phoenix Raceway, there is absolutely no guarantee that he will be the favorite because of how diverse the field of winners is this season. The best thing for Elliott to do is just ride the momentum he has now and keep it up to give him the biggest advantage into Phoenix as possible — if he makes it, that is.

Should NASCAR and the NTT IndyCar Series have other races in conjunction with each other, like this upcoming race weekend at the Indianapolis Motor Speedway road course? If so, where?

Stoddard: Yes, that would be great. If NASCAR and IndyCar collaborate more often, it will be good for the health of both racing series and American motorsports as a whole. This weekend at the Brickyard could see boosts in both attendance and TV ratings because of the crossover between the two series. Casual NASCAR fans could tune into the IndyCar race to see Jimmie Johnson in action, and IndyCar fans might watch the Cup and NASCAR Xfinity series races out of curiosity to see how open-wheel drivers like Daniil Kvyat and Santino Ferrucci perform in the stock cars. If this joint race weekend at Indy is successful, do not be surprised if NASCAR and IndyCar work together to add one or two more such weekends to future schedules. There are two tracks that stand out as great options for another crossover weekend. First, you have Gateway, which is already on the schedule for both series, has produced great racing and sits in a good-sized media market. Another good option is Circuit of the Americas, which is not on the IndyCar schedule but fits well with the series’ profile of racing on top-flight road courses. This is something that both NASCAR and IndyCar could explore down the line.

Damcott: I would have loved to see one at Road America, but with the addition of the Chicago street course that won’t happen. I’d also love to see one at Mid-Ohio Sports Car Course, because it’s my home track. The only other options would be Texas Motor Speedway — yeah, no thanks — or Gateway, which used to have the NASCAR Camping World Truck Series and IndyCar on the same weekend before the addition of the Cup race this year. But Mid-Ohio would definitely be my choice, even if it’s just the Truck Series racing there. This year they raced one week apart, so why not combine them into one weekend and get even more fans to the track?

Glover: The revenue woes of a move may be too risky for some tracks to have a desire for it, but the benefits carry a lot of weight, too. You can promote two premier racing series, which can bring a crossover of fans from each discipline. Plus, drivers from different series can get a front-row seat to the other if there is an interest to race in that series. Richmond Raceway would be a good track to do one. While Richmond has plenty of history, a new venture could be a fresh look. Fans in Virginia have been craving an IndyCar return to Richmond, especially with the 2020 cancellation, and NASCAR could use another headliner to add intrigue to the event.

With the Camping World SRX Series season complete, which race track should it visit next year?

Damcott: While I enjoyed attending the race at Sharon Speedway (again, home track), the track is too bare bones for a major series like SRX to come to, so I’d like to see the series at a track that would be ready for a bigger series like SRX — maybe test the North Wilkesboro Speedway market again in preparation for a future NASCAR event? Or perhaps Bowman Gray Stadium? I’d love to have a home state race again, so maybe the series heads to Toledo Speedway in a combination event with the ARCA Menards Series? I like the short track preference of the series, so in turn, there are several short tracks I’d love to see them go to.

Glover: Bowman Gray would be compelling to see the series visit. There is plenty of history at the track, and putting out some of the biggest names in American racing would only add a new page to the book. Plus, the track has been known for some hot tempers, and SRX featured plenty of that this past season. With a smaller field, it would be a perfect opportunity to get some big names back on the 1/4-miler.

Neff: Lucas Oil Indianapolis Raceway Park is always my go-to for this question but, thankfully, we are back there. The easiest answer is North Wilkesboro. Now that it is coming back to life, let’s run a trial balloon and see what happens. Would love to see them at some historic tracks like Stafford Speedway, Thompson Speedway Motorsports Park, Wall Stadium, Hickory Speedway, South Boston Speedway, Five Flags Speedway or New Smyrna Speedway.

I’d like to see today’s wusses actually have to “race” against Lee Petty, Buck Baker, Curtis Turner, Jimmy Spencer, Richard and Bobby. How long would they last?

The Spotters Stand
Reply to  DoninAjax

They wouldn’t get taken out. Most of those guys raced fairly clean.

I know it wasn’t the focus of your comment, but I’d pay big money to see all the guys you mentioned(plus the Flocks) vs the Busch bros, Dale, Hamlin, Harvick, Smoke, etc.

DoninAjax
Reply to  The Spotters Stand

Not at all because I can’t wait till he turns Hamlin again.