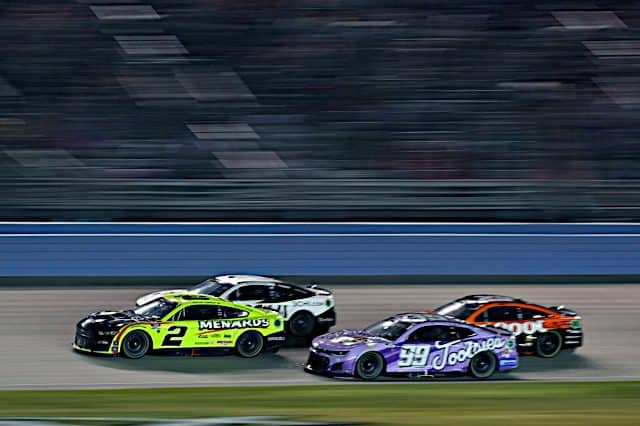 Following Sunday’s (July 24) NASCAR Cup Series event at Pocono Raceway, only five races remain in the regular season. It’s the time of year when both fans and competitors begin to turn their attention toward the playoffs. Some organizations, particularly Joe Gibbs Racing and Hendrick Motorsports, are closing out the regular season with race wins and solid momentum. It is beginning to look like the 2022 championship runs through those teams.

On the other hand, Team Penske has been trending in the wrong direction. The season started out with a bang for Penske when rookie Austin Cindric won the Daytona 500. Joey Logano had an up-and-down start to 2022, winning at the exhibition L.A. Clash at the Coliseum only to slump early on.

However, the No. 22 team seemed to have things figured out after scoring wins at Darlington Raceway and World Wide Technology Raceway at Gateway. And what Logano may have lacked in consistency, Ryan Blaney more than made up for. Blaney has been in the top five in overall points since the fifth race of the season, despite not having won a points-paying race. Penske’s good start to the season should have given them plenty of time to build momentum for the playoffs.

Instead, the problems are beginning to pile up. Victories by drivers like Christopher Bell, Tyler Reddick, and Daniel Suarez have pushed Blaney further and further down the playoff grid. Logano has struggled lately to run at the front of the field or even inside the top 10. Cindric meanwhile has shown significant improvement from the beginning of the year. However, a crash at Pocono just six laps into the race brought his streak of six races with a 13th-place finish or better to a screeching halt.

The next few weeks will be important for Penske to shore up its championship hopes. Blaney needs to win or at least protect himself from falling to the bubble before the regular season finale. Cindric could use a few more playoff points to guard against a first-round exit. Logano remains Penske’s top threat to win the title, given his past success in the elimination-style playoffs. But unless the No. 22 team can turn things around over the next month, Logano will not have a lot of momentum heading into the postseason.

The real question is, how important is momentum at the end of the regular season? Kyle Larson used the final weeks of the regular season last year to take the overall points lead. Chase Elliott scored a win and six top 10s in the last seven races of the 2020 regular season. Securing good finishes leading up to the playoffs was significant for both drivers’ title runs.

But there are also examples where a driver’s performance late in the regular season belied what was to come. In 2011, Tony Stewart famously quipped that his team didn’t deserve to be in the Chase as the regular season wound down. Stewart then proceeded to win five of the 10 Chase races and capture his third Cup championship.

In 2013, Jimmie Johnson struggled badly in the last four races of the regular season with finishes of 40th, 36th, 28th and 40th. Johnson ran so poorly that he blew an 80-point advantage over Carl Edwards in four races and lost the regular season championship. But once the Chase began, Johnson, as he did so many times, flipped the switch. He won two races and earned nine top 10s on his way to a sixth title. Edwards wound up struggling in the Chase and fell all the way to 13th in points.

Logano actually found himself in a similar situation last year to Johnson in 2013. In the four races leading up to the playoffs, Logano suffered four finishes outside the top 20. The No. 22 team fell from fifth to eighth in overall points, costing Logano a few playoff points in the process. Yet after the playoffs began, Logano finished worse than 11th only once. The one bad race, a 30th-place result at Texas Motor Speedway (engine failure) effectively blocked him from reaching the Championship 4.

Compare that to Blaney’s late-season efforts in 2021. In the last six races of the regular season, Blaney reeled off five top fives, including wins in the final two races. The No. 12 was suddenly the hottest team in NASCAR, making Blaney a trendy championship pick among a lot of fans. But in the end, his playoffs looked a lot like Logano’s. One bad finish in the third round, 37th after crashing at Kansas Speedway, was too much for Blaney to overcome.

So, what does all of this history mean for Team Penske in 2022? Logano mathematically clinched his playoff spot in Sunday’s race, but he remains mired in a serious slump. Just like last year, Logano has four straight finishes outside the top 20 and has fallen from fifth to eighth in overall points. Blaney still has a 106-point advantage over the playoff cutline, but the No. 12 team hasn’t looked any closer to winning a race than it did at the beginning of the year. Cindric is playoff bound, barring a catastrophe, but it remains to be seen if the rookie can bounce back from a disappointing race as the postseason draws closer.

Sometimes, momentum means nothing. Sometimes, it means everything. But generally speaking, the best drivers and teams know how to ride momentum when they have it and reverse course when they don’t. Penske is a strong organization with three good drivers. Chances are still high that all of them will make the playoffs while Logano and Blaney could easily make deep playoff runs. But with their competition getting stronger, week by week, the turnaround will have to happen soon. Otherwise, Penske might find itself shut out of the championship race for the second year in a row.

As long as nascar continues to operate under the chevrolet/hendrick umbrella, Fords don’t stand as chance – they should get out of nascar

Why has noone addressed the fact that mid and back pack Chevys are beating out Penske/SHR Fords on a regular basis, there is something wrong. The last 2 years, the Fords are just not competitive, and being a Ford fan, it makes for crappy races.

Ford/Mercury/Lincoln have always been low on the NA$CAR totem pole. When Dodge left they got to number three.

All Fords suck the past few years. Roger doesn’t seem to care. Gosh forbid he raises heck with NASCAR. Not Roger. Is he more interested in the other racing venues he participates in? And resigning Paul W. to the 22 car was just a mistake, the guy stinks. The driver deserves much better. Every week lemonade out of lemons.

No worries – hendricknascar will dangle a carrot out there for the Fords to chase, then we’ll have to listen to all the hendrickchevy commentary from the booth about how good the Fords are running, but come final 4 playoffs, the carrot will be removed by hendricknascar !