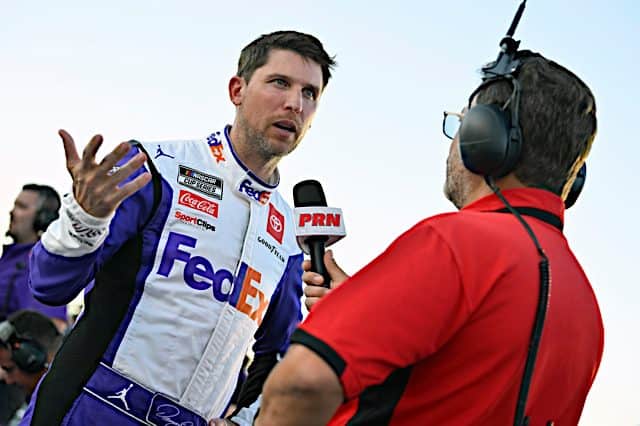 Well, then. As the NASCAR press corps wrote about Denny Hamlin leading 21 laps at Pocono Raceway en route to winning the M&Ms Fan Appreciation 400, officials were busy inspecting the No. 11. And due to a violation on front fascia aerodynamics, it failed hours after the race was completed Sunday (July 24). Hamlin was disqualified, as was second-place finisher and Joe Gibbs Racing teammate Kyle Busch for the same violation.

More than an hour after the checkered flag flew, Dawsonville, Georgia was in for a surprise when the siren at the pool hall blared for local hero Chase Elliott, who was declared the winner after originally finishing third.

Elliott inadvertently made NASCAR history in the process; he became the first modern era driver to win a NASCAR Cup Series race without leading a single lap.

He did finish second and seventh in the opening stages after the scoring was corrected for disqualifications. So it wasn’t that Elliott had a bad day… just a race nobody thought would be a winning one, let alone the driver himself.

And don’t forget Michael McDowell. He scored his eighth top-10 finish of 2022, a career high as Front Row Motorsports continues its steady improvement. The 2021 Daytona 500 winner is not contending for wins every week, though he’s certainly in the favorites conversation for Daytona International Speedway the end of August.

The key to McDowell’s success has been consistency. After a difficult start to 2022, he has only finished 20th or worse twice since a ninth-place run at Bristol. His average finish is 16.6, up four spots over last year and a whopping 12 over his 28.8 career average.

When there’s parity in the cars, some drivers will surprise, and McDowell is certainly one of those.

When Kurt Busch slammed the wall on Saturday during qualifying, it was a hard impact, but it didn’t look like it would sideline the driver. However, Busch was not cleared to race on Sunday with concussion symptoms.

There were serious questions raised when the NextGen car was undergoing safety tests. Some impacts reportedly didn’t pass some tests, though NASCAR was very tight-lipped about the actual test results.

But if the crash test numbers were equal to or better than the Gen-6 car, wouldn’t NASCAR be shouting that to the heavens?

Is this racecar as safe as its predecessor? It’s certainly much more fragile in some areas, but in others, it’s quite durable. In the past, the more durable a car is, the less it gives in an incident. Let’s hope Busch’s injury was a fluke and that we don’t see more of its nature going forward.

Defending Pocono doubleheader winners Alex Bowman and Kyle Busch both saw the race get away from them. In Bowman’s case, it was a mediocre day with an 11th-place finish, with two of those positions coming courtesy of post-race inspection.

For Busch, even before the DQ, it was already the one that got away. He dominated the middle of his sponsor’s race, winning the second stage and leading a race-high 63 laps. The disqualification added insult to injury; Busch finished runner-up before the car failed inspection, unable to make a move on Hamlin after the final restart.

Debuting Ty Gibbs did exactly what he should have on Sunday. He ran a smart race, didn’t push his equipment, and finished 18th after cracking the top 15 late. In his first Cup event, perhaps an audition for his full-time Cup career starting earlier, Gibbs didn’t need to make enemies or mistakes. He accomplished those goals.

For many years, NASCAR’s policy was that no matter what happened in inspection, the race winner stayed that way. Its philosophy was simple: fans shouldn’t leave the track without knowing who the real winner was. But times have changed, causing NASCAR to alter the rules a few years ago allowing disqualification for cars found outside of tolerances in post-race inspection. In the age of social media, fans would learn of the DQ instantly, not in the next day’s paper, so confusion was lessened.

And for the first time since the rule was adjusted, a Cup winner went home empty-handed. And so did the runner-up, his teammate, with the same violation.

But the Pocono DQs bring up an interesting disparity. NASCAR has said there are unlikely to be further fines or point deductions beyond what they’ve already given, part of a vague announcement Sunday night with limited details.

Wait a minute. Earlier this season, Brad Keselowski was hit with a 100-point deduction for a tail panel that hadn’t been repaired to NASCAR’s liking. He had the panel on the car because there were no new ones available and the team didn’t have another.

Hamlin and Busch each lose their race points, but Keselowski’s point fine is still higher, though he wasn’t disqualified after the Atlanta race. With both the Nos. 11 and 18 having the same violation, it’s hard to say it wasn’t done deliberately, if not to break the rules, then certainly to gain an advantage.

While NASCAR has made great strides in transparency and fairness in recent years, this one is a puzzle. We’ll see how the story develops as both disqualifications can and will likely be appealed.

It’s been hard for a lot of teams to build momentum in the NextGen cars. Having a rocket ship one week doesn’t always carry over to the next as previous notes just don’t matter with this car.

That makes the summer schedule a tough one. The last two weeks were at a pseudo-superspeedway oval in Atlanta Motor Speedway and the tight, flat mile of New Hampshire Motor Speedway. Follow that up with Pocono, which proved difficult to master. For what it’s worth, it’s always been hard to set up for, but this car took that up a notch.

That doesn’t exactly give teams much chance to get comfortable. And really, that’s what’s made this season so competitive. But it certainly makes proclaiming a title favorite as scientific as throwing a dart and hoping it sticks to something.

How… does Ty Gibbs’ debut affect the future of JGR?

Realistically, Gibbs should have one more year in the NASCAR Xfinity Series to gain experience, but he’s coming to the Cup Series eventually. That’s all but written in the stars.

The fact that he fared well, if not spectacularly, shouldn’t change the timeline. Gibbs has undeniable talent to go with his backing, and his presence in the wings could play a much bigger role in Silly Season than previously thought.

With Kyle Busch not signed, and hinting that he’s looking elsewhere, JGR has an ace in the hole in Gibbs. Short term, Busch is a Cup winner now. He’s a champion now.

But if JGR is playing the long game, Gibbs may just be the bigger commodity.

He’s a gamble in that he’s not a proven Cup driver. But at just 19, 18 years younger than Kyle Busch, Gibbs has longevity on his side. He’s going to be around long after Busch walks into the proverbial sunset.

Gibbs is unlikely to walk if he’s not moved up next year; Joe Gibbs is his grandfather and there will be a ride for him in the future. That means the team could sign Busch to a short-term deal if the driver would take it.

Signing Busch long-term is no longer the obvious priority it would have been even five years ago. And that could mean big changes ahead as NASCAR Silly Season heats up.

Amy, please find out if Truex and bubba’s car were checked for cheating too. Truex gained a lot of points on Blaney today, perhaps with an illegal car. It’s ridiculous nothing else is going to happen especially after they hit Brad so hard. Guess it’s because of reverand Joe.

I agree with everything that was said. All of the Toyotas should be checked out thoroughly for cheating. Especially since Bubba Wallace doesn’t normally run well then out of nowhere he starts finishing well. My opinion is that they have started this since New Hampshire. I think something wrong is going on forsure as evidence of the DQ’s. At least inspect them. I totally think they should get docked points as well.

As long as nascar continues to operate under the chevrolet/hendrick umbrella, Fords/Toyotas don’t stand a chance – they should get out of nascar.

Penske should go but there is little to choose between the treatment of Mr. H and Reverend Joe. NA$CAR seems to turn a blind eye to both of them.

Check ever Toyota! Betcha Hamlin and Busch were not the only ones. And Clyde becoming Cal Naughton, how embarrassing! What a sheet show for all involved.

Nothing to brag or speak about Clyde, ummm Cal. Not a single lap led. I don’t think “a win is a win” is an appropriate saying in this situation.

NA$CAR HAS to come out and say they checked ALL the Toyotas! Otherwise there will be a lot more innuendo about special treatment for certain teams. Like they say on L&O, perception is everything!