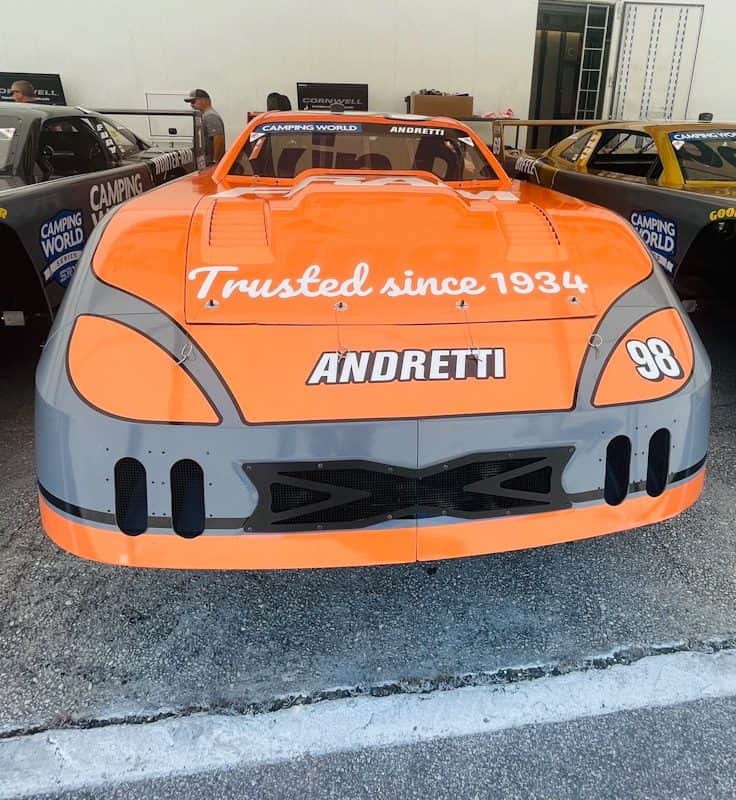 Last year, Elliott handedly won in his series debut at Nashville Fairgrounds Speedway. But in his second SRX showing on Saturday, he had to battle much harder to score the victory, overcoming two dirt aces in the process. CBS Sports’ Allen Bestwick summed it up best in the broadcast when he said Elliott has more dirt experience than you would think – and it showed.

Elliott outdueled Dave Blaney, who literally owns the this 3/8-mile track in eastern Ohio, to score the heat 2 win. Then, during the main event, he swapped slide jobs back-and-forth with Tony Stewart several times before eventually coming out with the victory.

Seeing such a battle between Elliott and Stewart for the top spot on a dirt track was extremely refreshing. Up to this point, every previous SRX dirt race had essentially been the Tony Stewart Invitational, Stewart going three-for-three with minimal opposition. I had begun questioning whether the series should even race on dirt after last week’s lackluster showing at Federated Auto Parts Raceway (I-55).

That said, Sharon squashed those thoughts with what was probably the most entertaining dirt race in the series’ young history. And Stewart wasn’t even Elliott’s biggest threat for the win until late in the going. Ryan Newman led early in the main event after making a ton of passes in the heat races to claim the pole position. Rocket Man looked like he had something for the No. 9 machine, but that all ended courtesy of an Andretti divebomb gone wrong.

Entering the race, Andretti led Newman in the championship battle by just eight points, and Newman cut that lead down to four through two heats. Both drivers ran well in the main event and Andretti lined up in third, behind Newman, on a lap 32 restart. It looked like the two were set to duel for the title amongst themselves.

That’s when Andretti dove under Newman to make it three-wide, only there was no room underneath the No. 39. The No. 98 then slid up into Newman, spinning him out, but Andretti damaged his own vehicle in the process. Both cars went to the rear and neither made their way back into contention for the race win.

Thanks @tsrsmoke for the opportunity to run with you guys. I drove @RyanJNewman way too hard to try to get it done. My apologies to him for the way it went down but happy with the end result. Fun 6 races with this bunch. 🍾🏁🏆 pic.twitter.com/K6U7v782Cc

When the checkers flew, Newman finished eighth, one spot ahead of Andretti, leaving him two points shy of the championship.

But wait, it gets wilder.

At some point after the season opener at Five Flags Speedway, Andretti was awarded three extra points without any statement. Had Andretti not received those points, Newman would be the champion.

SRX CEO Don Hawk and The Athletic’s Jeff Gluck offered an explanation as to why.

Accurate. Per @SRXracing rulebook, we fixed upon review of week 1. It was covered publicly in drivers meeting @ next race. I said “ @MarcoAndretti was made right on that, let’s move on.” Thanks @RogerSlack @nascarman_rr @TonyStewart & @jeff_gluck whom I spoke with today.

“[Andretti] had wrongly lost his position in the first week and they gave him points to make up for it afterward (was told it was discussed in Race 2 drivers meeting),” Gluck tweeted. “So he’s the rightful champ.”

“Accurate. Per [SRX] rulebook, we fixed upon review of week 1,” Hawk tweeted in reply. “It was covered publicly in drivers meeting @ next race. I said [Andretti] was made right on that, let’s move on.'”

So even though there was confusion over why Andretti received those extra points, ultimately impacting the championship, the right champion was crowned on Saturday.

And while it would be rare for other racing series to award points to right an incorrect officiating call, it is true to the spirit of SRX, which is all about fairness and keeping a level playing field. Look no further than last week when countless caution laps were run just to give the crew a chance to try to repair Hailie Deegan‘s car.

Outside of the questionable divebomb on Newman, Andretti was a deserving champion (He should’ve already been crowned the champ for getting Alfonso Ribeiro, a.k.a. Carlton, to come to South Boston Speedway). Though he went winless this season (Andretti did win at Slinger Speedway last year), he was consistently a threat. Coming into the season finale, the driver of the No. 98 had rallied off three second-place main event finishes in a row.

The former IndyCar star has been so strong in the SRX cars that it has many, including himself, saying that he should give NASCAR a try, mainly the NASCAR Xfinity Series.

But perhaps Andretti’s most impressive driving display of the season came in the final laps at Sharon. Following the Newman incident, Andretti was collected in a another wreck when Blaney spun Ryan Hunter-Reay.

In this wreck, Andretti got his hand caught in the steering wheel, breaking his wrist. So Andretti drove the final nine laps and raced his way to a championship with a broken wrist. That’s a whole new level of toughness.

Sub ideal. Saw stars the last few laps up on the cushion. pic.twitter.com/SgXcyxw6hi

The lone disappointment from Sharon was the much-anticipated Battle of the Blaneys, with Dave Blaney racing against son Ryan. The younger Blaney got caught up in Paul Tracy’s lap 3 spin during the first heat, igniting a crash that involved half the field. Matt Kenseth was among those collected in the incident; both he and Ryan Blaney had to sit out the rest of that heat and all of the second one while the SRX crew tried to fix his busted radiator.

Both were able to start the main feature and Kenseth ended the night on the final step of the podium. But Ryan Blaney’s car still had a ton of nose damage, keeping him from contention en route to a seventh-place finish. Ryan did get a big bump from his father at one point in the night, so the Blaney family will at least have that story to take away from it.

Still, having the Blaneys and Elliott in the race gave it a boost in star power, something that hadn’t really been as prevalent in the SRX series this season outside of the regulars. Add in NASCAR Cup Series champion Joey Logano spotlighting in the booth with Bestwick and it made the night feel much more important, some level of celebrity status.

Sharon provided a fun race with the perfect amount of carnage (not too much, like last week) to send the season out on a high note. Plus, it was an added bonus to actually have a championship battle this year after Stewart ran away with it last season.

Will there be a season three of SRX? It’s too early to tell. The first five races of this year all had around a million viewers, and it finished fourth of the big four networks in ratings all but once. That said, there were quite a few sellouts this year, and there is obviously an audience for this series going forward.

There are two things which will ultimately decide the legacy of SRX season two: whether Andretti gets an Xfinity opportunity and whether Helio Castroneves lands a Daytona 500 ride. If those both come to pass, it shows the impact this series is having across the motorsports landscape. That’s got to count for something as SRX enters the offseason pondering how to make a bigger impact come 2023.

Thank you for addressing the scoring/points issues. Its still not clear what they were making right. Did Marco finish in X position and get the wrong points awarded? Or did they score him in 1 position when he actually finished in another?