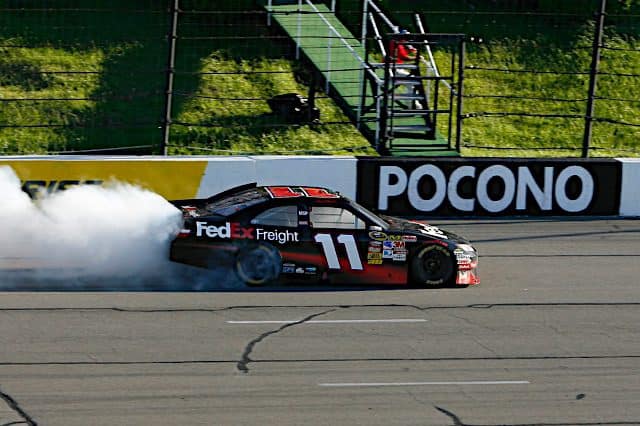 Remember that bizarre NASCAR doubleheader — er, quadruple-header — at Pocono Raceway way back in 2020?

After COVID-19 shut everything down in March of that year, NASCAR finally returned in May and a little over a month later came a four-race weekend at Pennsylvania’s Tricky Triangle.

The NASCAR Cup Series’ doubleheader began with a Saturday race with a typical 3:30 p.m. ET green flag, but Sunday kicked off with a 9:30 a.m. NASCAR Camping World Truck Series green flag, the NASCAR Xfinity Series rolling off a few hours later and Cup that afternoon. Both Cup races ran their full distances, despite the Sunday event featuring an early delay for lightning in the area.

Kevin Harvick and Denny Hamlin emerged the winners of the first and second premier series events, respectively, and continued a trend of constant and, to be frank, fascinatingly cyclical contenders at the three-turn oddity.

With the sole 2022 Cup event at Pocono ahead of us this weekend on Sunday, July 24, plus the Xfinity and Truck series (the latter the regular-season finale for its division), it’s a stacked weekend for NASCAR all the way around, and look for the usual suspects to be out front this weekend.

There’s an odd, cyclical nature to some of these drivers’ Pocono wins. After Bobby Labonte swept in 1999, things got a little all over the place: Jeremy Mayfield, Rusty Wallace, Ricky Rudd, Labonte, Dale Jarrett, Bill Elliott, Tony Stewart and Ryan Newman made up the next four years’ worth of winners.

Jimmie Johnson swept in 2004 and didn’t win again at Pocono until nearly 10 years later in 2013, while eventual Hendrick Motorsports teammate Dale Earnhardt Jr. had some solid runs and near-wins at the track in the first 14 years of his Cup career; it took a while, but Earnhardt made it to victory lane there in 2014, sweeping the season.

See also
Holding a Pretty Wheel: With a Regular NASCAR Season Like This, Who Needs Playoffs?

Kurt Busch won in 2005 and 2007 but didn’t win again until 2016. Hamlin, despite his six wins there, didn’t win for a few years after his sweep, and then after his 2010 triumph it took a decade before the No. 11 rolled into victory lane again at Pocono.

After his 2003 victory, it took Stewart until 2009 for his second and only other triangular triumph, while Carl Edwards’ 2005 win was a precursor to a second for the then-No. 99 driver … but more than three years later. Jeff Gordon had three wins, but the gap between the first and second stretched for four seasons. Eventual HMS stablemate Kasey Kahne had to wait five years between wins.

The prime Pocono standout is Hamlin, who started on pole and won the damn thing BOTH race weekends in his 2006 rookie season, when he eventually finished third in the final standings.

Hamlin’s enjoyed six total wins in Long Pond, including the 2006 season sweep and back-to-back wins in the second 2009 race and first 2010 event. Most recent was that 2020 triumph, and the No. 11 has averaged a finish just south of 11th across 32 starts. A grand total of 21 starts there have resulted in top-10 efforts for the Chesterfield, Va., native.

His Joe Gibbs Racing teammate Kyle Busch is the defending winner at the track and has just one win so far this season. There might be some added pressure after last week, considering stablemate Christopher Bell just won his first race of the season, to get a second for the No. 18.

Busch has four wins to his name at the triangular circuit. Though a bit less successful than Hamlin in his 34 starts — Busch has eight finishes there of 30th or worse — he did score the victory last year in a nail-biter of a race, when Busch overcame transmission issues and won on fuel mileage. Most of his solid runs have only come in recent years, when he won one of the Pocono races in three consecutive seasons from 2017-19.

Across the JGR paddock, teammate Martin Truex Jr. is still searching for his first win of the season. In a year when 14 different drivers have already won, it’s pretty surprising that the No. 19 hasn’t visited victory lane yet. Pocono’s a place to do it, though: after leading a season-high 172 laps last week at New Hampshire Motor Speedway, Truex is headed to a place he’s won at twice.

Though never super dominant in either triumph, Truex was out front for nearly 100 circuits in 2015, when he scored his first win for Furniture Row Racing. The sequel came in 2018, when FRR and Truex went to victory lane for a second time at Pocono. Since joining JGR, nothing’s really panned out for Truex at the track, but if the No. 19 team can use last week as a springboard, that Toyota crew will be dangerous come Sunday.

Neither Harvick nor Truex won at the track in their careers until within the last several years. Using rough, unproven math that’s essentially pure estimation, it seems like the gaps between Pocono wins for still-active drivers averages around four, maybe five years.

Using those logistics, I’ll be keeping an eye on Truex and 2017 winner Ryan Blaney in particular. Honorable mentions go to Kurt Busch and Chris Buescher, whose durations since their last Pocono wins are right around that mark as well.

Neither Truex nor Blaney have yet to score points-paying wins in 2022. Both have shown speed and both have run into circumstances that prevent them from scoring wins; it’s been four years since Truex won there and five since Blaney. High time for the No. 19 or the No. 12 to visit the winner’s circle in Long Pond.

Don’t forget to take a drink every time “Tricky Triangle” is mentioned during the telecast!