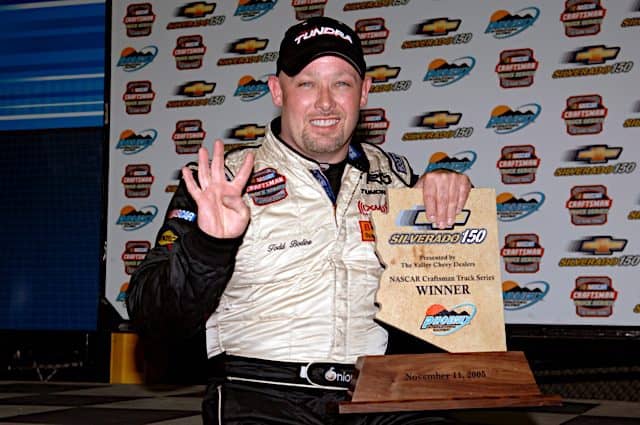 This weekend, Todd Bodine will attempt to make his sixth and final NASCAR Camping World Truck Series start for the season at Pocono Raceway. It will also be his 800th career NASCAR start.

The quest for 800 began late last season when Marcus Lemonis issued a Twitter challenge. The task? Fans needed to present 800 reasons why the Camping World CEO should sponsor Bodine for six races in 2022 to help him get to that milestone.

The fans sure answered with “over 17,000” reasons according to Todd’s wife, Janet Bodine.

Congratulations to @Team_Onion … we set the goal and you achieved it. No shortcuts, no excuses just execution. This is why you are a winner. Excited to be part of history with you. @NASCAR_Trucks https://t.co/Ks4wfAKOn9

With sponsorship secured, Bodine still needed a team to race for. That’s where Halmar Friesen Racing came in, providing a truck for what the two-time Truck Series champion has referred to as his “retirement tour.

“When athletes, drivers particularly, usually when they come to the end of their career it just stops because you didn’t get a ride or something like that and there’s no fanfare, there’s no sendoff,” Bodine told Frontstretch at Texas Motor Speedway earlier this season. “You see these guys doing retirement tours and that’s great that they have that opportunity. Well, I never got that.

“In the middle of ’13 we just quit racing and for us, this is like a retirement tour, a sendoff, a thank you to the fans and everybody involved and when we’re done, we’re done.”

After being away from the Truck Series since 2013, Bodine returned at Las Vegas Motor Speedway earlier this season. The driver of the No. 62 Chevrolet ended up bringing out two cautions en route to a 21st-place finish. Five races later, Bodine was back behind the wheel at Darlington Raceway, this time posting a 10th-place finish (despite an early spin) that put a near-permanent smile on his face.

Since then, Bodine has posted results of 13th at Texas Motor Speedway, 20th at Sonoma Raceway and 27th at Nashville Superspeedway ahead of this weekend’s final start at Pocono.

While this year’s six starts helped him get to 800, Bodine’s NASCAR career has spanned the NASCAR Cup, Xfinity and Truck series over the last 37 years.

The 48-year-old from Chemung, New York, made his NASCAR debut in a 1986 Xfinity race at Martinsville Speedway. But engine problems forced him to retire after just 31 laps for a 27th-place finish, right where he started. All told, Bodine has 333 Xfinity starts, including 15 wins, 90 top fives and 160 top 10s. His best points finish in the series was second in 1997 when he ended the year runner-up to Randy LaJoie.

Meanwhile, Bodine’s 19-year career in the Cup Series included 241 starts, seven top fives and 21 top 10s. The closest he came to running the full schedule included 2001 when he didn’t qualify for Daytona International Speedway and 2003 when he didn’t qualify at Talladega Superspeedway. He finished 29th and 31st, respectively, in those two seasons.

Bodine made his Truck Series debut during the inaugural 1995 season at Heartland Park Topeka, a 1.8-mile road course in Topeka, Kansas. Piloting the No. 61 Roush Performance Products Ford, Bodine qualified third and finished fourth behind race winner Ron Hornaday, Jr. Joe Ruttman and Terry Labonte. Though he only ran five races that season, his worst finish came when he finished eighth at Mesa Marin Raceway in Bakersfield, California.

It wasn’t until 2004 when Bodine was once again running in the Truck Series. This time, piloting the No. 67 Fiddleback Racing Ford and the No. 59 HT Motorsports Dodge for one race apiece at Charlotte Motor Speedway and Kansas Speedway, respectively, he failed to finish inside the top 10 in either event.

Fast forward to Richmond Raceway in September 2004 when Bodine joined the newly-formed Germain Racing where he finished fourth in their debut. Just three races later, the team scored its first victory at Auto Club Speedway and followed it up with another win at Texas, a track where Bodine boasts six trips to victory lane. With just 10 starts during the 2004 season, Bodine posted a 13th-place average finish, one that improves slightly to 12th if you consider his starts with Germain only.

The 2005 season marked the beginning of Bodine’s full-time career in the series. Having won five races, including four in the last six events of the year, Bodine finished third in the standings despite six DNFs. He posted 15 top 10s, 12 of which came in the form of top-five runs.

Just one year later, Bodine bested his top 10 count by one and scored his first championship with three wins and an average finish of eighth. From 2007 through 2009, Bodine finished no worse than fourth in points and racked up an impressive seven wins, 36 top fives and 46 top-10 finishes.

When 2010 rolled around, no one expected Germain Racing to make it through the entire season due to the lack of sponsorship that plagued the team. A generous promise by owner Bob Germain ensured that Bodine would remain on track regardless of whether the organization managed to sell individual races. As it turned out, that decision was likely the best they’d ever made. With four trips to victory lane, coupled with 17 top fives and 20 top-10 finishes in 25 races, Bodine had arguably his best season with an average finish of 6.4 and just one DNF before grabbing his second championship.

“You have to understand, racing is all we’ve ever done,” Bodine told ESPN at the time of that championship. “We grew up going to that little racetrack every Saturday night. For us to finally reach the pinnacle of what we’ve wanted all our lives was just beyond words.”

Sadly, sponsorship woes continued to plague the team throughout the 2010 season, which then carried over into 2011. After 10 races, the Germain family found themselves unable to continue to field the No. 30 Toyota and ultimately chose to instead focus on their now-defunct Cup team.

However, it wasn’t the end of the road for Bodine, who thanks to a partnership with Randy Moss Motorsports, ended up behind the wheel of the No. 5 Toyota to finish out the year. The 2011 season marked the first year since 1995 that Bodine did not visit victory lane at least once; he ended the year sixth in the standings, his worst in seven full-time seasons, with just 11 top-10 finishes in 25 starts.

Enter Red Horse Racing. Having built a friendship with RHR team owner Tom DeLoach, Bodine quickly sought him out in the garage when he knew there wasn’t a future for him at Germain Racing, and the two agreed to work together.

“When I found out last year that Germain Racing was not going to run trucks this year, the first thing I did was march down two trailers to talk to Tom (DeLoach),” Bodine told Frontstretch when asked about how the deal with RHR came about. “Tom and myself had talked about doing this for a number of years, and if we ever got the chance and the opportunity we’d love to do it. There was the chance and the opportunity and I was ready to go.”

Despite the change in teams, sponsorship continued to be an issue. And after running the full 2012 schedule, Bodine ended up the odd man out as RHR moved forward without him behind the wheel.

Enter ThorSport Racing. Bodine signed on for a single race deal at Daytona to run with the organization. Available sponsorship allowed him to compete for eight races with the organization that season. He posted a best finish of 11th three times (Daytona, Martinsville and Texas) but wasn’t able to run the season to completion. That was the last time Bodine raced in the Truck Series until his return this season.

Now that Bodine will make his 800th start this weekend, the origin of the whole deal with Lemonis, the two-time Truck Series champion didn’t completely dismiss the possibility of returning to racing full-time, those he did admit it would take some work.

“I’ve been asked that question a lot lately,” Bodine said earlier this season. “If we had full sponsorship and it was the right deal, I would consider it. But it’s going to take a lot. I’ve gotta get in shape, not just physically but mentally and there’s mental exercises you can do for it.

“It would take a lot, it really would. But right now I’ve got a great job at FOX and it’d be hard to give that up.”

Geoff was the only really competitive Bodine.

800 starts is an amazing feat considering everything he had to go through almost year after year. I didn’t realize he was only 46. The consideration he has about going racing again tells you how much he loves to race. I’m happy for him.

The article is wrong. he’s actually 58