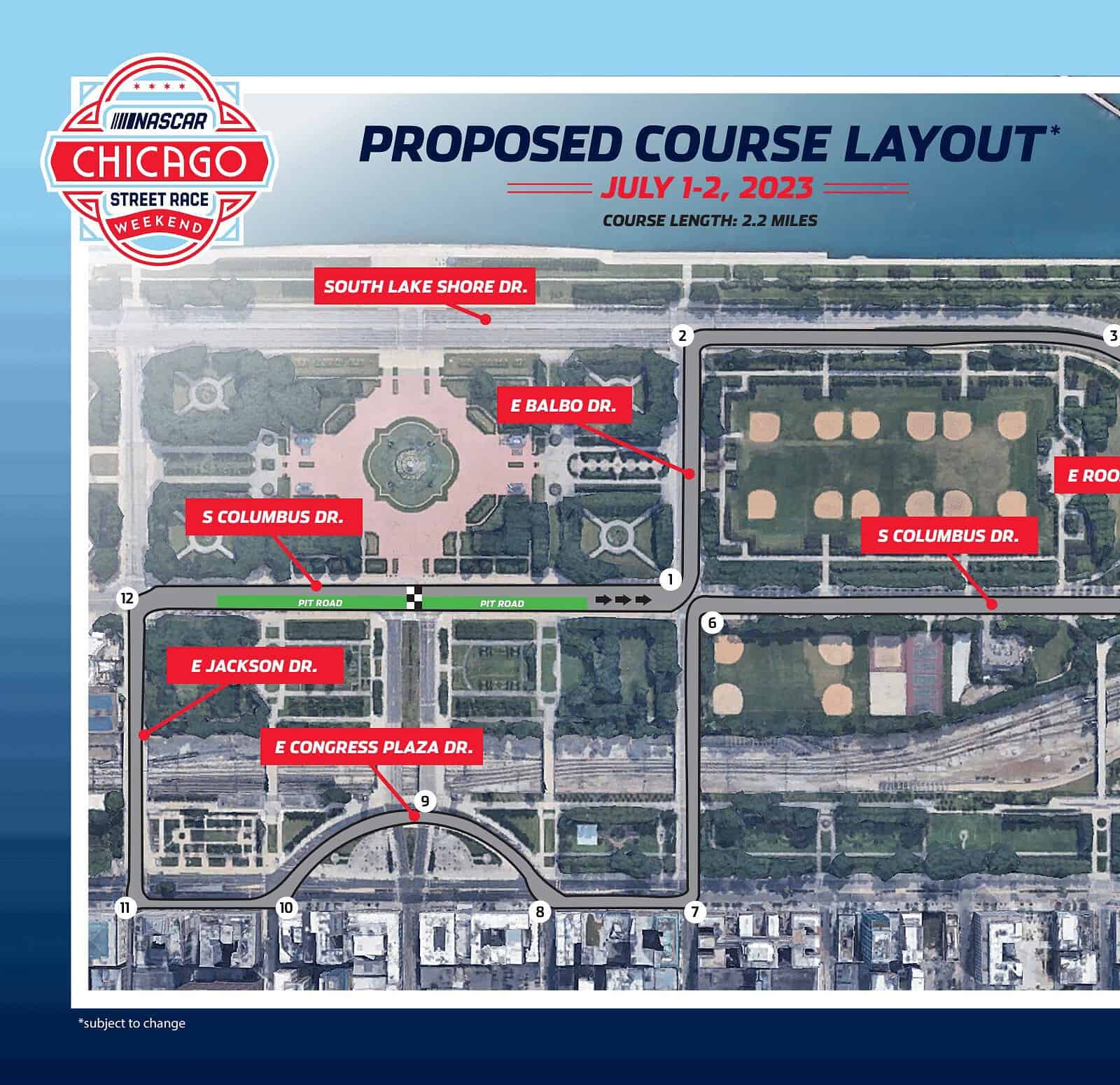 NASCAR is coming back to Chicago — and this time, it’s going street racing.

The NASCAR Cup Series will compete on a street circuit in downtown Chicago in 2023, NASCAR announced July 19.

The series’ 2023 weekend will occur July 1-2, and IMSA will join the series at the course.

Cup will run the course on July 2, while IMSA will compete on July 1.

“Like the Busch Light Clash at the Coliseum, we seized an incredible opportunity to add an unprecedented element to our schedule and take center stage in the heart of another major metropolitan market,” Ben Kennedy, NASCAR senior vice president of racing development and strategy, said in a release. “This is the ideal setting for the first-ever NASCAR Cup Series street race. The NASCAR Cup Series Next Gen cars and the IMSA machines will race along the shores of Lake Michigan in downtown Chicago, marking a truly historic moment for our sport. We are very appreciative of Mayor Lori Lightfoot and her team, along with the entire City of Chicago for working with us to make this concept a reality.”

The course is planned as a 12-turn, 2.2-mile course. According to the release, Columbus Drive, Lake Shore Drive and Michigan Avenue are among the streets on which the course will be situated.

Here's a graphic of the proposed track layout for #NASCAR's Chicago street course.

With the move to Chicago, NASCAR will not return to Road America in the Cup Series in 2023, according to Kennedy.

See also
NASCAR Mailbox: What Does NASCAR Have to Gain From a Street Race in Chicago?

The news comes after The Athletic reported earlier this month that city officials had endorsed a bid for the race.

According to Kennedy, the move to Chicago is a three-year deal.

“Chicago’s streets are as iconic as our skyline and our reputation as a world class sports city is indisputable,” Chicago Mayor Lori Lightfoot added. “I am thrilled to welcome our partners at NASCAR to Chicago for an event that will attract thousands of people to our city. Chicago’s world class entertainment and hospitality industries, coupled with our city’s history as a conduit for sports talent, make us the perfect hosts for this unique event.”

The Cup Series held a pair of races at Road America in the last two years. Chase Elliott won the 2021 edition, while Tyler Reddick nabbed his first series win at the track earlier this month.

Previously, NASCAR visited the Chicago area with years of events at Chicagoland Speedway in Joliet, Ill. NASCAR’s three national series and the ARCA Menards Series last competed at the track in 2019.

looks like a wreck to pass figure 8 demo derby with 90 degree corners to me.

I can hear the announcers now telling us how great the race…..as they show the 2 lead cars.

They might be the only two that finish the “show.”

That would be a 100% increase in the number of cars they usually show.

Really putting on a race in a City. If one of the highest crime and murder rate.

REALLY LOOOOONG straights and 90 degree corners. Going to be hard to stay awake for that one. And it is replacing Road America? Yawn.

The potholes in Chicago will take out half the field by the third lap.

Bill B
Reply to  Glen H

If the random shooters don’t.

Your doing great Brian, Ben is now your clone.

The proof is in the decisions the brain trust are making! They have Brian written all over them.

Yep, you have called it right since the beginning. A complete clown is in charge. A Chicago street race, I still think it has to be a joke.

Not a fan of this idea. Trading Road America for this is definitely not good in my opinion. Watching Cup cars on a street course doesn’t sound like much fun to me at all. I’m not really a fan of street courses for any series but especially not for this one. Pass.

I see these novelty races — like Bristol dirt, LA Colliseum, and now Chicago’s sraights and 90s — as desperation moves.
It’s axomatic that a new race venue will get a good crowd for the first year or two and then, if the gimmick does not produce good racing or soemhow appeal to the local audience, the attendance falls off. Look at the history of so many race venues where this happened.
Do you remember NJ Meadowlands? That was supposed to tap the ‘huge’ NYC market. It’s long gone. Ot look at the life cycle of the so-called Chicagoland oval.
This Chigago street course offers nothing for a true race fan. I predict that this experiment will be short lived.
The scary part is the suspicion that NASCAR is ‘swinging for the fences with the novelty acts becasue they fear that the TV networks will abandon them when it comes time for contract renewal.

The winner puts on a bullet-proof vest before he gets out of his car and gets a new specially-designed for the example of Brian’s product AK68s fully loaded that he can fire into the air standing on his car.

“The winner puts on a bullet-proof vest before he gets out of his car and gets a new specially-designed for the example of Brian’s product AK68s fully loaded that he can fire into the crowd standing on his car.”

Fixed it for you. After all, it IS Chicago we’re talking about. lol

The bullets have to hit something somewhere.

Will bullet proof vest be mandatory ?

Maybe 70% under caution? What if it rains? Worse than COTA?

I was born in the city and raised in the suburbs. I even saw my 1st race at Soldier Field before it was reconfigured for the Bears. This whole idea is ludicrous. Getting to the lakefront for a major event on a holiday weekend is not the easiest thing. They will suggest using Metra to get into town from the burbs and the CTA to get to the lakefront but that means you just bring yourself and not anything you would normally take to a race. I live about 35 miles west in the burbs and a normal trip to the lakefront is close to an hour and a half. I would figure closer to 2 hours for this event. Then there is the parking issue. There are underground garages at Grant Park but access will be difficult at best with the street closures and the prices to park may rival the ticket prices. Don’t plan on any serious tailgating in the parking garages. They won’t let you fire up your grill indoors. Any tailgating will probably be restricted to the outdoor parking at Soldier Field which means you’ll be in for a bit of a hike to see the race. To actually watch the race grandstands will be needed. The barrier walls around street circuits don’t promote good viewing from ground level. What you bring in to those stands may be highly restricted. Lollapallooza music fest is coming up at Grant Park and to get inside the fence on Park District property means going through gates that check for banned items. Those restrictions include no backpacks, no coolers, no outside food or drink, especially alcohol, no professional cameras (anything with a changeable lens), no recording equipment or electronics (scanners?), no carts wagons bikes and many other items. Not sure if some of this would be relaxed for NA$CAR. Also don’t plan on parking your camper on the backstretch for the weekend. Not sure where they would put those. If you want to spend the night you’d better find something outside of the downtown area. The downtown hotels are far from discount. The race itself does not look promising. The course is basically what iRace designed and tried during the pandemic. That race was a joke. I don’t see any improvement by using real cars. Most locals could probably design a better course by moving some of the route a few blocks south and using parts of the museum campus area. Losing Road America for this is a travesty. If they wanted to scrap a road course they should have scrapped COTA.

They don’t want people from the ‘burbs to attend – in case you can’t read between the lines as to the target consumer for this “event”.