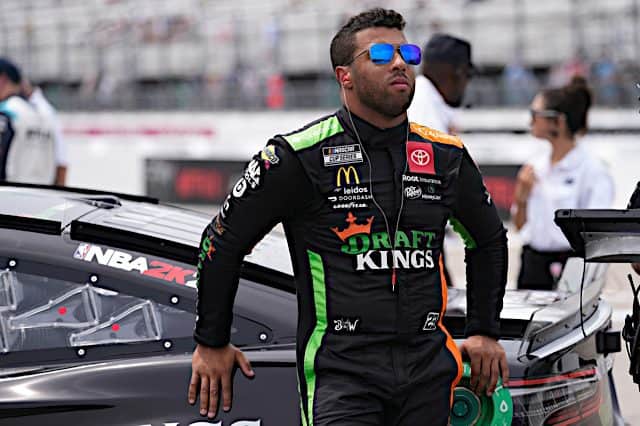 Darkness denied him a chance to race for the win a year ago, but this time, there was plenty of daylight despite a brief pre-race shower. Christopher Bell passed Chase Elliott with 42 laps to go in the Ambetter 301 at New Hampshire Motor Speedway and, from there, easily controlled his own destiny.

At one point, Bell told crew chief Adam Stevens that he had the race under control and didn’t need the lap counts the team was feeding him through the radio. The No. 20 crew complied, and Bell took it from there, cruising to his first win of 2022.

Bell didn’t have a great car early on, but his team made improvements throughout the day and their driver found himself able to close and pass in traffic when it counted. It was a very good race for the Joe Gibbs Racing and Toyota camps with five Camrys in the top 10: three of them from the JGR stable and two more from 23XI Racing.

And don’t forget Bubba Wallace. Entering the weekend, Wallace’s NASCAR Cup Series efforts at New Hampshire produced less than stellar results, earning an average finish of 23.8. This time around, Wallace took the bull by the horns and dropped his Cup Series-best qualifying effort to date, starting fourth. He stayed inside the top 10 all race long, finishing second and 10th in the first two stages before coming home a strong third.

Don’t look now, but Silly Season is here. It started off slowly a few weeks ago with Martin Truex, Jr. announcing that he’ll return to the No. 19 next year, but it really ramped up this week. Tyler Reddick, on the heels of his first career win at Road America, announced that he’ll join 23XI Racing in 2024, leaving Richard Childress Racing after a NASCAR Xfinity Series title and at least one Cup win. Whether that puts Reddick’s seat in jeopardy for 2023 is still a question mark.

A day later, Petty GMS Motorsports announced the team will part ways with Ty Dillon after this year, which fueled even more speculation: will Dillon take over his grandfather’s No. 8 as early as next year? That seems unlikely, as RCR has had opportunities to add the younger Dillon to the stable before and hasn’t. It’s possible Petty GMS is considering an alliance change for 2023 which means it doesn’t need to run Dillon to benefit from RCR.

Still up in the air: The No. 10. Aric Almirola said in a weekend press conference that he’s considered staying in the car another year but has not made a concrete decision to reconsider retirement. Kyle Busch and Bell, meanwhile, have not announced extensions but are likely to stay put. Silly Season might be almost over… or another sudden storm could be brewing.

Polesitter Truex won stage one. Then he won stage two. And then, he got mired in traffic, a position he hadn’t really been in during the day. His car didn’t handle as well as it did out front, and he was unable to charge back to the top, stalling out in fourth. Despite having the most stage wins in 2022, Truex has yet to close the book on a race.

Point leader Elliott had a rocket ship of a car and found a line low on the track that suited him perfectly. He worked his way toward the front and found the lead late in the day. Elliott paced the field for 13 laps before Bell found his own rocket of a line and got by. Elliott still finished second, a career best at the Magic Mile.

Defending race winner Almirola came back to NHMS with a fast car and some added confidence. He qualified seventh and ran inside the top 10 early, only to fall victim to a broken gear shift. His team repaired it and sent the No. 10 back out, but Almirola finished 31st, 19 laps off the pace.

Active New Hampshire win leader Kevin Harvick had a chance to become the all-time win leader by breaking a tie with Jeff Burton; for a while, it looked like he might make good on that. Harvick qualified 10th and, by the end of stage two, was running second and gaining on Truex. Unfortunately for Harvick, the stage ran out of laps. Varying pit strategies left him deeper inside the top 10 for the final stage, and he made his way back to battle Wallace before settling for fifth.

New Hampshire was a test for the Next Gen car. The car has been at its best on intermediate tracks, but the show at the shorter flat tracks has been a weak point. Early in the race, the field was strung out mostly single file and it looked like another poor report card for the Next Gen. The race improved, though and the second half saw plenty of good battles throughout the field. Bell was able to catch and pass Elliott’s strong car, and there were plenty of passes to be had, some involving side-by-side racing for multiple laps.

Tempers flared a couple of times. Denny Hamlin rubbed the No. 1 of Ross Chastain at one point, and Austin Dillon touched off a feud with Brad Keselowski after Keselowski inadvertently bumped him while racing. Dillon turned into Keselowski as the field came to a caution flag for Kyle Busch and Keselowski immediately returned the favor after Dillon’s move cut a tire on his No. 6. Keselowski rebounded to finish a badly-needed seventh.

The regular season continues to wind down with a trip to Pocono Raceway this coming weekend. Pocono is its own animal of a track, notoriously hard to set up for because of the completely different nature of all three turns.

It’s also a track that could see a driver in need of a boost add himself to the win column. Ryan Blaney, Chris Buescher, Harvick and Keselowski have wins at the Tricky Triangle and need one to take a playoff spot as chances dwindle. Want a dark horse? Erik Jones is excellent at the track as well and his No. 43 team has shown flashes of brilliance this year. There are plenty of opportunities to be had for a great finish.

How… tight is this playoff race getting?

A year ago, Almirola’s New Hampshire win set up a similar question that was still a long shot at that point. Suddenly, the odds aren’t nearly as long this time. Bell is the 14th different winner of the year with six races remaining in the regular season. That wouldn’t necessarily be cause for concern, but the drivers who have not won this year include Truex, Harvick and Blaney. Plus, Buescher has been a threat on road courses (there are a pair left) and anyone could dodge the mayhem and sneak in at Daytona International Speedway.

In other words, it’s tight. Truex is currently on the cutline. If there’s another winner who’s not him or Blaney, he’s out without a victory. Harvick’s already on the outside looking in without that top finish.

And if we see three more winners, a possibility given the schedule? Someone with a win is out. It’s as tight as it’s ever been.

New Hampshire reminds me a lot like the Milwaukee Mile.

There was plenty of passing, but it was back in the pack.

With Bell’s win, & Bubba’s 3rd place, so far the crew change is looking good. Hamlin was the one bitten by pit stop woes.
The Dinger was another one, he’d come in running 16 or 17th. And come out 21or 22 every stop. He passed a lot of cars, with little to show for it.

Brad & RFK had a good day despite Dillon.

Burton didn’t have much to say about Dillon, but he sure had way more than enough to say about Chastain, despite way less provocation. He seems to have appointed himself Executive VP of the Chastain haters club.

Anyone else notice that Hamlin moved at least 2 cars, one being Chastain, to make passes, but no one said word one about it.

Chastain has become, (not W/O reason) the chicken with the bleeding comb that all the other chickens, & Burton love to peck. He just needs to keep his head down, learn to lift when the situation calls for it, & he’ll get through this.

My biggest disappointment was McDowell qualifying so well & running so badly.

my disappointment was truex. that last pit stop did it.

If Elliott, or Harvick had won, then Martin would have been my biggest disappointment also. Bell, kind of took the edge off of Martin’s not winning for me, but I was rooting for him all the way until he pulled up lame, & It was clear it was over for him.

Burton’s constant criticism of Chastain is just uncalled for. Meanwhile Hamlin and Elliott both push others up the track and not a word’s said.