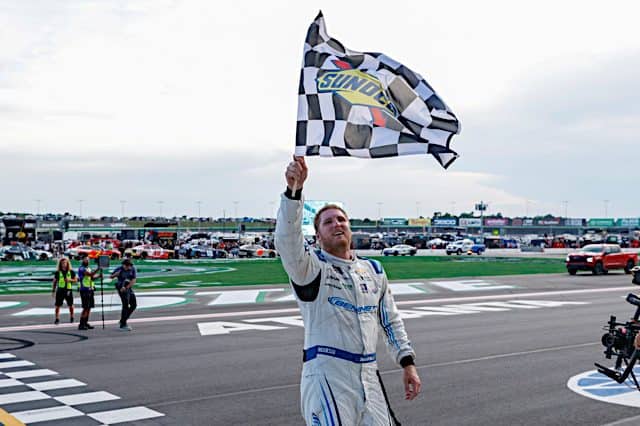 Five Georgia natives competed in the Alsco Uniforms 250 at Atlanta Motor Speedway on July 9. That’s approximately 13% of the Xfinity field, and none of them had previously won at their home track.

Until today, that is, when rookie Austin Hill claimed his second career Xfinity Series victory at his home track. Hill, a native of nearby Winston, Georgia, also won the season opener at Daytona International Speedway, another superspeedway track.

The race was relatively calm, but there were still some storylines to follow.

Kaulig Racing showed up – something that hasn’t been said in a while. Sure, AJ Allmendinger has two wins this year and is currently leading the regular-season championship standings, but I’m talking more about his two teammates, Hemric and Landon Cassill. Cassill ended up eighth on the day, just three spots behind the defending champion. In fact, Kaulig showed so much promise today that Allmendinger was the worst-finishing car, in tenth. All three cars finally had a good day, and with Cassill and Hemric riding near or on the cutline for the playoffs, both of them needed this race to go their way after both have had borderline abysmal races the past few weeks.

Reddick’s fourth-place finish gave Big Machine Racing another fantastic finish after a subpar 22nd-place qualifying effort. Scott Borchetta’s sudden “benching” of Jade Buford has proved to be the kick in the pants this team has needed, and it’s gotten the team a win and a top five out of it (and could have been more if it weren’t for incidents out of their control). The alliance with Richard Childress Racing certainly has helped the team improve from last year, but it’s no secret that the team has gained some confidence with the recent runs Reddick has provided for the team.

Ty Gibbs’ pole run was all for naught, as he ended up retiring from the race after contact with the other Monster Energy-sponsored car, Riley Herbst, shortly after the beginning of stage three. The contact forced Gibbs into the wall and caused just enough damage to take the No. 54 out of the race, ending up 35th. Despite gathering some stage points thanks to finishing second and seventh in the two stages, the Joe Gibbs Racing team is leaving Atlanta with a big “what if?” on their shoulders.

Likewise, Brandon Brown was having a very strong run after rebounding from his hard hit in the big one at Road America one week ago. Needing a win to make the playoffs, Brown finished in the top five in both stages, and a win didn’t seem like a far-fetched thought for the No. 68 team. However, much like Gibbs, Brown made significant contact with the wall and subsequently retired from the race after completing 119 of the 163 laps. Another “what-could-have-been” for Brown, who finished 33rd, two spots ahead of Gibbs.

Gibbs’ DNF allows Allmendinger to open his points lead for the regular season championship. However, Hill’s win means that no one new locks themselves into the playoffs. It does, however, leave Brandon Jones as the only non-multi-race winner this season. There are still nine races to go until the playoffs, so with five spots left, there’s still room for guys to win and sneak into the postseason.

Now, will we reach more than 12 winners? Based on the way the season is going, probably not. But anything can happen, so never say never.

For some reason, one thing I appreciate when it comes to Xfinity Series paint schemes is when teams run schemes that look identical to a Cup Series car. Joe Gibbs Racing does this all the time – usually, a car sponsored by Interstate Batteries or Sport Clips in the Xfinity Series looks identical to the paint scheme that adorns a Cup car with the same sponsor.

This week, we saw something similar, when Auto Owners jumped down to the Xfinity Series to sponsor Truex’s No. 18 Toyota, with a paint scheme that is just about identical to its Cup Series counterpart. This scheme is a lot more special however, as his brother Martin is the driver of that Cup Series edition.

Besides, I can’t resist the different shades of blue that appear throughout any Auto Owners car that hits the track. And that says a lot, because blue isn’t even my favorite color. With the added white on the nose and number, I can never say no to this scheme.

I might be overthinking this a little bit, but Hill pulled a great move on his teammate Sheldon Creed for the stage 2 victory – his first career stage win, for what it’s worth. But Creed is also in a position where he needs every point he can get to make the playoffs. Given that Hill already had five playoff points from his Daytona win, should he have made that move, knowing that his teammate is fighting for every point he can get?

Creed is 95 points out of playoff contention right now, which why I feel like I might be overthinking this, but Hill could have just as easily blocked for Creed so the latter could win the stage and earn the maximum ten points. It was clear Hill had one of the cars to beat, so big picture could have been something the team thought about when it came to winning that stage.

In the end, Creed’s 12th-place finish didn’t do him any favors – he’s more than likely going to have to win if he wants to compete for a championship. But if Hill laid back and let Creed take the stage win, could we have seen a momentum shift for the No. 2 team? Could they have gained even more confidence that they would win before the playoffs started? It would be hard to tell over one single stage win, but given that Creed hasn’t been the most consistent driver this season, that stage win could have helped him greatly in the greater course of the season.

It’s time to head to the New England area, where the New Hampshire Motor Speedway awaits the NASCAR Xfinity Series on Saturday, July 16, for the Crayon 200 (no, not the coloring utensil). Christopher Bell made his return to the Xfinity Series last year at this race and absolutely dominated, leading the most laps and winning both stages en route to winning his third straight Xfinity race at New Hampshire. With Bell not scheduled to race, a new face might emerge as a winner.

I didn’t care for the way the track raced.

It’s going to be worse for the Cup bumper cars. Wait for a big one. It’s what the NA$CAR brain trust is counting on.

Saddest part was when Austin thanked all the hometown fans for showing up. I’ve seen an Applebee’s more crowded on a Saturday night than fans that were in the bleachers that race!