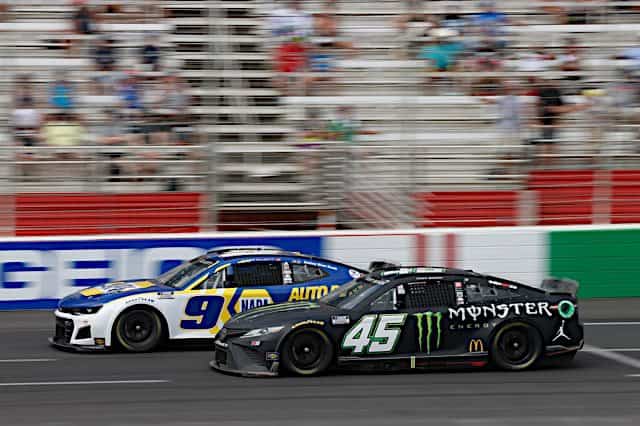 Chase Elliott became the first three-time winner in 2022, making the pass for the lead on Corey LaJoie with just two laps remaining to take the checkered flag in the Quaker State 400 at Atlanta Motor Speedway. There was a little luck involved for Elliott, first when Martin Truex Jr. was collected in a late incident from in front of Elliott, giving him a clear shot at leader LaJoie on the restart.

Elliott’s second break came when LaJoie made a run to the outside on the final lap. Elliott was able to throw a block, and while it was not perfectly clean, it was enough for the driver to get clear. The resulting caution for LaJoie stopped a run from Ross Chastain.

Elliott had the best car, winning the first two stages, and the dominoes fell in his favor at the end. Is his hot streak right on schedule as the series heads toward the playoffs?

Meanwhile, LaJoie certainly showed his ability when the cars are more equal. Will he finish what he started at Daytona International Speedway?

And don’t forget Erik Jones. Jones led 10 laps and finished fifth Sunday, his sixth top 10 of 2022. Despite some terrible luck (remember when the wheel got stuck on his car?), Jones has had some very good moments this year. He had a shot at the win Sunday, and while he fell just short, it was a solid effort from Jones and his Petty GMS team. He’s already surpassed his 2021 top fives and laps led and matched his top 10 total. Jones may not be a favorite to win down the stretch, but he’s certainly a dark horse.

Where were all the fans? The stands on Sunday were notably sparse in Atlanta, a track that’s only gotten a second race back in the last couple of years. After the reconfiguration for the 2022 season, the track is supposed to race like a smaller Talladega Superspeedway, wrecks and all, so what gives?

Summer heat aside, why didn’t fans flock to Atlanta to see superspeedway-style racing? It turned out to be relatively cool for Atlanta in July, but people planning ahead couldn’t count on it being bearable.

For one thing, full-sized Talladega is only a couple of hours from Atlanta. The two essentially compete in one big market. Talladega’s fall race features cooler weather and playoff implications.

A Saturday night race might be a better draw for Atlanta in summer, because of the usual heat and humidity, but fans in the area who want Talladega can simply go there. Meanwhile, fans who don’t like the big packs can take a weekend trip to Charlotte Motor Speedway or Darlington Raceway.

Speedway Motorsports got the racing it envisioned with the reconfiguration. It just got it in a market that didn’t really want or need it.

Last week’s winner Tyler Reddick spent the first half looking like he might go back-to-back, sitting among the leaders and finishing second in stage two. What Reddick couldn’t control were the other cars. He got collected after Ty Dillon turned a slower Garrett Smithley, and that was the end of his bid for a second win in as many weeks. Reddick finished 29th.

Spring Atlanta winner William Byron has almost the same story to tell as Reddick. After scoring a few stage points, finishing fifth and eighth, he was swept up in the same incident as Reddick, finishing 30th on the day.

Active Atlanta win leader Kurt Busch also had a good day going right up until the final lap. Busch showed that he can drive at Atlanta no matter what configuration the track boasts, finishing seventh and fifth in the first two stages. He was running with the front pack in the closing laps, and while he wasn’t close enough to battle for the win, he was aiming for a top five. Instead, he got collected in LaJoie’s spin and wound up just a lap short in 22nd.

Chastain was involved in a pair of incidents on Sunday. One of them was, at worst, incidental, but the second may be what stands between Chastain and a title.

In the first incident with Truex, Chastain tried to give Truex room, and Truex didn’t hold his line at the same time. Could Chastain have backed out? Sure. But we saw how well a slower car fares in traffic at speed when Ty Dillon ran into Smithley. Atlanta isn’t quite Daytona or Talladega, but it’s close enough that backing out is foreign territory to drivers.

Chastain’s second incident, though, was avoidable. It was also with Denny Hamlin, who’s already had a beef with Chastain this year and vowed payback. Chastain did not intentionally wreck Hamlin, but he didn’t avoid the contact as he should. And Hamlin may not let this one go. Wrecking Chastain intentionally in the playoffs would be a pretty dirty move by Hamlin and could have consequences (ask Matt Kenseth about that), but isn’t off the table.

Chastain is a blue-collar driver used to racing for his life. Racing for a title is a different animal. Chastain has shown he’s absolutely capable. But he still needs to learn the long game.

Last year’s race at New Hampshire Motor Speedway set up a playoff scenario similar to what we’ve already got this year, adding yet another new winner to the list in Aric Almirola, his only hope of a playoff berth in 2021. It was also a surprisingly good race despite early rain. New Hampshire is a hit-and-miss track as far as the quality of racing, and even being one of the best in all of 2021 was a pleasant surprise.

But the Next Gen has struggled on short flat tracks, so New Hampshire is a test in that regard. Can Almirola repeat? Can another winless driver find victory lane? Truex has had success there dating back to his days in the ARCA Menards Series East, but has yet to take home the giant lobster trophy for a Cup race.

Ryan Blaney is also strong at New Hampshire, having scored four top fives in the last five races there. He even led 64 laps en route to a fifth-place finish at the track last season. Meanwhile, it’s harder to get a read based only on a couple of races, but Custer has been solid there in his pair of Cup starts. He finished eighth in his rookie season and followed that up with a 14th-place run last year.

And don’t count out the winningest active driver at the track: Kevin Harvick. He’s got four wins at the track and has finished outside the top six just once in the last eight races.

If the teams have the car figured out, this race is just another wild card on the season.

How… is the regular season going to wrap up?

There are still seven races to go, so absolutely nothing is settled as far as the playoffs are concerned. In fact, the waters could get muddier as those seven races feature a flat mile, a flat two-mile, two road courses, whatever Pocono Raceway is, a flat three-quarter-mile and, to top it all off, Daytona.

The Next Gen car has been at its weakest, in terms of racing, on flat tracks. The spring race at Richmond Raceway wasn’t particularly compelling. The bigger, yet still flat Michigan International Speedway might be the better race. After all, the spring race at similarly styled Auto Club Speedway was good. New Hampshire is something in-between, so who knows. Last summer’s race at was one of the best of the regular season.

In three road course races so far, we’ve had three different winners, all of them first-time winners. We might be about out of realistic first-timers for 2022, but there are plenty of drivers for whom a win would be a good story with major playoff impact. Daytona is Daytona, so expect carnage and maybe a last-ditch playoff entry.

All in all, it’ll be worth watching. Will the flat tracks be better than in the spring? Will we see more winners to the point it boots a winner from the playoffs? Currently, that would put Chase Briscoe on the outside looking in.

There’s a lot of racing left.

I noticed that the crowd, is that the right word? was very sparce.
Thank you for not jumping on the “let’s crucify Chastain” bandwagon.
The incident with Truex wasn’t his fault, that’s pack racing. This track was redesigned to do just what it did, wreck racecars.
The second one where he got lose & pushed up was on him & he said so on his radio.
I think there might be some jealousy issues here also. Austin Dillon was whining like a mashed cat in his interview. He probably wouldn’t still be in Cup if it weren’t for pampaw. As for Chastain’s Championship prospects, He’s what, 29 years old? The one person who’s making the most noise about that, isn’t going to be around as a driver much longer.
Don’t forget that Elliott wrecked Lajoie, for the win, & everyone seemed to be fine with it.

The crowd at the SRX track on Saturday was pathetic. I believe there were more family and friends of the drivers in the pits than people in the stands.

Chastain was just giving Hamlin a dose of his own medicine after, on lap 25, Hamlin nudged Cahastain in the left rear to move him out of the way. What’s good for one goose is good for another goose. Payback is a beach.

You usually buy tickets in advance and yesterday’s cool weather wasn’t known beforehand. Gas prices are starting to affect a lot of things. Not sure what the status of nascar ticket pricing is, but odds are those have increased as well.

NASCAR hasnt figured out economics 101, Supply and Demand. There is no demand, but they keep raising prices like there is! Between Bidenflation and ticket prices, no wonder no one was there.