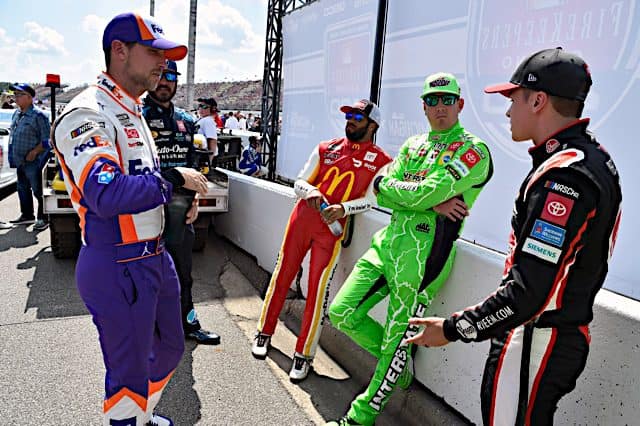 HAMPTON, Ga. – Both Bubba Wallace and Christopher Bell already have one common thread, in that each can likely clinch a spot in the NASCAR Cup Series playoffs with a win in Sunday’s Quaker State 400 at Atlanta Motor Speedway.

They have at least one other common thread – that both will head into Sunday’s race with new crew members following this week’s swap among the pit crews of both teams.

“Both of us have had our struggles, for sure,” Bell said. “And it’s cost both of us some potential good finishes.”

Both pit crews have been maligned throughout the season, with the pit-road stumbles of the No. 23 being tossed into the spotlight following Wallace’s much-publicized outburst directed toward his team last month at Nashville Superspeedway.

“We’re trying to improve on all aspects of our race team,” Wallace said of the changes. “That’s out of my control. We’re all trying to push the needle to be better, and if this is a step in that direction, then I am all for it.”

But, as Bell notes, issues on pit road have not been limited to the No. 23 of Wallace.

Both drivers said on Saturday that they were present at this week’s pit-crew practice for both teams.

“We have those interactions, that’s been a positive,” Wallace said.

Mid-season crew swaps are nothing new for Bell, who recalled a pit crew change while driving for Joe Gibbs Racing in the NASCAR Xfinity Series.

“It’s so tough. I enjoy working with everyone at Joe Gibbs Racing through the pit crew stuff,” Bell said. “I don’t want to throw anybody under the bus, but it hasn’t been working, what we had. So I encourage anything to better our position.”

So much for not even making it appear that the two 23X1 teams aren’t really the 5th and 6th JGR teams.
We all know the games the big teams play, they just usually try not to make it so obvious that they are skirting the intent of the rule.

Although, that was kind of the opposite of this situation. Weird. Maybe Bell is being slowly walked to the door? Ooh, I almost forgot… making room for the Grandbaby?

Last edited 6 months ago by Jeremy
0
0

Yeah, now that you mention it there was some sort of BS back when Furniture Row was the JGR satellite team. I don’t remember the specifics. Still seems like the line between organizations should be better drawn.

I have to wonder just how much heat that Barker, Wallace’s CC is feeling.
He could well be the next domino to fall.

Just proves what a joke NASCAR is, we all knew this was Gibbs team and not MJ’s or denny’s now we know for sure,

The pit crew from Bubbas’ team went to Bells, and promptly had a wheel fall off as Bell left his pit stall today.