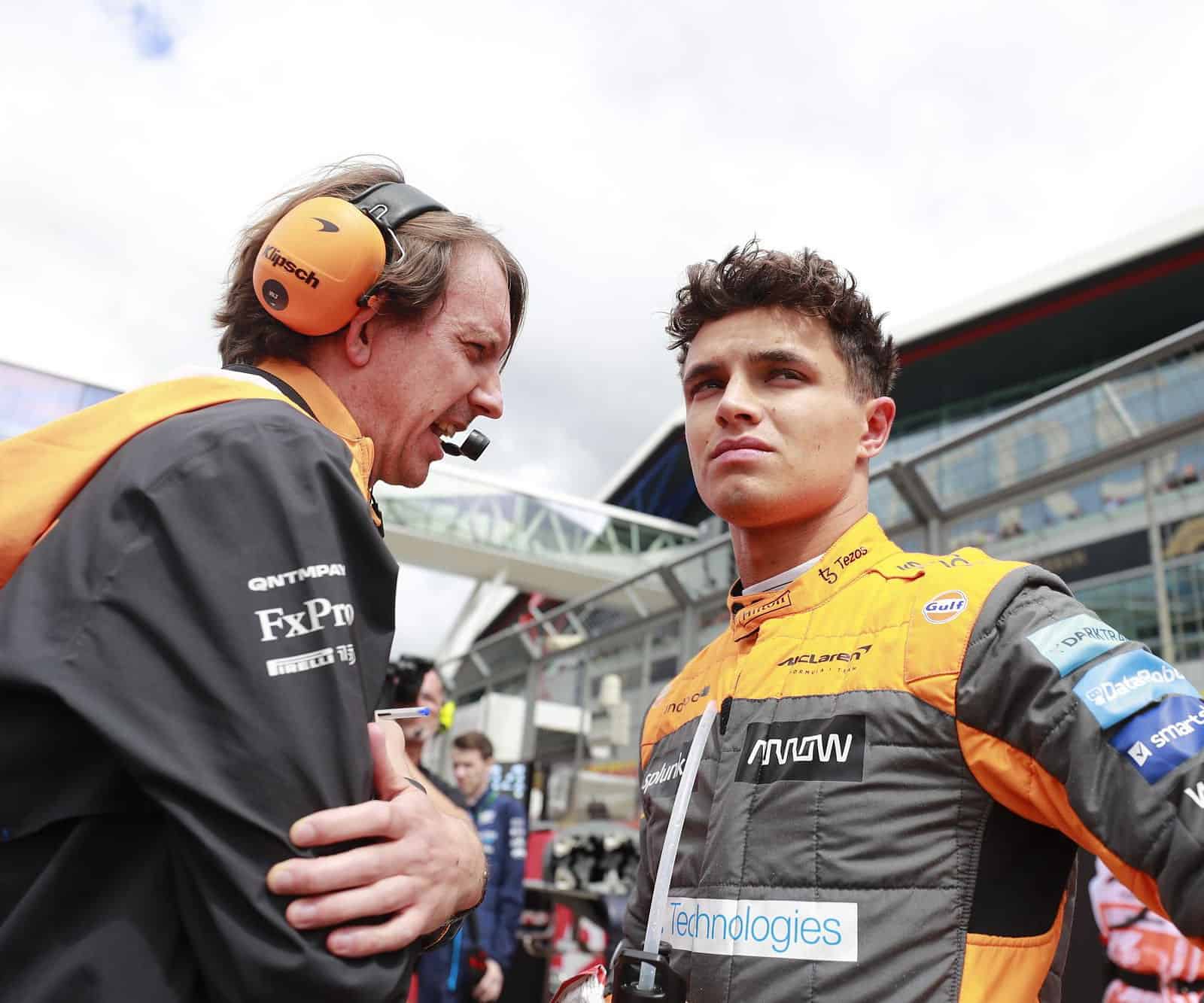 Protestors made their way onto the track during the first lap at Silverstone.  They had gathered outside of the track during the weekend and there was reason to believe they would make a statement inside the confines at some point.  What are your thoughts on how it was handled?  What could have been done differently?  How do sports manage these concerns?

Michael Finley: We were extremely lucky that the field was already under full course yellow conditions by the time the cars got to where the protesters snuck onto the racetrack. Obviously, they have a right to protest, and things may be a bit different if they did this even in the midway, but stepping out onto a racetrack only endangers and undermines the cause. And honestly, the cause itself- protesting against fossil fuels- isn’t really the best for an F1 race, considering the carbon-neutral pledge and Sebastian Vettel zooming around the track before the race in a Nigel Mansell-era Williams powered by an experimental carbon-neutral fuel. People should be protesting the fact a Hungary GP is happening at the end of this month, considering the country’s obvious human rights violations. Or the mountains of gold handed over by countries such as Saudi Arabia every single year for a glorified PR event.

Alex Gintz: Free assembly, and therefore protest, is among the most fundamental rights of the individual. I fully support the decision of those involved to exercise their right to voice their concerns on issues of importance and contention.

Just Stop Oil, an organization barely five months old, seems to have made a strategy out of the disruption of recreational events. Just Stop Oil associates attempted to breach the entrance of the Royal Albert Hall during this year’s British Academy Film Awards in March. No less than three soccer matches were disrupted by Just Stop Oil associates in March, and on July 5 in London, individuals associated with Just Stop Oil vandalized a display of Leonardo da Vinci’s The Last Supper and glued themselves to the painting’s frame by their hands.

This activism is so performative in nature that I honestly can’t bring myself to believe that those involved are even worthy of the labor and paperwork involved in producing criminal charges. I just can’t take them that seriously. Were Just Stop Oil’s agenda to include more direct action targeting the oil industry, I may feel something approximating admiration for their actions, despite our differing viewpoints. The act of attempting to sit on a live racetrack to promote the aim of halting fossil fuel production in the U.K. is only saved from being laughable by the fact that it is so muddleheaded.

Race tracks are large facilities, I can’t fault Silverstone beyond forgiveness for not being able to keep protesters off of the racing surface. Perhaps more security is necessary. I don’t much like the idea of seeing uniformed guards every 10 feet at a track, but even more so, I don’t like the idea of any overzealous activists being struck by a car moving at close to 200 mph. That’s not what anyone is there to see.

Ava Ladner: While many want to see politics left out of sports, it is an illogical and unobtainable concept.  Sports are products of cultures and societies and within those societies, there are issues that often get reflected in sports, some egregious, some that feel so natural that we do not really notice their presence.

Because of their place in society, sports have been and will continue to be sites of protest, and with good reason––because people watch them.  That, however, does not make protesting on track at an F1 race a proper target.  For the litany of concerns the sport touches upon, the recent protest seems laughable, especially when set against the backdrop of a sport that races hybrid vehicles and continues to explore developments in moving away from standard combustion engines. Wrong method, bad execution.  They are lucky no one is dead.

Ferrari and Red Bull may have figured out how to handle the porpoising issue through a more flexible floor that appears to need scrutiny in the regulations.  Combined with his prospect and the fight that many teams are pushing against FIA intervention in porpoising, how do you see things playing out?  How involved should the FIA be in mitigating the porpoising issue?

Gintz: I’ve yet to form a strong opinion on the porpoising issue. Driver safety is paramount, and Lewis Hamilton’s discomfort in Azerbaijan, for example, was anything but performative. I won’t pretend to know better than the FIA on this one; I just hope this doesn’t result in more oversight or scrutiny than is absolutely necessary.

Finley: The FIA should involve themselves in this issue because the reality is that the drivers are not going to choose to go slower in return for a safer ride. And it’s not just F1 drivers; probably the best example of this is Dale Earnhardt Sr., who eschewed obvious safety innovations up to literally the day before he died.

Ladner: One of the jokes in F1 is that engineers believe the driver is the weakest part of the car, that if they could just get the driver to do what they want their creation would be perfect.  To this end, drivers, as hyper-competitive individuals, will push themselves beyond their limits.  It is easy to decry that the FIA is catering to Mercedes and helping them out with a car that has been a handful and protecting one of the sportʻs legends in Hamilton.  The reality is that Hamilton is not the only driver suffering through races and to what end?  At some point, the sport has to govern idiocy and ensure that the drivers return to the paddock in good health.

Carlos Sainz earned the first win of his F1 career at Silverstone.  How likely are we to see another first-time winner this season?  Are there any drivers other than George Russell or Lando Norris that could be the ones to do so?

Finley: I think the rest of this year is going to devolve itself into another title fight between Charles Leclerc and Max Verstappen. Albeit one more tame and less close than last year’s now-legendary battle. If anybody else wins outside of Red Bull or Ferrari, it would probably be a cagey veteran like Hamilton or Alonso.

Gintz: Aside from Norris and Russell, I just don’t see it happening. Yuki Tsunoda, Lance Stroll, the Haas and Williams team, Zhou Guanyu. They simply don’t have the car under them for a race win. Perhaps we could find a Monza 2020 scenario where someone like Zhou comes out on top (Alfa Romeo looks quicker than their results show), but barring any freak circumstances, Russell will be the only other first-time winner this year.

Ladner: Neither Norris nor Russell will win.  Sainz was the first and last first-time winner of the season.

As simply as you can, answer whatʻs up with Ferrari?

Gintz: Shot in the dark. From the outside looking in, Ferrari strikes me as an organization where someone, and I’m not sure who is exercising more authority than their competence warrants while the rest of the employees try to mitigate the fallout from unchecked and unwise decision-making. This ball-dropping and opportunity-missing style from Ferrari has been a problem of discussion for the better part of a decade now, and I’m running out of clues as to what the underlying cause may be.

Finley: Ferrari has a number of intrinsic and internal problems that can really all be traced back to Enzo Ferrari deciding to stop getting too close to his drivers before they died, like most of his drivers from the 1950s and his son Dino. Ferrari is still very much Enzo’s team, designed around pitting people against each other naturally and the de-emphasis of the driver over the team. It’s not designed to be a modern 21st century F1 team, it’s more a stable from the 1960s. It speaks to how talented Jean Todt, Ross Brawn, and Michael Schumacher were they still dominated in spite of these issues in their era. All three of course would be forced out prior to the end of their expiration date before they become bigger than the horse emblem. The only driver since Niki Lauda and besides Schumacher to actually rise above all of the BS is Alonso, and that’s again more because of how special Alonso is as a driver.

To make it more simple, “lol Ferrari” as the kids say.

Ladner: At this point, Ferrari making bad decisions is the norm, even with race-winning cars.  Ferrari gonna Ferrari.

Too bad Tony Stewart wasn’t in the race. He’d know just how to handle on-track protestors.