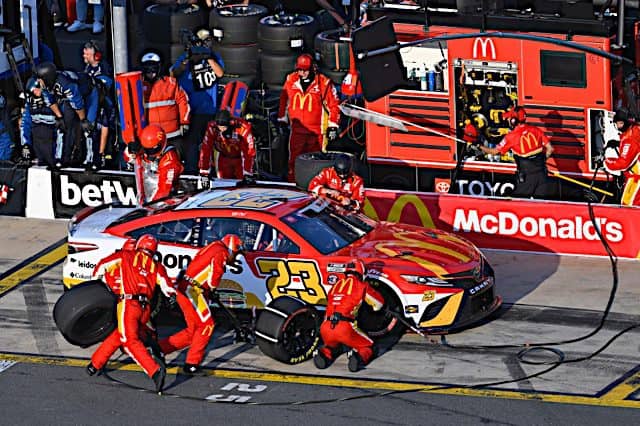 Changes have been made to the Toyota NASCAR Cup Series pit crews of Bubba Wallace and Christopher Bell ahead of the series’ 19th race of 2022 at Atlanta Motor Speedway this weekend, according to the team’s rosters on July 5.

The No. 23 team of Wallace has gained a new front tire changer and tire carrier, Housten Stamper and Joe Crossen. Both are former members of the No. 20 team of Bell.

The Joe Gibbs Racing entry will in turn be joined by two new tire changers and a tire carrier. All three new members, Jackson Gibbs, Nick McBeath and AJ Rosini, have all served on Wallace’s crew at some point in 2022.

The changes come two weeks after Wallace’s frustrated radio transmission which took place after a loose wheel occurred during a pit stop, adding to the list of pit stop mistakes from the No. 23 team so far this year.

The No. 23 is also one of 12 teams to have received a lost-wheel penalty after suffering a detached wheel at Circuit of the Americas in May.

The new roster arrives eight races before the Cup Series playoffs and while Bell sits on the bubble of the top 16 in points. He is only 20 points ahead of 17th-place driver Kevin Harvick for the last playoff spot.

If I was Bell I wouldn’t be happy at all. He’s got a chance at pointing into the playoffs. Seems Gibbs is willing to sacrifice Bell for the possibility of getting bubba a win. Hope the wheel falls off after the first pit stop.

It will never happen, but I’d love to see a pit crew that’s been thrown under the bus by the driver (Harvick, baby Busch, Bubba) just put the tires, jack and gas can over the wall during the next pit stop and just walk away.

Didn’t help Danica and it won’t help Blubber…er Bubba. He is Danica 2.0!

Silly me, and here I thought Joe Gibbs was only allowed to have 4 teams.

That is a NA$CAR “rule” in the “rule” book that only applies to owners not named Mr. H or Reverend Joe! Just like many of the other “rules”!