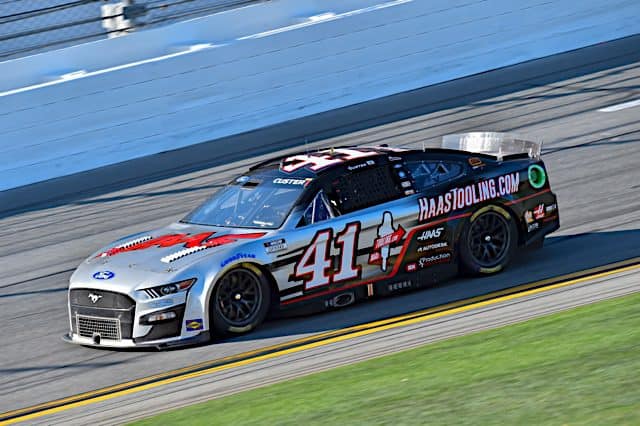 Is Justin Allgaier a championship favorite?

With 18 wins at 13 tracks and the most all-time wins for JR Motorsports (15), Justin Allgaier has carved out a solid career in the NASCAR Xfinity Series. However, there is one big win absent from his resume: a championship. Allgaier won a career-best five races in 2018 and has made the Championship 4 on four occasions, but he has yet to take home the top prize in NASCAR’s second series.

But if there is ever a chance for Allgaier to win it all, 2022 appears to be one of his best shots. First, JRM has established itself as the best team in 2022. After it appeared that Ty Gibbs, Noah Gragson and AJ Allmendinger would be the “Big 3” to beat, Allgaier and teammate Josh Berry have both picked up two wins to throw their hats into the ring. Allgaier himself has shown race-winning speed numerous times, and he is up to 462 laps led in 15 races: on pace for the most he’s led in a single season.

His performance at Charlotte Motor Speedway in May is especially notable because he led 63 laps; he had led a combined 14 laps in 19 previous Xfinity starts at the track. His dominating win at Nashville Superspeedway also deserves notice, as Allgaier himself said that it was the fastest car he had ever driven post-race.

And of course, the finale is at one of Allgaier’s best tracks in Phoenix Raceway. There’s still half of the season to go, but with his current hot streak, it’s hard to bet against him come November.

Should I stay or should I go (pit)?

With a four-lap shootout deciding last Sunday’s (June 26) NASCAR Cup Series race at Nashville Superspeedway, there was split strategy at the front of the field. Leader Chase Elliott stayed out, while the trailing Joe Gibbs Racing cars of Kyle Busch, Denny Hamlin and Martin Truex Jr. elected for either two or four tires.

And as the famous saying goes, those that forget history are doomed to repeat it. The four had dominated the entire race, but it was not reflected in the finishing results. Elliott held on to win, but the JGR cars had four laps to gain 11 spots on the racetrack. Hamlin made his way up to sixth; Truex and Busch finished outside of the top 20.

The decision to pit was notable because it’s not even the first time this season that JGR cars have taken themselves out of winning contention with a late pit stop.

To play devil’s advocate, JGR was not in the lead like it was at Las Vegas Motor Speedway. Busch had lost touch with Elliott, and the JGR trio looked weakest at the end of the night after dominating all day. Clearly, they needed something extra to beat the No. 9 car in the final laps. But just like Vegas, there were too many cars on the lead lap at Nashville for them to come in for service. The only way taking tires would’ve worked is if everyone left Elliott out to dry. But with 20+ cars on the lead, several mid-pack cars will have a better chance staying out for top-five track position. And that’s exactly what happened.

Had the restart been with 15 laps to go, the situation would’ve worked out fine. The JGR cars would’ve had ample time to negotiate the cars ahead to run Elliott down. But with the race coming down to what is essentially an overtime restart, pitting from the top five is almost never worth it.

What drivers would benefit from crew shakeups?

For the rest of 2022, Grant Enfinger will be working with crew chief Jeff Hensley. The pair had great success in the 2020 season, as Enfinger won a career-high four Truck races in 2020.

The change comes after Enfinger’s relatively disappointing start to the 2022 season. While Enfinger has finished in the top 10 in half the races and is currently above the playoff cutline in ninth, he has struggled to find speed and challenge for the lead all year. In 14 Truck races this season, Enfinger has had an average running position better than 10th twice.

GMS Racing certainly hopes that the duo can replicate its previous success. And as one of the first midseason crew chief shakeups in 2022, perhaps there are other teams and drivers that might need a change of scenery to get things going.

On the Cup side, it’s been a disappointing year for Cole Custer. While he has suffered a fair share of bad luck throughout the season, Custer’s last top 10 finish came at Dover Motor Speedway in May – of last year. Throughout his entire Cup career, he has been paired with Mike Shiplett, the crew chief at his side when he won seven Xfinity races in 2019 and a Cup race at Kentucky Speedway in 2020.

But with Custer 27th in points through 17 races this year, something needs to change. And perhaps that change is a crew chief swap for Drew Blickensderfer, Aric Almirola‘s crew chief, or Richard Boswell, Riley Herbst‘s crew chief in the Xfinity Series. If the results aren’t there, SHR should be trying anything and everything to get the No. 41 team competitive.

In the Xfinity Series, it’s been a rollercoaster season for Kaulig Racing. While Allmendinger is leading the point standings with two wins, defending champion Daniel Hemric had just one top five in 15 races while Landon Cassill has led zero laps all season. Given that it’s the first year for both drivers on the team, it’s too early to make any changes just yet. But if things are looking the same come September, it might be time for Kaulig to make a swap before the playoffs begin.

Chase Elliott heads into Road America with a win last weekend. Does anyone else have a chance?

Elliott was a force to be reckoned with at Road America last July, as he dominated the final stage of the race and gapped second-place Christopher Bell by more than five seconds. It was the seventh road course win of his career at 25 years of age, and it marked the fifth road course that he had won at.

Elliott will head into Sunday’s (July 3) race as the unquestioned favorite, but he isn’t an absolute lock to win like he was in 2019 or 2020. His road racing season started with a largely uneventful race at Circuit of the Americas, and while he dominated the early stages at Sonoma Raceway, he wasn’t a contender at the very end. Clearly, the No. 9 team hasn’t been as stout on road courses this year as they’ve been in the past.

With that said, Road America was one of the two road races he won in 2021 — and it was the only one he won in dominating fashion. That says something for this weekend, especially when Elliott is the series points leader and coming off of his second win of the season.

Behind Elliott, the Trackhouse Racing Team duo of Ross Chastain and Daniel Suarez cannot be ignored. The pair dominated the first two road races this season, and there isn’t a reason to doubt them again this weekend. Another dark horse for the win is Kyle Busch. Last year, Busch finished third at Road America after starting last. This season, he is on pace to have his most successful season since 2019, and he is showing speed almost every week.

Behind them, Bell, Kyle Larson, Truex and others could show up to play. It’s been that kind of season in 2022.

Which team would benefit from a driver shakeup?