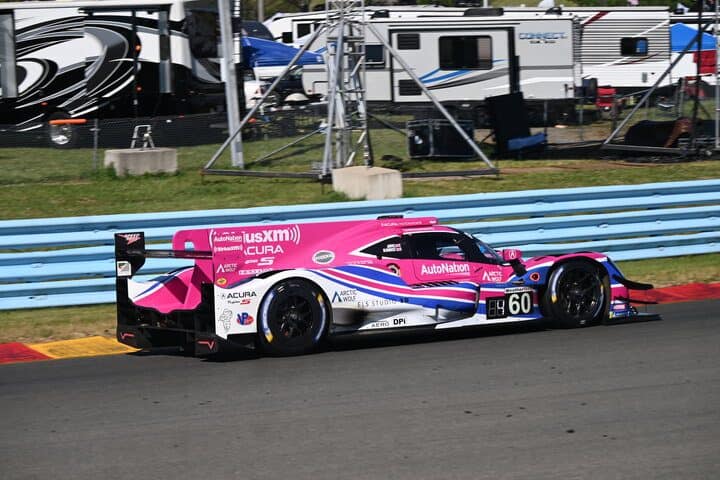 WATKINS GLEN, N.Y. – Meyer Shank Racing with Curb-Agajanian’s Tom Blomqvist was fastest overall in both IMSA WeatherTech SportsCar Championship practice sessions at Watkins Glen.  His lap at 136.636 mph towards the end of Practice No. 2 Saturday morning (June 25) is an unofficial track record.

Blomqvist was fastest in the opening practice session Friday afternoon (June 24) with a lap at 134.185 mph.  The time was set 35 minutes into the 90-minute session.

While the team’s pace was decent, not all was well for MLT Motorsports.  With six minutes remaining in the session, Dickerson spun in turn 7 and made contact with the tire barrier.  This brought out a red flag that ended the session early.  A cursory look didn’t reveal too much damage to the team’s Ligier JS P320-Nissan after it was dropped off by the tow truck.

In the GT classes, it was the GTD teams that were fastest on the day.  At the end of the 90-minute session, Team Korthoff Motorsports’ Dirk Mueller was fastest with a lap at 115.257 mph, good for 26th overall.  Mueller’s lap was three-hundredths of a second faster than the Aston Martin of Magnus Racing’s Andy Lally, who only did eight laps in the session.

VasserSullivan’s No. 12 Lexus for Frankie Montecalvo was third fastest, then the AF Corse Ferrari of Toni Vilander.  Turner Motorsport’s Bill Auberlen was fifth in his BMW.

The Heart of Racing’s Alex Riberas was fastest in GTD Pro with a lap at 105.194 mph, good for 30th overall, but only fifth of the 23 GT cars entered.  Riberas’ lap was .046 seconds quicker than the Ferrari of Risi Competizione’s Daniel Serra.  BMW M Team RLL’s Connor de Phillippi was third, then Vasser Sullivan’s Ben Barnicoat.  WeatherTech Racing’s Maro Engel was fifth.  18 of the 23 GT cars were within a second of Mueller’s best lap in practice.

In addition to the red flag right at the end of the session, there were three other red flags that didn’t involve crashes.  The first occurred right at the beginning of the session when HTP Winward Motorsports’ Philip Ellis stalled on course in the Esses.  During that red flag, Era Motorsport’s Dwight Merriman stalled exiting the Esses and missed an hour of the session.

Later on, Forty7 Motorsports’ Wayne Boyd pulled into the short course with mechanical issues.  He tried to make it back to the pits, but the car stalled to cause another red.  Finally, Performance Tech Motorsports’ Cameron Shields stopped on track to draw another red flag.

Saturday morning’s 105-minute practice was action-packed.  There were nearly a dozen spins during the session and three red flags.

The most serious of the red flags occurred when Hardpoint’s Katherine Legge and Gradient Racing’s Kyffin Simpson collided and went into the barriers in turn 6 to bring out the second red flag.  Both drivers walked away from the crash, but Gradient Racing will miss qualifying.  According to Gradient Racing’s PR rep Declan Brennan, the car has “substantial damage” from the incident.  They are confident that they will be able to start the race on Sunday, but are done for the day.

The final red flag came out with 19 minutes to go when MLT Motorsports’ Tyler Maxson stalled on-track.  He was able to get refired and staggered his way back to the pits.

There were a number of other incidents in the session, including Muehlner Motorsports America’s Dillon Machavern clipping the grass under braking and spinning in the Inner Loop.  He didn’t hit anything, but came very close to clipping the inside wall on entry.  Racing Team Nederland’s Dylan Murry spun in turn 1 while trying to get past Tower Motorsport’s Rui Andrade as well.

For the vast majority of the session, lap times were actually slower than they were during the opening session Friday afternoon.  Then, the 15-minute portion of the session reserved for DPi and GTD Pro arrived at the end.  Here, the speeds increased.

Wayne Taylor Racing’s Filipe Albuquerque was able to put his Acura on top with the first lap in the 90-second bracket.  In the closing minutes of the session, Blomqvist was able to put down the quick time of the weekend.  The lap is five-hundredths of a second quicker than teammate Oliver Jarvis‘ current track record, but track records can only officially be set in qualifying.

In LMP2, Racing Team Nederland’s Giedo van der Garde was fastest with a lap at 131.938 mph, good for eighth overall.  Van der Garde ended up more than three-quarters of a second ahead of Jensen.  DragonSpeed’s Sebastian Montoya was third, then Bomarito and Era Motorsport’s Ryan Dalziel.

Sean Creech Motorsport’s Malthe Jakobsen was fastest in LMP3 at 122.806 mph, good for 15th overall.  Jakobsen’s lap was four-tenths of a second faster than Dickerson.  Braun was third, then Matt Bell in the AWA-run Forty7 Motorsports Duqueine and Andretti.

In the GT ranks, the GTD teams had the advantage over the GTD Pro organizations for much of the session.  Then came the Pro-only time.  Barnicoat put down a lap at 116.197 with nine minutes remaining to top the class in 26th overall.

Barnicoat’s lap was roughly one-seventh of a second faster than The Heart of Racing’s Ross Gunn, who was fastest in class for the majority of the session.  Pfaff Motorsports’ Mathieu Jaminet was third in his Porsche, then de Phillippi and Engel.

In GTD, Team Korthoff Motorsports was quickest once again, but this time it was Stevan McAleer that topped the charts with a lap at 116.142 mph, 27th overall and just five-hundredths of a second slower than Barnicoat.

McAleer’s lap was .032 seconds faster than Auberlen.  Mario Farnbacher was third fastest in the Gradient Acura prior to Simpson’s crash.  NTe Sport’s Jaden Conwright was fourth in his Lamborghini, while Paul Miller Racing’s Madison Snow was fifth.

Qualifying for the Sahlen’s Six Hours at the Glen is scheduled for 1:15 p.m. ET Saturday afternoon.  The session will be streamed live at both IMSA.com and Peacock.

There is an error in this reporting for MLT Motorsports. Dakota Dickerson did not spin and hit the wall. It was teammate, Tyler Maxson.