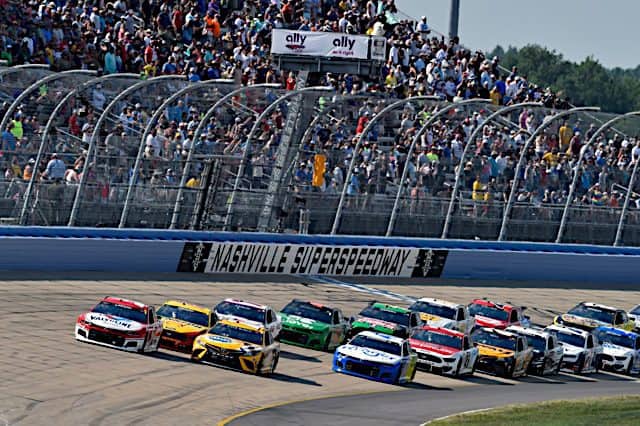 This upcoming weekend, all three of NASCARʻs premier touring series will be visiting Nashville Superspeedway. If you are one to believe in spirits smiling down at us, then this would be time to postulate that Bruton Smith, who passed away Wednesday (June 22), is enjoying the sport making a stop at one of his tracks just after his death.

One might wonder, however, if the joke is on everyone else. The addition of Nashville to the NASCAR calendar came at a time when shuffling and re-shuffling the schedule became a vital element of keeping the sport going during COVID restrictions and curious circumstances. That the track basically took one of Dover Motor Speedway’s spots on the calendar is an added aspect of the changes.

One of the funny parts of the swap is that the series replaced one concrete track with another, as Nashville is now the longest concrete track on the schedule. Whether or not that is a good thing may be up for debate.

The inaugural Cup race in 2021 featured a host of brake and tire failures that led to a total of 11 cautions for 60 laps. For a race that is 300 laps long, having one-fifth of them taken by yellow-flag slowdowns does not equate to brilliant racing.  And if you can’t remember, somehow Kyle Larson squeezed enough gas out of his tank to hold off Ross Chastain for the win. Funny that Chastain has more wins than the defending champion Larson at this point in the year; who could have seen that coming?

Fascinating questions aside, the Nashville trip is a peculiar one. Had Bruton Smith and Speedway Motorsports not acquired Dover Motorsports (for roughly $132 million), then it is likely that not only is there no Cup race last year or this year, but there is reason to wonder whether Nashville Superspeedway would even exist.

(A quick aside: just what is it that makes some tracks Superspeedways and others just Speedways? What are the parameters? Who decides?  Is there a governing body of superspeedway-ness? Does someone just point at the track and say, “it’s super”? At least it is not an International Superspeedway because then we don’t have to worry about what itʻs wearing or if it is dating a Spanish, Italian, or Greek supermodel.)

While NBC Sports/USA network/whichever other network on the NBC platform will be involved in broadcasting the race might make mention of Nashville’s history there is reason to re-examine things. Nashville, born in 2001, began hosting NASCAR Xfinity, Camping World Truck and NTT IndyCar series races that year but the Cup Series was never part of the program. A shiny new track on the schedules but never one to make its way to headliner status.

See also
Truckin’ Thursdays: The Regular Season Title Contender No One is Talking About

By 2008, IndyCar had gotten its fill and made a decision not to return. Then, in 2011, the Xfinity and Truck series held what, at the time, were the last races. Declining attendance/interest caused the track to fall by the wayside — something that likely was influenced by the lack of a Cup visit. Without a marquee event to sell to the community, there is reason to believe that fans in the area felt they were not worthy of NASCAR’s spotlight. Seeing themselves as fans from a second-rate market may have surely been a factor.

Then the track became another dormant institution of NASCAR’s hubris. Another facility left to sit, for weeds to takeover and for the earth to reclaim. For 10 years, the track sat, hosting racing experiences and whatever events like drift competitions. As far as being part of the broader national landscape, it became another track left to be forgotten. Until it wasn’t.

With fluctuations in NASCAR scheduling, the track became an asset, one worth not only returning to but also adding to the Cup schedule. Never mind that the grandstands held only 25,000 people, the venue now had value that seemed to work with the sport’s desire to shake things up and make the schedule feel less predictable.

The question arises, however: What if the fans got it right the first time? What if the fans in and around Nashville got tired of the racing at the superspeedway because the racing was not so good? What if the series was not the issue but the track?  These questions will be put to the test this weekend. While Xfinity and Trucks have not undergone the same changes that the Cup vehicles have, they provide a way of measuring racing entertainment success.

Cup works as the fantastical outlier. Running the old car last year means that comparing the race to this year’s iteration means little. The new car has shown to be a welcome participant on the larger tracks which may offer hope in the Cup Series putting on a lovely show this Sunday. Such expectations should be coupled with the recognition that the track has a history of disappointing fan reactions and lots of caution laps.

Should another brake-tire-cautionfest come into existence, there will be every reason to believe that Nashville will become another questionable property in the Speedway Motorsports empire.