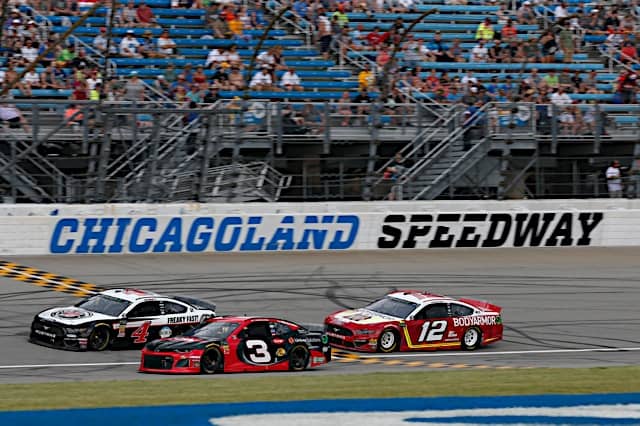 Stewart-Haas Racing announced a pit crew shakeup for the No. 4 team. Will this be the difference that brings Kevin Harvick back to victory lane?

After a 22-second pit stop dropped Kevin Harvick from third to seventh on the final round of pit stops at Sonoma Raceway, Stewart-Haas Racing announced that Harvick’s pit crew will have a new front tire changer and jackman. The new crew members previously worked on the No. 14 team with driver Chase Briscoe.

It’s been a frustrating season for Harvick; his winless streak is now up to 59 races, and he is currently seven points below the playoff cutline despite being 12th in points. Harvick has also struggled to run up front, as he has led just 13 laps in the first 16 races of the season.

Nevertheless, a pit crew change may be just what Harvick needs to turn his season around. The Sonoma gaffe garnered the most attention, but it’s not the first time that Harvick has been saddled with poor pit stops this season. Despite a third-place finish after late-race chaos in the Coca-Cola 600, Harvick consistently lost spots on pit road all night and had to continuously drive from the back of the field.

The changes come at the right time because Sonoma was Harvick’s best full-race performance since a runner-up finish at Richmond Raceway in April. Even more impressive is that one of his best performances of the season came at Sonoma: Harvick only has two career road course wins and has struggled on them since 2020.

If Harvick can continue showing the speed he had at Sonoma, things will be looking up if the pit crew can begin firing on all cylinders. This weekend’s race is at Nashville Superspeedway, a place where he finished fifth last year. And just a few weeks down the road is New Hampshire Motor Speedway, a race where he led the most laps in 2021. Harvick will most likely need a win to make the playoffs come September, so it will be up to him and his team to make the most of their opportunities going forward.

See also
NASCAR Mailbox: What Does NASCAR Have to Gain From a Street Race in Chicago?

NASCAR left the United States’ third-largest media market when the pandemic began, as Chicagoland Speedway has sat idle since hosting its final NASCAR weekend in 2019.

But the lure of Chicago is too big for NASCAR to ignore, and it appears that the top three series will be back in the city in some capacity for the 2023 season. Just one question remains: What track will it be?

A race through the streets of downtown Chicago has been rumored ever since Chicagoland was taken off the schedule. The race itself would be a huge spectacle and generate an incredible amount of media attention, and it would also mark NASCAR’s first foray into street course racing. Last week, Adam Stern said that NASCAR was close to announcing the race for 2023 with the removal of Road America to accommodate it.

But in the last 24 hours, a new rumor has emerged: Kansas Speedway will lose one its two dates to allow a return to Chicagoland after a four-year hiatus.

Of course, nothing is set in stone until there is an official announcement from NASCAR. But with two competing tracks vying for a spot on the schedule, which one would be more beneficial?

Chicagoland certainly looks appealing. The Next Gen car has done wonders for the racing on 1.5-mile tracks this season, and the return of Chicagoland would provide another track for the Next Gen car to shine on. After years of the schedule being oversaturated by 1.5-mile tracks, it now makes sense to add a few more. In addition, the track was completed in 2001. To see a 21-year-0ld facility that cost hundreds of millions of dollars go to waste would be a shame.

The Chicago Street Race certainly has its perks. Shutting down downtown Chicago would be a huge deal, and it would put more eyeballs on the sport than a race in suburban Joliet would. After all, road courses have generated huge ticket sales in recent years. That said, there will be concerns about the track design. Unlike traditional road courses, street courses are flat and narrow; this will provide minimal passing opportunities for the drivers racing it. And if the race turns into a parade, the novelty might be gone by 2024. Conversely, if the racing is exceptional, fans will line up to return for the future.

Chicagoland would be a safe bet to put on a good race and bring life to a track that was previously left for dead. The street course would be high risk, but also high reward. It’s now up to NASCAR to make the call for next year.

Of the drivers below the playoff cutline in all three series, who has the greatest chance of winning their way in?

There are 10 races left in the Cup Series regular season, 12 left in the Xfinity Series and three left in the Camping World Truck Series. Some drivers will be happy to have squeaked their way in during the upcoming months while others will be reminiscing about what could’ve been. But in the words of Yogi Berra, “it ain’t over ’til it’s over.”

Among Cup drivers, Tyler Reddick has the best chance of winning his way in in the upcoming months. Of course, his name sounds like a broken record by this point. Ever since his dominant performance at Auto Club Speedway in February, the question has turned from if to when he will win. It almost happened at the Bristol Motor Speedway dirt track, Darlington Raceway and Circuit of the Americas. Win No. 1 has to come soon, right?

Unfortunately, Reddick has been struggling with consistency when he hasn’t been contending for the win. With seven finishes outside the top 20 (and five outside the top 30), it’s not a surprise that Reddick is now 42 points in the red.

However, he still has the best chance of winning in because he has one big advantage over everyone else below the cut: leading laps. It’s not a perfect predictor of race wins, but the more times a driver can put themselves in a position to win, the better chance they have of finally sealing the deal. Reddick has led 249 laps this season; no one else below the cutline has led more than 75.

For the Xfinity Series, Sheldon Creed has been one of the biggest standouts below the cutline. Yes, he has finished outside the top 20 in half of his starts. But he also finished top 10 in six of the other seven. Creed is also coming off of one of his best races of the season at Portland International Raceway, where he ran top five in the first half of the race before spinning with Ty Gibbs while battling for the lead on lap 44. A crash with Alex Labbe on lap 56 then ended his day for good.

All it takes is one dominant race. And with Creed’s recent performance at Portland coupled with his resume as a Truck Series champion, he has the best chance of doing just that.

In the Truck Series, playoff eligible drivers below the cutline have combined to lead 40 laps in 13 races. But if someone in the red is to steal the show, it will be Derek Kraus.

Like the other two, Kraus has also had a feast-or-famine season with just four top 10 finishes in the first 13 races. However, he has shown more potential to run up front and contend than anyone else below the cutline. Heading into overtime at Gateway, Kraus was running second behind Christian Eckes before winding up seventh. At Knoxville Raceway, Kraus won the pole and ran top 10 all night for a solid sixth-place finish. If the No. 19 team can keep up these performances, they have a chance at pointing their way into victory lane over the next three weeks.

Is Nashville Superspeedway in trouble?

After sitting dormant for a decade, Nashville Superspeedway made a surprise return to the NASCAR schedule in 2021 by hosting its first-ever Cup race. The race sold out as expected, as it was the first Cup race in the Nashville area since 1984.

But fast forward to 2022 and things look bleaker. The track is nowhere close to a sellout in year two, and unless a huge influx of tickets is bought in the next 48 hours, the crowds will look embarrassingly slim.

The culprit? Well, there are several.

Last year’s race had decent racing throughout the pack, but the race out front was uncontested as Kyle Larson led 264 of the 300 laps en route to his third straight win. The race was also a logistical nightmare. Portable stands were set up to sell more tickets, but the parking was not expanded to accommodate the larger crowd. It was Kentucky 2011 all over again, as thousands of fans were waiting for entry in their cars by the time the race began. Finally, the forecast for Nashville this weekend is hot. It will be approaching 95 degrees when the green flag flies, and the real feel will be in the triple digits when accounting for humidity.

Put all of these together and the result is a sparsely attended race. Nashville is safe for now, as its contract runs through 2024. But if the attendance continues to be this bad, the race is as good as gone. And even if the track rights the ship in the next two years, it may very well be put on the backburner anyways in favor of Nashville Fairgrounds Speedway for 2025.

For 2023, NASCAR and Nashville need to hope that weather won’t be as brutal. If necessary, the race should be moved to a cooler month. Also, the 2021 debut needs to be a lesson for all upcoming tracks in having the proper infrastructure to support a massive influx of people. Gateway debuted without issue. Nashville had its struggles and now appears to be paying the price for them.

these cars have tire issues on a race track, i can’t imagine the problems on a street circuit with bumps and the suface of streets.

nashville attendance—–it’s been hotter than hatties here in the south for weeks. and let’s not forget the price of fuel and unreliability the airlines lately. today (friday) delta has already cancelled 30 flights out of atlanta. i seriously doubt i’ll attend atlanta in a few weeks due to the high price of gasoline. need that to get to work, so “fun money” budget has been scaled back dramatically.

Chicagoland vs Chicago streets is a no brainer. I watched the Irace version of the street course and it was a poor design. Unless they can figure out a way to incorporate a route that runs through the spaghetti bowl, hits the s-curve on Lake Shore Drive and then tackles Lower Wacker Drive (watch out for the support columns and the drift cars) along the river anything else is basically 90 degree corners. Fan access would be a nightmare. Keep the left/right at Road America. It’s a better road course than Sonoma, Watkins Glen and the F! joke known as COTA. Take away a Kansas date. They really don’t need 2. Chicagoland has always had good racing in NASCAR and IndyCar. Maybe the unique curved backstretch has something to do with that. And, for most fans, it’s easier to get to Chicagoland than it is to get to downtown Chicago. Plus the parking is free at the track as opposed to the exorbitant downtown parking rates.