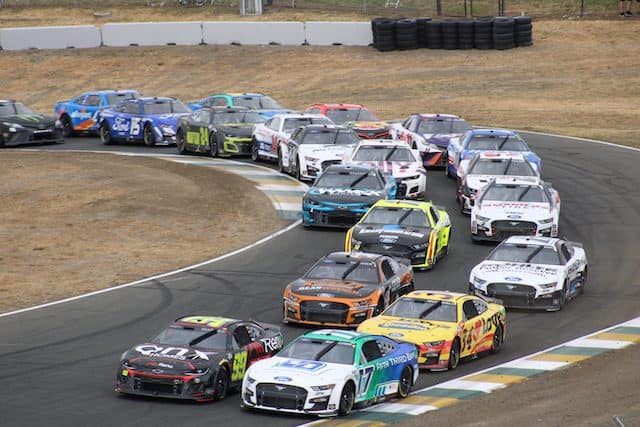 How can we get more off-weeks on the NASCAR Cup Series schedule?

There will be no Cup racing this weekend, the only such weekend from the Daytona 500 on Feb. 20 to the championship race at Phoenix Raceway on Nov. 6.

The schedule has become increasingly compact, as the finale has been moved to the first weekend in November after previously ending in mid-to-late November in order to avoid ratings clashes with the NFL.

But having a race on 37 of 38 weekends is a grueling schedule for anyone in the industry, and it goes against drivers and crew members wanting more off weeks in the schedule. This season hasn’t helped either, as Cup lost its traditional off-week on Easter Sunday and there is no longer on a two-week homestand at Charlotte Motor Speedway for the All-Star Race and the Coca-Cola 600.

To get more off-weeks, the series will either have to extend the season back into November, trim down the 36-race schedule that has been used since 2001 or return to doubleheaders.

The doubleheader idea is the most plausible, as it would allow off weeks for the teams by completing two races in one weekend. But they fizzled out just two years after their introduction, which leads to the conclusion that they were unsuccessful in ratings and fan interest.

But perhaps there is another alternative.

I mentioned in a previous column that NASCAR would be best served in dropping the All-Star Race. The race doesn’t count toward the championship, and the fan interest in the event has reached a nadir. It also doesn’t help that the race is now held at Texas Motor Speedway; this year’s event was critically panned, as it featured minimal passing and a confusing mess of a finish.

If All-Star weekend is used as a bye week instead, the number of breaks on the current schedule would double all the while ending in early November and preserving the 36-race schedule. But if the All-Star Race continues, it should at the very least be held at Charlotte in the future. Not only would it be a more exciting race, but it would also give the teams two weeks to spend time with their friends and families in North Carolina.

See also
The All-Star Race Is Not the Problem

What does last weekend’s Cup race at Sonoma Raceway mean for the playoff picture and parity?

Last week, I wrote about the drivers that would benefit the most from the race at Sonoma.

Consider it a swing and a miss.

It is incredibly rare to see three drivers simultaneously have the best races of their careers. Daniel Suarez picked up his first career win in his 195th start in dominating fashion, cementing his status as the first Mexican-born winner in the Cup Series. Behind him, Chris Buescher and Michael McDowell finished second and third, respectively, after running top five all day.

Sure, Buescher and McDowell have won Cup races before. But this was still the best performance of their careers. McDowell’s 2021 Daytona 500 victory came when the two leaders crashed after running single file for the final 30 laps. In Buescher’s win at Pocono Raceway in 2016, it took the perfect storm — literally — for him to pull off the victory.

Here, there is no asterisk that can be put next to the results. They ran and finished top three in lesser equipment all day on a difficult road course. And the finishing order at Sonoma goes to show how incredible the parity has been in 2022.

Of the 32 full-time drivers this season, 26 have recorded at least one top-five finish. 2022 is the first season with four first-time winners since 2011, which had five. After having at least one driver with an average finish below 10th since 2015, no one has an average finish better than 11.8 through the first 16 races. Finally, there have been 12 winners and 16 races, and no one has won more than two. Drivers below the top 16 in points have combined to win five of 16 races this season, and the parity has meant that Kevin Harvick is currently out of the playoff grid despite being 12th in points.

The ongoing talk this year has been whether the magic 17 winners in the first 26 races can be achieved. It’s always been a long shot, but if there is a year for it to happen, it is now. There are still big names that have yet to record a win this season, and that list includes Ryan Blaney, Martin Truex Jr., Christopher Bell, Harvick and Tyler Reddick.

And if that happens, the playoff cutline will devolve into absolute chaos. But even if it doesn’t, anyone currently without a win in the playoff standings will have to be on high alert until September after the performances that were displayed at Sonoma

The 2022 SRX Series begins this weekend at Five Flags Speedway. What will the new season look like?

The six-race, debut 2021 SRX season ended with Tony Stewart winning the first driver’s championship. It was in dominating fashion, as he won two races and scored 237 points, all the while having a 45-point margin of victory over runner-up Ernie Francis Jr.

Of the drivers that ran full-time last season, Paul Tracy, Stewart, Michael Waltrip, Bobby Labonte and Marco Andretti will reprise their full-time roles for 2022. All 2021 full-time drivers with the exception of Willy T. Ribbs will return in part-time capacities; Ribbs will join CBS’ broadcast team.

The series also has the potential to be dominated by part-time drivers, as there will be an influx of star power for 2022. Chase Elliott was the only full-time NASCAR or NTT IndyCar Series driver to compete last year, but he will now be joined by two-time IndyCar champion Josef Newgarden at Nashville as well as seven-time Cup winner Ryan Blaney, who will compete head-to-head against his father Dave Blaney in the season finale at Sharon with Elliott. Likewise, Matt Kenseth will make his series debut for a three-race schedule.

With the tracks and driver lineups set, the attention now turns to whether Stewart can repeat as champion. He certainly has a good chance of doing so, as 2021 runner-up Francis will not be full-time. However, Biffle, Newman and Hunter-Reay all have chances at being competitive. Biffle impressed in his limited 2021 starts, Newman is a dirt track expert and Hunter-Reay will be a contender after the success of his IndyCar peers Andretti and Helio Castroneves last season. In addition, all the other drivers have a season of experience under their belts and a better understanding of the cars.

The season will end just over a month later with a champion crowned at Sharon Speedway on July 23. May the best driver win.

Should the NASCAR Camping World Truck Series return to one dirt race?

In 2013, the Truck Series became the first national series to return to dirt since 1971 when it scheduled a race at Eldora Speedway. Eldora remained on the schedule until the reshuffling of the 2020 schedule due to the COVID-19 pandemic; a dirt race at Knoxville Raceway took its place in 2021. The series also added a second dirt race at Bristol Motor Speedway in 2021 as a companion to the spring Cup race.

However, it would make the most sense for the Truck Series to return to one race on dirt. First, Eldora became a semi-prestigious race to win for drivers due to its distinction as the only dirt race in NASCAR’s highest divisions. With two dirt races at Bristol and Knoxville, the prestige of winning on dirt in the Truck Series has begun to slip away.

Dirt racing in the Truck Series has been destructive since 2016. From 2016 to 2019, every race at Eldora had at least nine cautions. Likewise, the two races at Bristol dirt have had 12 and nine cautions; the 2021 race at Knoxville had 14. Last year’s race at Knoxville was especially egregious, as it required quadruple overtime and 29 extra laps to finish in an event marred by a 17-truck crash on a late race restart. In addition to being detrimental to the teams’ bank accounts, excess spins and cautions ruin the flow of a race and make it a chore to sit through a plethora of pace laps.

Therefore, the Truck Series’ dirt race at Bristol should be transferred to the Xfinity Series. Xfinity is the one national series that currently does not race on dirt, and that would give each series one dirt race to which to look forward. The Truck Series should continue with its one standalone dirt race at Knoxville, but if this weekend’s race is as destructive as last year, a new dirt venue should be in consideration for the future.

Sounds like they may be reducing the schedule quite a bit for the new tv contract to feel better. Maybe maxing out down to about 30 races a year?