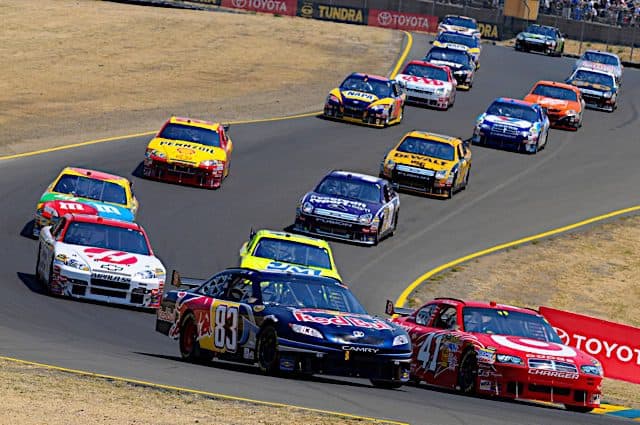 Before we get to NASCAR, I’d like to paraphrase the great Johnny Rotten of the Sex Pistols in their iconic song “Anarchy in the U.K.”:

‘Cause they’re racing in

OK, OK, I’ll stop — the original song has been stuck in my head since finishing FX’s new miniseries Pistol. But one could call it anarchy in terms of the type of track, with how different road courses are from the normal ovals and the fact that it’s just the second such layout this season; we’re nearly halfway through 2022 and Sonoma Raceway, along with Circuit of the Americas, have been the only two races featuring left and right turns so far.

It does kick off a summer stretch where the NASCAR Cup Series visits a road layout every few weeks: Road America takes place two weeks after Sonoma to kick off July, while the Indianapolis Motor Speedway road course closes out the month and Watkins Glen International is just a few weeks after that.

I already wrote about the lost art of road course ringing this year ahead of COTA, so though that seems relevant this weekend (Joey Hand and Scott Heckert the only real ringers in the field outside of AJ Allmendinger) we’ll touch on a few other aspects of making right (and left) turns.

This time, especially with the road course’s layout returning to the chute feature rather than using the standard carousel, let’s take a look at how dominance has been key despite changes to the circuit and some of the wildest moments in wine country.

Jeff Gordon truly excelled at Sonoma in the 2000s, winning three times in addition to his two wins the previous decade; his five total wine country triumphs are the most in NASCAR. Ricky Rudd scored a win, as did specialists Robby Gordon and Juan Pablo Montoya; the latter scored his first career NASCAR victory.

That’s not to say that occasional chaos doesn’t unfold during races there.

Back when Sonoma was still known as Sears Point, the 1999 Save Mart/Kragen 350 featured a pair of bizarre flips (bookending the below video) from Steve Park and Ken Schrader, both of whom skidded off the track, hit the tire barriers and ended up airborne and upside down in turn 1.

Exiting the tight U-turn of corner 11, turn 12 sends the field into a very compact restart zone between two concrete walls, close-quarter racing for everyone involved, and then opens into a more expansive first corner.

John Krebs and Derrike Cope went beyond the track limits in 1994, Krebs’ car cartwheeling over a grass berm and rolling again before crashing back down onto its wheels.

Let’s not forget Tony Stewart, who exchanged paint with Brian Vickers in 2011 before the No. 83 Red Bull Toyota punted Stewart into turn 11 and the No. 14 ended up atop the tire barriers.

Chaos at Sonoma isn’t limited to the main three series, either. West Series driver Jeff Jefferson went for a wild ride back in 2008.

Sonoma is one of those tracks where races are either incredibly calm or have things hitting the fan every few laps. In just the span of several years in the past decade, it’s featured a number of notable moments:

We’ve only seen the Next Gen car on a road course once — COTA — and that event certainly had its exciting moments, with a three-way battle for the lead in the final corners giving way to Ross Chastain‘s first career victory. Sonoma’s an entirely different animal, with the hills of dry grass kicking up an opaque plume of dust anytime a driver has an off-road excursion.

This is all without mentioning Saturday’s NASCAR Camping World Truck Series race, which marks the first time the division has been to Sonoma since 1998. The top five for that race is the ultimate throwback: winner Boris Said was trailed by Mike Bliss, Tony Raines, Joe Ruttman and Jimmy Hensley.

With all the competition in that series this year, and if the Cup season so far is any indication, dust will fly on both race days and it’ll be a wildly entertaining weekend in each of the 12 corners that Sonoma has to offer.

I don’t know why Sonoma keeps changing the layout. I prefer the carousel layout since seeing it again in 2019.