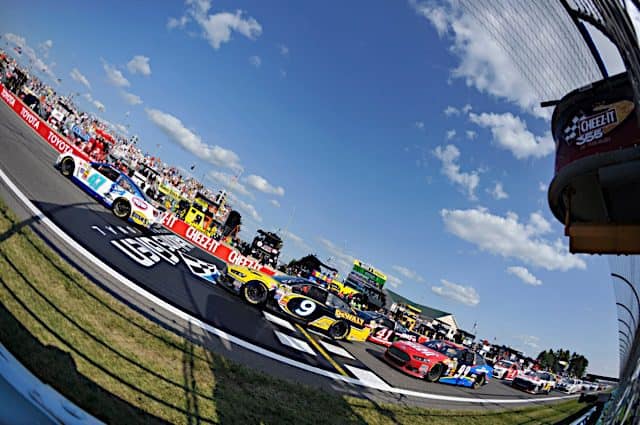 For the better part of the early 2010s, even if they weren’t standing in victory lane after the checkered flag fell, road course ringers — or even just full-time NASCAR drivers known for their right-turn prowess — were constantly in contention for wins.

Chief among them was Marcos Ambrose, who reeled off back-to-back wins at Watkins Glen International in 2011 and 2012 (the latter in arguably one of the best finishes in NASCAR Cup Series history) after stalling while leading at Sonoma Raceway in 2010.

Competing alongside Ambrose in NASCAR’s premier series was AJ Allmendinger, who began to come into his own on road courses as the 2010s began; despite often qualifying well, he didn’t break through until 2014, when it was his turn to duel Ambrose. This time, Allmendinger came out on top for his first career win. Also in the same category at the same time was Juan Pablo Montoya, who alongside Dan Gurney and Mario Andretti are the only drivers to ever win races in NASCAR Cup, the NTT IndyCar Series and Formula 1. Montoya got a couple of wins in his Cup career, both at road courses.

In fact, Ambrose, Allmendinger and Montoya made up three of the top five positions in the 2010 Heluva Good! Sour Cream Dips at the Glen.

For years, Sonoma and the Glen were the lone two road courses on the schedule … that is, until NASCAR made the decision to move Charlotte Motor Speedway’s fall race onto the ROVAL configuration in 2018. More road course additions followed soon after.

Oddly, despite the additions of road courses, there has been a palpable decrease in road course ringers, or even just full-time drivers who excel at them, in the latter half of the past decade. If nothing else, it seems that more consistent winners have begun winning the races over the Ambroses and Allmendingers, whose few shots at victories came at those twisting layouts.

Road America, where the Cup Series returned in 2021 after more than six decades away, and its list of Xfinity Series winners — without a single duplicate, I might add — might be the best example.

Allgaier ushered in a stretch of more conventional or consistent winners, with Christopher Bell, Austin Cindric and Kyle Busch following in recent years, but that streak between Sorenson and Clements features six drivers with five or fewer Xfinity wins; half of them (Piquet, McDowell and Clements) have just one.

Remember that 2010 race at Watkins Glen mentioned above where three full-time drivers, all road course specialists, made up more than half the top five? That event as a whole might be one of the best examples of a ringer-filled field.

Also in that race: Max Papis, Patrick Carpentier, Ron Fellows, Boris Said, Andy Lally and PJ Jones. More than half of Jones’ career Cup starts came at road courses, Said hasn’t raced at Cup oval since 2010 and all but one of Fellows’ 25 Cup starts have been for road races.

True, that race was smack in the middle of a two-season stint with Germain Racing for Papis, but all of his top-five finishes in the Xfinity Series were at road circuits. And yes, Lally was gearing up to drive 32 of 36 races the following season in TRG Motorsports’ No. 71, but his Xfinity career has consisted exclusively of road course appearances.

Bizarrely, races never really panned out for many of them. Perhaps it was unfamiliarity with the cars and only making occasional starts, but more often than not it seemed the ringers ended up farther down the running order than expected.

The Xfinity Series seemed to be where things swung more the ringers and specialists’ way, with Fellows (4), Said (1) and Ambrose (1) all winning at least one race in NASCAR’s second division.

After all that, things have been a bit more predictable recently — or, at least, the road course prowess has been distributed upfield.

Chase Elliott has 13 Cup wins, and seven of those were on layouts with left and right turns. He hasn’t won on an oval since the 2020 finale, claiming his two 2021 wins at Road America and Circuit of the Americas.

Hendrick Motorsports teammate Kyle Larson won two road courses as well last year, at Sonoma and Watkins Glen, but those were part of a 10-win campaign. Martin Truex Jr. factors in here as well, with three wins at Sonoma since 2013 and an additional triumph at the Glen.

The short-lived Daytona road course, only on NASCAR schedules for two seasons in 2020 and ’21, didn’t feature any specialists in victory lane. Cindric (Xfinity in ’20) might be the closest, but he was just as good on NXS ovals as he was on road courses, claimed a championship and already has a Daytona 500 win under his belt.

Road America was discussed above; as mentioned, of late the momentum has swung more towards top-tier cars rather than top-tier specialists. The ROVAL has featured Ryan Blaney, Elliott (twice) and Larson in victory lane, and the Indianapolis Motor Speedway layout was won by Chase Briscoe and Cindric in 2020 and 2021, respectively.

Circuit of the Americas is the wild card of the bunch. Last year’s Cup race was held in a monsoon, featuring a couple violent crashes as well as a rain-shortened conclusion. We legitimately don’t know how a Cup event in dry conditions will unfold in Austin, but should this weekend with mostly sunny weather projected for Sunday (March 27).

A huge and frightening hit for Cole Custer and Martin Truex Jr. at Circuit of The Americas. pic.twitter.com/dGmCoXQPx6

With COTA, though, the field this weekend feels like a ringer/specialist roster of old: along with the full-time Cindric, the field features Allmendinger, Said, Lally, Joey Hand, Loris Hezemans and Kaz Grala.

Hand is the winner of Sebring’s 12-hour race as well as the 24-hour races at Daytona and Le Mans, while Grala finished in the top 10 at the Daytona road course in his first Cup start and nearly won the Camping World Truck Series race at Canadian Tire Motorsport Park in 2017.

Hezemans is the newcomer, having made a few Xfinity starts but yet to appear in Cup competition; however, he is a two-time champion of the NASCAR Whelen Euro Series.

Allmendinger might be the only true successful specialist left; he’s won three consecutive Xfinity races at the Charlotte ROVAL, claimed his second Cup win on the Indianapolis Grand Prix layout last summer. However, of his now 10 NXS wins, nearly half of them have been on oval circuits.

In a sport where just 10 years ago teams like Richard Petty Motorsports and JTG Daugherty Racing seemed to find their best opportunities at road courses, trends have swung almost entirely the opposite direction.

None of this is a bad thing, but it’s intriguing. Maybe it’s just that an all-around set of skills is easier to adapt to, with the advent of simulators and car changes, maybe it’s the recent lack of ringers in solid equipment in the Cup Series.

You missed Scott Pruett who had a 2nd and a 3rd place finish in Cup. If you go all the way back to Riverside, Winston West regular Ray Elder won once and posted several top 10’s. AJ Foyt (the real AJ) also won at Riverside in Cup and both Unser brothers posted top 5’s. Irv Hoerr is another guy who placed either 10th (or 11th, my memory isnt what it once was) in another Cup event. Ron Fellows certainly had the most runs in one off cars. He, Boris, Scott, Gurney and the USAC guys were the serious threats of those that either took over rides or were non-regular drivers to post top 10’s.