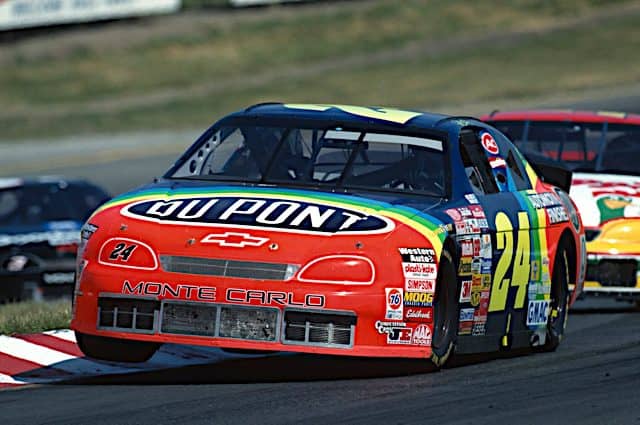 NASCAR hits the road this weekend at Sonoma Raceway, the second road course on the NASCAR Cup Series’ 2022 schedule. While the series has expanded its road-course offerings over the last couple of years, turning both left and right is still somewhat of a rarity in the oval-dominated series.

The popularity of road courses has grown in recent years (and rightfully so) and so has teams’ approach to them, especially since the Charlotte Motor Speedway infield course (sorry, Speedway Motorsports, but ROVAL isn’t a real word) was added to the playoffs, making road racing a necessary skill for drivers.

The last couple incarnations of the Cup car have been more adaptable to different tracks, eliminating the need for teams to build separate chassis for road courses, and that’s made adding them to the schedule a bit easier on race teams.

But it doesn’t make racing them easier on drivers.

For some, swinging from ovals to road courses has looked to be almost second nature, and for a select few, it looks easy.

Take Chase Elliott, the driver most would pick as the current road-course ace. Half of his 14 Cup wins to date have come on road courses, and those seven road wins are good enough already to seat him third on the all-time list of road-course wins, ahead of some of NASCAR’s biggest names.

As always, that should be taken with a grain of salt, because the Cup Series has more road races now than they did years ago, but it’s fair to say that Elliott is, at the very least, the best of today’s crop on these courses.

A look at NASCAR’s road-racing numbers is in some ways surprising and in others, not so much.

Seventeen tracks have hosted at least one Cup-level race. Not all were — or are — permanent road course facilities. Temporary courses on airfields were once fairly common, and Charlotte’s course is not permanent as it shares a facility — and part of the racing surface — with the 1.5-mile oval.

The all-time road-course king to date is no stranger to Elliott, who may very well wrest that title away. Hendrick Motorsports Vice Chairman Jeff Gordon holds the top spot with nine wins, five at Sonoma and four at Watkins Glen International, the only two road courses on the schedule during his career.

The same pair of tracks brought eight total wins to Tony Stewart, whose runner-up spot on the list could be matched by Elliott if he can drive to the win Sunday.

Behind the top three, there are four drivers with six road victories: Richard Petty, Bobby Allison, Ricky Rudd and Rusty Wallace. Here are the rest of the drivers with multiple road-course wins:

Notably absent on the multiple winners list are seven-time champions Dale Earnhardt and Jimmie Johnson. They’re among the 32 drivers with one road-course win apiece.

In Johnson’s case, the disparity in how he’s performed on them versus ovals in the NTT IndyCar Series underscores road racing as the driver’s weakest link. (Not only that, but Johnson’s spectacular crash at Watkins Glen, which happened when he was an Xfinity Series rookie over 20 years ago, still makes the highlight reels.)

Earnhardt’s win total is a little more deceiving; his top-five and top-10 finishes tell a story with a slightly different twist. He was often a top finisher, though he didn’t put up the wins to augment the top runs.

But to be fair, neither driver really had to perform on the road courses. They were barely a blip on the screen in Earnhardt’s title years, and only figured in the playoffs in Johnson’s final years. He was eliminated by the Charlotte course in its first race, but he wasn’t running at a championship pace before that, either.

There are Cup champions without a single road victory, including Hall of Famer Dale Jarrett.

Drivers today certainly can compete for a title without a road win, but with more on the schedule, they can’t tank repeatedly, either.

See also
Did You Notice?: A 2022 NASCAR Season Defined by Near Misses

Over the years, some teams, particularly those in need of a strong finish, have employed road specialists in either their primary car, replacing the regular driver, or in a second car. But other than Gurney, it hasn’t been wildly successful at the Cup level because while the skill is there, the team and driver don’t have the chemistry of a longer-standing relationship, and communication in teams takes time to develop.

Looking beyond wins, some other numbers are also revealing of road talent.

Interestingly enough, Earnhardt, Martin and Gordon all posted their 20 top fives in 47 races.

Petty had the most road races on this group with 61; Earnhardt, Martin and Gordon had the least at 47.

But there’s a pattern here. With the exception of Earnhardt’s lack of multiple wins, this group emerges as road-racing elite. Elliott simply doesn’t have the starts to compare yet.

A top-10 average in 20 or more starts is definitely impressive. But the more races a driver runs, the harder it becomes to maintain that average. Martin is the best among drivers with 40 or more starts at a still very impressive 10.2. Gordon’s 13.0 average is certainly nothing to sniff at, nor is Petty’s 14.0. Average finish is Johnson’s strongest road stat as well at 14.2. The number of races here matters more, but the stat is still important as it does reflect performance over time — and shows how difficult that is to maintain.

Will Elliott become the all-time road-course win leader in the next couple of years? It certainly seems likely, though certainly not easy. In an era where road racing is a larger part of the season, drivers have more opportunities to pad their resumes … if they’re good enough at those right-handers.

Interesting read. The average finish stats will probably be the only thing that will be comparable in the long run, given the number of road courses on the schedule today.