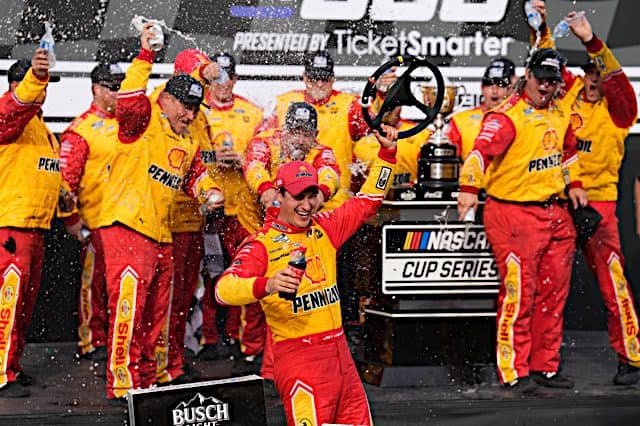 Logano’s win marked the third time in the last two seasons that he has won an inaugural NASCAR Cup Series race at a new track.

How did it happen?

In a two-lap shootout featuring slide jobs that would make even a dirt-track lover blush.

On a restart with 50 laps to go, Kyle Busch took the lead from Erik Jones after the latter had taken only two tires during a pit stop under caution. When the Candyman took the lead from the Petty GMS Racing driver, all he had to do was keep running his line and pray for a green-flag race until the end.

A green-flag race he did not get.

On lap 202 came an incident involving Ricky Stenhouse Jr., who spun by himself on the backstretch on the exit of turn 2.

The yellow flag delay allowed Logano to close in on the Joe Gibbs Racing driver within pouncing distance upon the restart. It was an opportunity the Team Penske driver did not let escape.

Then another caution flag flew for Cole Custer, which allowed Rowdy to strike back with a banger of a restart to re-inherit the lead from the Connecticut native.

With only five laps to go, Kyle Busch felt the No. 22 breathing down his neck, inching closer and closer with each lap that had passed. However, Logano, with clean air favoring leader Kyle Busch, found himself at a disadvantage despite seemingly running the faster line.

But one more screwball flew in the 300-mile event in the form of Kevin Harvick‘s brake rotor exploding while entering turn 3, resulting in one more yellow flag and one more restart.

Logano answered promptly with a banger restart of his own and beating Kyle Busch from his inside before drifting to his middle and eventually landing to his outside while exiting turn 2.

Kyle Busch answered with a dive bomb of his own when entering turn 3 followed by Logano mirroring Kyle Busch’s crossover for his own.

However, as if the final two laps didn’t already look like a dirt race enough, the Toyota driver slid sideways coming off turn 4 and was unable to carry his speed enough to challenge Logano again, and that was all she wrote in St. Louis.

Ross Chastain finished eighth on Sunday, but that certainly doesn’t tell the whole tale of his ventures at Gateway.

On lap 66, both Chastain and Denny Hamlin were battling for the fifth spot. It was a fight between the two that lasted for a while in the first stage of the race, but it came to a head when the two entered turn 1.

Chastain, either frustrated or simply mistaken, ran the corner hard in the rear bumper of the No. 11 Toyota. The contact sent Hamlin into the outside wall, damaging the toe link of the Joe Gibbs Racing driver and effectively taking him out of contention for the rest of the day.

"Denny is not gonna be happy about that." 👀

And, well, he was right.

Can confirm: Hamlin is not happy with Ross Chastain https://t.co/u9MWVk4SUM pic.twitter.com/Do223qdZL6

Now, having one NASCAR Cup Series veteran mad at you and hunting you for an entire race is bad enough, but having two? That’s having your day go from bad to worse.

"I mean, what was [Chastain] doing? He ran me over getting into [Turn] 3 and then ran me over again."- Chase Elliott https://t.co/R4rtxNmc9L pic.twitter.com/tOUUL069YG

If there is a silver lining to the Melon Man’s escapades, however, it’s likely his culmination of a new bond between Hamlin and Elliott – who don’t have a wonderful history between each other themselves – against himself.

In the end, the Team Trackhouse Racing driver apologized for it all, owning the mistakes he made that cost two Cup drivers a chance at having a solid finish.

However, if Hamlin’s interview is to be believed, there’s likely still more retaliation on the way.

"We all have learned the hard way … [Chastain] will be no different."- Denny Hamlin https://t.co/b2cycDf4X5 pic.twitter.com/xh4aUJglAV

While Chastain’s misadventures were the story of the day, it shouldn’t be allowed to overshadow a very successful weekend for Kaulig Racing’s AJ Allmendinger.

Less than 24 hours before the green flag of the 300-miler at Gateway in Illinois, Allmendinger was winning his second NASCAR Xfinity race of the season over 2,000 miles away at Portland International Raceway in Oregon.

Allmendinger, who arrived at the track at 2 a.m. local time on Sunday, sat outside of the top 10 for most of the day. However, by the end, the Californian that had won at Oregon less than a day earlier endured and triumphed his way into a 10th-place result in Illinois – his first top 10 result on an oval in the Cup Series since Talladega Superspeedway in 2018.

Oh, yeah, and he did it at a track he had never raced at in his life.

How about @AJDinger this weekend?!

Flew in from winning at @portlandraceway late last night and then earns a top-10 a track he’s had exactly ZERO laps of experience at in his CAREER… in any series! 😲#EnjoyIllinois300 pic.twitter.com/ycRWjy7HkN

Yet, in the end, it practically amounted to nothing.

On lap 97, while under caution, McDowell stayed out to inherit the lead and try to keep some track position while on old tires. After all, tires didn’t seem to be a factor thus far, and it seemed far better than where he was running before.

But not only did McDowell keep some track position, he kept all of it.

McDowell stayed in the lead for 34 laps before a caution flag flew in the waning moments of stage two. He and his team, with a real possibility of staying in contention long enough to maybe even win, decided to pit rather than collect more stage points.

Yet, McDowell and the Front Row Motorsports team never did rally back.

While that sounds harsh to a team like Front Row Motorsports, which has only three wins in its almost 20-year existence, keep in mind that 2022 has been good for the team thus far.

They aren’t contending for wins every weekend, but with five top 10s already, which ties the most in a season for McDowell from one year ago, it shows that FRM is having improvement with the Next Gen car.

But was the speed the result of hard work and investment on a new car? Or was it simply the track position itself?

I am bummed how we finished today but the positives are we are closing in on it. Our @Team_FRM @WISE_FAST_EV team has speed and we just need to clean up a few things and we will be challenging. Led a lot laps today and we were a legit Top-10 car again. Big race coming @RaceSonoma

What did this race prove?

Tires don’t seem to matter much at Gateway.

However, tires also seem to matter a lot at Gateway.

On Sunday, there were 12 changes for the lead. Five of them were under caution after pit stops. Five others were immediately after a restart.

Only two occurred after one lap of green-flag racing.

Clean air ruled the day at Gateway with tire fall off not being a factor for most of Sunday. Tires were not fading as fast as they do at other venues, resulting in slower lap times allowing cars with fresher tires to gain an advantage. It effectively threw strategy plays for tires out of the window.

However, there were two instances where tires fell off completely. Both of them were for the leader of the race.

Blaney goes around and into the wall after a left-rear issue. Not much damage, though. https://t.co/ejrJTgfeac pic.twitter.com/1WRvlcE5fZ

A tire issue for Chase Briscoe in Stage 1 at Gateway (after starting on the pole): https://t.co/YUXhyppEUG pic.twitter.com/9E5ogULucC

It’s no secret the Next Gen car has been having growing pains with tires throughout the year, and Goodyear has explained to teams to use the brand’s recommended air pressure adjustments in order to keep the blowouts from reoccurring.

Yet, in the end, teams simply will do what it takes to win. Even if it runs the risk of suddenly ending their days.

Paint scheme of the race

He may have made some new friends today for better or for worse, but at least Elliott’s car looked good while doing it.

Hooters has been in the NASCAR sponsorship arena for many years and Elliott has seen the brand on his car many times over the last few years during his tenure in the Cup Series.

However, the 2022 version of this sponsorship has probably never looked better. The white base color featuring orange secondaries was one of the best looking of the field even if it was one of the simplest.

But sometimes, simple is better.

Now would it kill the guy to smile?

Hi Chase Elliott I'm sorry your job comes with so many painstaking and undesirable duties https://t.co/eLwW0Ua342

An even more appropriate question – was it worth it?

With an inaugural event being introduced in this day and age in Cup, it means another racing venue must lose a date. This time, it meant the loss of the dual race weekend at Pocono Raceway.

Pocono has not been an anticipated race for years, meaning justification for the loss of one of its dates was not something many race fans were demanding out of Gateway’s performance.

But that doesn’t mean we can compare the two side-by-side. That simply wouldn’t be fair.

With clean air and track position seemingly being a key factor in the race for the lead, tires weren’t as important as they are at other – and similar – racetracks like Richmond Raceway. Plus, it seemed once the leader cleared second on a restart, clean air would carry them to either the stage win or at least into the next caution.

That’s a bit of a bummer, and it manifested flashbacks of the days of the 550-horsepower package.

Yet, there were still nine different leaders and 12 lead changes, plus one pretty exciting duel for the lead in the closing laps of the race.

My take from the grandstands today:

But the primary reason it turned into a good race is because of what happened as a result of passing being hard.

The duel between Logano and Kyle Busch before the final caution was intense.#NASCAR

No, the question marks weren’t as big as the ones we had one year ago for all the other inaugural races, but it still left many questions open.

How would the Next Gen car react to a (mostly) flat racing surface on this 1.25-mile oval track? Would it produce a race worthy of the NASCAR Cup Series? And for the NASCAR big wigs – would it excite fans enough to want to come back again?

Well, I’ll leave it up to your interpretation for those first few questions, but as for the last one, I think NASCAR got its answer loud and, well, very loud.

What are amazing day! They came early, stayed late and made noise from start to finish. I love these new venues. pic.twitter.com/0EXOJ3znvu

The NASCAR Cup Series travels to Sonoma Raceway for its second road-course race of the season. Cup qualifying begins on Saturday, June 11 at 5:30 p.m. ET with the Toyota/Save Mart 350 being televised live on FOX Sports 1 on Sunday, June 12 at 4 p.m. ET.