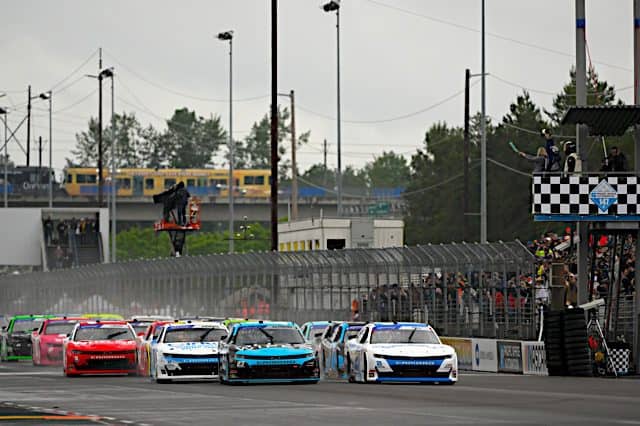 Well, that was interesting. AJ Allmendinger took home the win in the NASCAR Xfinity Series’ Pacific Office Automation 147 at Portland International Raceway yesterday amidst the most chaotic race so far this season. The Pacific Northwest rain was unrelenting and made the track surface as slick as glass in some sections. Naturally, this led to plenty of chaos.

Myatt Snider, Austin Hill, Josh Berry and Justin Allgaier rounded out the rest of the top five. Yes, you read that right, Myatt Snider delivered the first top-five finish of the season for Jordan Anderson Racing. This race was absolutely wacky from start to finish, more so than any other rain race and arguably even Circuit of the Americas earlier this season.

You would think nobody would be surprised to see Allmendinger taking the win at any road course, but that wasn’t the case yesterday. After venturing so far off track one would think he had four-wheel drive before the race even started, Allmendinger found himself a lap down early on in stage one. The veteran struggled all throughout the stage, which Ty Gibbs ultimately won.

That fact alone is impressive enough, but what I find most impressive is that Allmendinger only had to lead six laps to earn his second win of the season. It just goes to show that if you’re leading when it counts, that’s all that matters.

Jordan Anderson Racing’s aforementioned highest finish of the season is, so far at least, the crowning jewel in a growing list of achievements for the up-start team out of Statesville, N.C. The second-place finish marked their fourth top 10 of the season and second in a row. Snider has proven all year long that he has the ability to drive the wheels off any car, and finishing second to Allmendinger at a road course is nothing to stick your nose up at.

Snider is currently in 18th place in the points standings, with Sheldon Creed, who had a horrible finish today (32nd), leading him by 25 points. If Snider can keep stringing together good races, he might have a chance at an under-the-radar playoff run, especially if he can pull out a win.

Oddly, Ty Gibbs falls into this category despite his early dominance. Gibbs had one bad-fast ride, even in the rain. He won the first stage by an unbelievable over-14-second margin and had a real chance to do some damage yesterday, a shot at stealing a road-course win away from the Kaulig Racing boys, which would undoubtedly have made the team owner and his grandfather Joe Gibbs quite the happy customer.

However, a crash with Jesse Iwuji under caution and an incident with none other than Creed cost Gibbs his chance at what could have been a fantastic day at the office. Even though he still managed to bring the car home in seventh place, you’ve got to think Gibbs wanted, and maybe even deserved, more out of the drive he had today than a finish in the back half of the top 10.

Oh yeah, speaking of Sheldon Creed, he did indeed flip the double bird to Jade Buford, and it was hilarious – so much so that they’re going to share a spot on this week’s “Losers” list. Creed needed points very badly, as Richard Childress Racing is plenty well-equipped to be competing for wins consistently.

Buford is still trying to prove himself as someone that warrants a full-time ride. The two were coming into the tight left-hander of turn 1, which had given plenty of drivers headaches all race long. The sharp corner forced some drivers to lock up their brakes and miss the turn altogether on nearly every lap, ensuing in a stop-and-go penalty for missing it.

Buford, Creed and some others missed the corner after cars went four-wide on a restart, and Creed decided to serve his stop and go as soon as he could. Buford, however, had other plans. He wished to serve his penalty towards the far end of the corner, which just so happened to be in front of Creed. Buford brake-checked the Xfinity Series rookie, sending the nose of Creed’s No. 2 chevy plowing into the rear of Buford.

Obviously, Creed wasn’t too happy about these developments, so he decided to let Buford know in the most fitting way possible.

sheldon creed is probably displeased with jade buford but who’s to say pic.twitter.com/3E5Gvp1ZDp

This one was absolutely, unquestionably no contest. Jeb Burton donned a paint scheme honoring Robb Elementary – the school where a recent shooting took place in Uvalde, Texas. Usually, I try and keep this section about well-put-together body lines and wrap packages, but yesterday’s scheme was different. It stood for something much bigger than you or I. Either way, I’ll promptly shut up so you can look at this masterpiece of a racecar.

NEWS: @JebBurtonRacing to carry colors of Robb Elementary School this weekend at @portlandraceway as Our Motorsports & @LarrysHLemonade look to raise funds for those impacted by last week’s tragedy.

All this week did in terms of wins was exactly what everyone predicted. Allmendinger is up to two wins on the season, with both coming at road courses. Gibbs still leads all racers with three total victories this year. Berry and Noah Gragson are the lone racers with a pair of wins during the ’22 season, while Austin Hill, Brandon Jones and Allgaier all have single triumphs.

Iwuji continues to have consistent appearances in the No. 34 car, but if I were NASCAR, he would have been parked long before now. I understand helping our former service members, but at what point does he become more dangerous than anything else? At this point, I’m fine with letting him sing every single national anthem from here until Phoenix – whatever it takes to get him off that tractor.

If you thought waiting a week without any Xfinity Series racing was on was hard, you’re going to have to try this one on for size. The Xfinity circuit looks to take the Nashville Superspeedway on yet again on June 25 at 3:30 p.m. ET. Kyle Busch won the last race in Nashville, and with him out out of the picture, things are a bit more wide-open. It could spell disaster or it could give us another look at another playoff driver. The race will be aired on USA Network and the Motor Racing Network.

Re-watch the tape. Creed was mad at Buford (48) for initially turning him in the wreck. It was Labbe (36) that was doing the mandatory stop and go when Creed hit him and destroyed the nose of his car.

THIRTY-FIVE laps under caution in a SEVENTY-FIVE lap EVENT. NA$CAR has to get away from road courses except for Watkins Glen. To quote from a movie, “It’s the Pacific Northwest. It rains every forty-five minutes.”