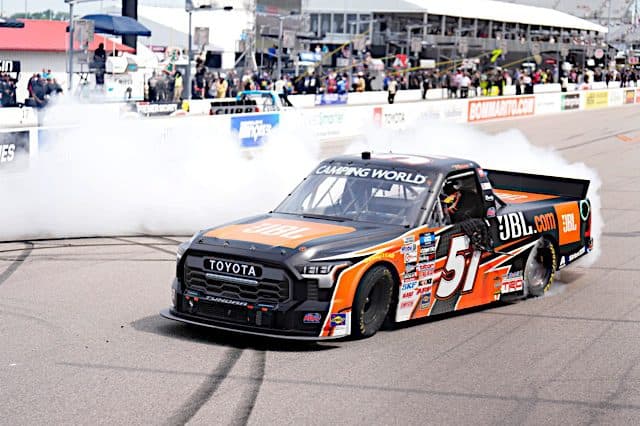 He grabbed his second win of the year after taking the lead from Christian Eckes in overtime.

“Yeah, I can’t believe I got the bottom right there, that’s unbelievable,” Heim told FOX Sports after the race. “Great push by my teammate Chandler Smith right there. All the dedication to my team these past couple of weeks has been everything. I’ve been putting so much time and effort in to try to improve my craft. … Man, I’m out of breath now, that was awesome.”

“Anytime we can get the extra seat time is super important, I feel like I’m being better every week,” Heim said about testing at Gateway.

A big wreck on the last lap forced the race to end under caution. Carson Hocevar spun around in traffic and Tyler Hill slammed into the side of his truck. Hocevar was put on a stretcher after he got out of the truck.

Carson Hocevar gives a thumbs up after this huge hit on the final lap at Gateway. https://t.co/puyiGPAyoj pic.twitter.com/2aKZffGvrh

Hocevar was later transported to a local hospital for further evaluation.

The race opened up relatively calm, except for a stack up at the start that caused some front end damage further in the pack. Stage one went caution free and Chandler Smith took the victory over his Kyle Busch Motorsports teammates Heim and John Hunter Nemechek.

Stage two, however, was when the wheels started falling off the wagon. The first caution for an incident came when Ty Majeski went below Taylor Gray and tagged him, sending him around and into the wall. Caruth, in his first Truck start, came in hot behind Gray and also skidded around, though no harm was done.

Then a bigger crash occurred with about 16 laps left in stage two. Nemechek attempted to go three wide on the bottom below Friesen and Heim and ended up spinning around on his own. Some other trucks were also collected in the crash, including Majeski, Jesse Little and Colby Howard.

The damage to the No. 4 truck was too severe, and he retired from the race.

Then, a battle for the lead went awry: Grant Enfinger dove underneath Chandler Smith and spun them both around and into the wall. Smith was not happy with Enfinger after the crash.

A mixture of pit strategies set the field to start stage three, as Hailie Deegan stayed out while many others pitted. Carson Hocevar and Zane Smith fought for the lead, with Smith going to the point. Eckes also joined the top five, moving in to second over Hocevar.

But on lap 94, the caution flag waved once again for Kris Wright, who crashed into the outside wall and sustained heavy rear-end damage.

Hocevar’s team called for fuel only so he could have another set of stickers for later. Also during this round of stops, Caruth, who made his way into the top six, sped on pit road and restarted at the tail end of the field.

Since other trucks had fresher tires than the No. 42, Hocevar started to fall back a bit. Zane Smith made some contact with Hocevar and cut a right-side tire. He missed pit road the first time around and dropped down in the field.

Hocevar’s pit strategy wasn’t the best, as he ended up going around and through the grass, bringing out the caution again.

Back at the front, Rhodes moved into first place once again with less than 50 laps left. But yet another yellow flag waved for Howard, who got loose on the bottom and rear-ended the outside wall.

Though Rhodes regained the lead, he fought a tight truck and lost the lead easily to Derek Kraus. Then in the closing laps, Eckes passed Kraus for first before the caution came out again for Tanner Gray with three laps left.

In the end, Heim got some help from his teammate to get to the lead and take the checkered flag.

Next on the docket is some road course racing at Sonoma Raceway. Television coverage for the DoorDash 250 starts on Saturday, June 11 at 7:30 p.m. ET on FOX Sports 1.