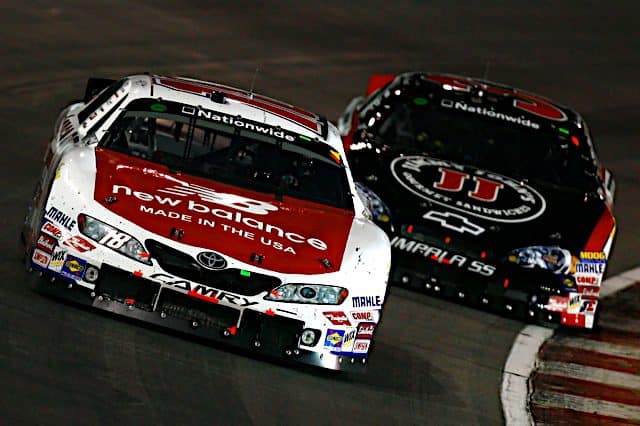 It’s time for another first for the NASCAR Cup Series, as the sport’s premier division heads to World Wide Technology Raceway at Gateway for its first-ever race at the track.

And, to paraphrase Tom Cruise’s character Pete “Maverick” Mitchell in the original 1986 Top Gun, Cup is feeling the need for speed this weekend (the quote isn’t replicated in the legacy sequel Top Gun: Maverick, but I also cannot emphasize how phenomenal the film is).

Both Cup and the NASCAR Camping World Truck Series take to the lightly banked, 1.25-mile Illinois speedway this weekend. Trucks returned to its surface in 2014 after a several-year hiatus, having raced there from 1998-2010.

The Xfinity Series, meanwhile, is where a number of current Cup drivers have gotten experience at Gateway, with the series competing there from 1997-2010. That first 2010 race, the penultimate at Gateway for Xfinity to date, is its most infamous, with the Carl Edwards-Brad Keselowski feud coming to a head as the two made contact while battling for the win on the last lap.

Keselowski led out of the final corner, but Edwards’ No. 60 hooked the No. 22 and sent it into the outside wall. Edwards sailed under the checkered, claiming the win while Keselowski hit the inside wall and was clobbered by Shelby Howard’s No. 70.

There’s four active Cup drivers who scored Xfinity wins, including two-time winner Kevin Harvick with his back-to-back victories in 2000 and 2001. Keselowski rebounded from that first ’10 event to win the second, while Martin Truex Jr. and Kyle Busch also both have a triumph there.

See also
Fire on Fridays: Is Anyone Really a Favorite at Gateway?

Let’s break down some stats, ordered by experience at the track regardless of series. A whopping 24 of 36 Cup drivers have raced at Gateway — good for two-thirds of the field — while nine have won, a quarter of the premier series’ pilots.

Brad Keselowski: Possesses the most starts of any driver at Gateway, with nine (six in trucks, three in Xfinity). Keselowski has an average finish of 10.67 with one win, which came in the final Xfinity race at the track.

Kevin Harvick: The 2014 Cup champion has eight starts (three truck, five NXS) and three wins across the two series. Along with the back-to-back Xfinity wins just after the turn of the century, Harvick also won from the Truck pole in 2010. Still looking for his first Cup win in 2022, Harvick has a 9.88 mean result in Illinois.

Todd Gilliland: Probably didn’t expect to see Todd Gilliland here, right? He has five starts, all in trucks, and the results didn’t get off to the best start with a 21st in 2017. He bounced back with two consecutive runner-up finishes, but rocky races in 2020 and 2021 (24th and 29th, respectively) dropped his average finish to 15.6.

Three starts: Just three drivers in the Cup field have more than a trio of appearances at Gateway in a single series. A grand total of seven drivers have three races’ worth of experience there, led by Kyle Busch with Xfinity results of fifth, eighth and first, good for an average finish of 4.67.

Also averaging results within the top 10 (both at 7.3) are Aric Almirola and Custer, the former never finishing outside the top 10 in Truck Series competition at Gateway. Custer, meanwhile, has just two truck wins in total; his second and final division triumph came there in 2015.

Justin Haley‘s 2018 truck win there boosted his average finish to 10.67 over three starts. Erik Jones and Tyler Reddick had a single solid result within struggles at Gateway, while Ricky Stenhouse Jr.‘s ninth-place effort in the first 2010 race is his best to date there among a pair of struggle-filled runs; his average finish sits at 20.67.

Two starts: Despite also recording a 26th at Gateway a year later, Truex won in 2004 en route to his first of two consecutive Xfinity — then Busch — Series titles. Still on the hunt for his first win of 2022, Truex has a 13.5 average finish across two very different results.

Denny Hamlin, exiting Charlotte with his second win of the year, has an impressive average finish of 7.0 despite just two starts, finishing 11th and third. Joe Gibbs Racing teammate Bell makes it nine total starts across the four-car Toyota stable with a pair of his own, winning in 2016 and backing that up with a sixth the next year.

Chastain’s 2019 Truck Series win was the second ever for Niece Motorsports and himself as well, boosting his average result to 15.0 after finishing 29th a year prior.

Michael McDowell, meanwhile, is hoping for a turnaround to 32nd- and 30th-place results in 2009 and 2010, respectively. His average finish at Gateway tallies up to a 31.0.

See also
Chris Buescher Out at Gateway Due to COVID-19, Zane Smith Subbing

Notable one-off results: Kurt Busch, William Byron, Austin Cindric and Harrison Burton have all made one start at Gateway, though over a 20-year span (Busch in 2000 to Burton in 2019) and none with any results to write home about. Busch finished 21st, Byron 17th and Burton 16th, with Cindric leading the quartet with 11th.

However, five current Cup drivers have single appearances at the track yet all recorded a finish of at least seventh or better in said races. Joey Logano has the lone Xfinity start among these five, starting fourth and finishing second in 2008. The other four were all in truck competition, with Austin Dillon and Ryan Blaney finishing seventh in 2010 and 2014, respectively. Chase Briscoe, a winner already this season, led 88 laps yet came home second to John Hunter Nemechek in 2017.

The driver with exactly one appearance and one win at Gateway? Bubba Wallace. His and Blaney’s lone Gateway starts were in the same race in 2014, with Wallace leading more than half the race (85 of 160 laps) en route to his second career Truck Series victory and first of four in that season.

Do you think bubba’s win in a truck 8 years is going to help him in Cup. Quit smoking that stuff, we are talking about bubba lololol