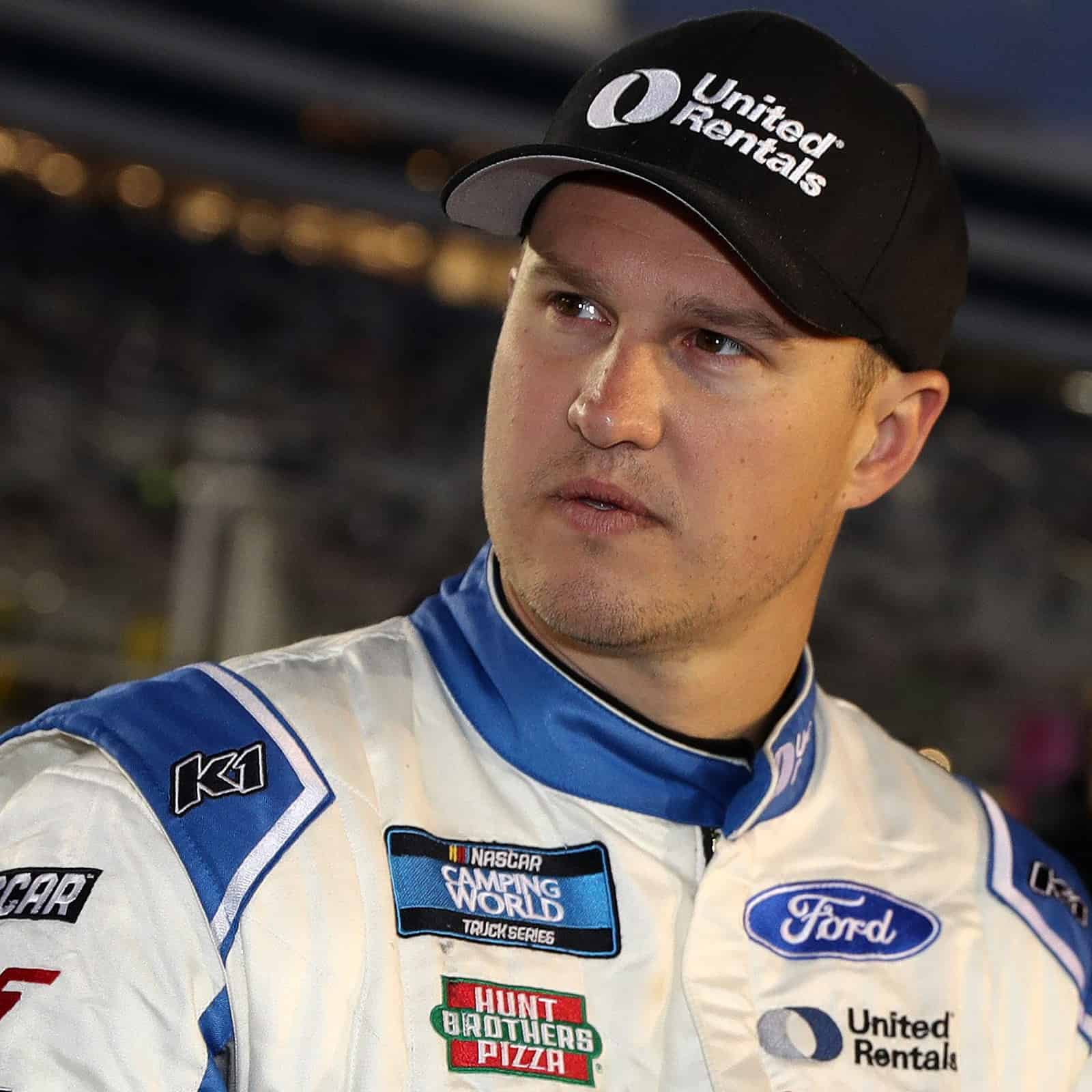 Racers are very passionate individuals. They put so much time and effort into their profession and it takes a lot of success and fortune to get to the top ranks in NASCAR. That’s why it is likely a driver will say something in frustration when things don’t go well. It happened on Friday night (May 27) in the NASCAR Camping World Truck Series race at Charlotte Motor Speedway.

If you missed it, Carson Hocevar was leading late until a caution came out. On the ensuing restart, Hocevar lined up next to veteran racer Ryan Preece. As the pack shot down into turn 3 Hocevar lost control of his truck and slid into Preece, causing both to wreck ending their day.

Preece was none too pleased with the incident and let the audience watching on TV know about it.

"All you kids watching right now wanting to get to this level … don't do that. Race with respect."

A very frustrated Ryan Preece after the late crash with Carson Hocevar at Charlotte: pic.twitter.com/w9WaYI4a8l

Preece’s comments received a lot of attention both positive and negative. So where do our writers stand? Anthony Damcott and Michael Nebbia debate whether or not Preece’s comments went too far.

Would You Have Reacted Differently?

It’s easy to say that Preece’s comments are out of line, but put yourself in his shoes for a second.

You are a driver who is racing for your career, and every start you make that you don’t finish well in, draws less than positive attention from sponsors and race teams.  So, you get wrecked from the lead and you finish outside the top 10 because of it.

Sponsors are going to focus more on just the result than the reason for the result.  Now you’re worried that your career could be in jeopardy because of poor results out of your control. You haven’t spoken to the other driver involved yet, but the media shoves a microphone in your face before you have time to calm down. Would you have said anything different if you were in Preece’s situation?

The reality is, almost any driver in that position would make comments similar to what Preece made on May 27.  Taking away the fact that he is trying to race for his career, he had a shot at winning his second-ever Truck Series race and as far as he knew from the driver’s seat, he got put in the wall off of turn 2 and then got flat out wrecked in turn 3.  It doesn’t matter who the driver is on the bottom that wrecked him, he has a right to be upset.

Preece’s comments are only perceived as “out of line” because Hocevar has gained a supporting fanbase, and there are few people in the garage area who aren’t rooting for him to finally get that first career win. If Matt Crafton, Grant Enfinger, or even John Hunter Nemechek was in Hocevar’s position, Preece’s comments would have probably been perceived as justified, and there would be calls for the veteran driver to “retire” or “go back to (insert racing series here).”  But because Hocevar was the driver involved, fans sided with Hocevar because of how close he was to winning his first race.

Now don’t get me wrong, there is nothing wrong with supporting Hocevar in this situation, but people need to be understanding of why Preece was upset. Even though Hocevar hasn’t won this season, he is a 19-year-old that is full-time with Niece Motorsports for at least the rest of this season, and he has the talent to compete for the championship this season. Preece has no such opportunity, and although he is a reserve driver for Stewart-Haas Racing, he needs to treat every race as if it’s his last opportunity behind the wheel.

Although Preece is still young – he’s only 31 – his part-time schedule in all three series means he doesn’t have many chances to win races and finish well.  And, unlike Hocevar, he needs to impress every single time he hits the track if he wants a chance to return to the top echelon of NASCAR.

Every year that Preece doesn’t have a full-time ride is another year taken away from any sort of “prolonged” career that he could have in a full-time ride. Hocevar’s ride is secure for at least the rest of this season, and even if he is released from Niece, he has proven that he has the skill to run in a top-tier truck, given that he has outperformed in his No. 42 week in and week out.

Don’t forget that Hocevar also took responsibility for the accident, saying that it was a “dumbass move on my part.” If you dumb Preece’s comments down, he basically agrees that it was a poor move, he just said it a little more angrily than Hocevar did. I don’t think agreeing with someone who literally said it was a poor move equates to “out of line” comments.  No driver has to accept the reason for a wreck, but Preece, in essence, accepted the reason that Hocevar gave for the accident.

Preece is a talented driver who hasn’t finished outside the top 10 in any of his Truck Series starts (except for the Charlotte race, and even then, he finished 11th), and he’s won twice in the Xfinity Series, back when he was with Joe Gibbs Racing.  He is even a reserve driver for SHR, leading people to believe he’ll take over the Cup Series ride for either Aric Almirola or Kevin Harvick.

Speaking of Harvick, Preece is a client of Kevin Harvick Incorporated, so some of his sponsors are also Harvick’s sponsors (namely Hunt Brothers Pizza). And yet he still feels like he needs to go out and race every race like he won’t get another chance.

It’s easy to look at a situation like this and take a side, but it’s also important to understand the other side. Hocevar might be the winner of the court of public opinion, but this shouldn’t automatically mean that Preece’s comments were in the wrong, or, as it has been put, “out of line.” – Anthony Damcott

Preece Started It and Then Overreacted

I seriously think Preece was way out of line with his comments after the Truck race in Charlotte. I have seen the replays of the wreck and if you look closely, Preece started the incident. Sure, the wreck finished in turns 3 and 4 but it began in turn 1 when Preece made contact with the left front of Hocevar which appeared to cut the left front tire. How can you expect Hocevar to hold onto a truck with that going on?

Maybe Preece should have ran Hocevar, who was the leader for the majority of the race, with a little more respect.

Ross Chastain tried to help the cause, but it only exacerbated the issue and ended up wrecking Hocevar. With all that going on it was out of Hocevar’s hands and it was a racing deal. With as much racing as Preece has done in his career, he should know that. It wasn’t like Hocevar intentionally tried to wreck him and others going for a victory. How many times have we’ve seen that in recent years? If he did that, I could totally understand Preece’s frustration and I could totally understand his comments after the race. But it was a mistake. I’ve seen Preece make mistakes before; look at Sunday’s Cup Series race! You didn’t see Chris Buescher calling him out for getting involved in his mess. That’s how it should be done!

Speaking of getting turned, I am sure that will happen to Preece at some point. He still has two Truck Series races on his schedule and Hocevar will be in both of them. You don’t think he’s upset about what happened? And Hocevar should be. Then Preece will look back at this incident as an overeaction and he will regret his decision. – Michael Nebbia

I’m just glad the new Cup cars no longer spin out as easily as these trucks and Xfinity cars when someone takes the air off their right side.

Last edited 7 months ago by Sandeep
0
0

You can be critical without being pissy. I wonder that Preece never made a bad decision in his early career. It tends to stink of sour grapes a bit, and I’m not sure it endears him to future sponsors.

With the connection he has to Kevin Harvick, I doubt he has to worry about not ever having a ride.

Its a problem with how young drivers are being brought up. The youth movement is being forced by sponsors hungry for the 18 to 49 year audience who want entertainment above sport. You need youthful people in the sport to attract them. With parity comes an absence of Superstars to love or hate. Once Kyle Busch and Hamlin are gone…what’s left? The young stars don’t win races in bunches because of the ‘parity’ (or is that ‘parody). Its become more amusement part ride than sport. For the guys in their 30’s, they were brought up differently. When race after race a kid half your age drives in over his head because he’s be taught “if you ain’t first, you’re last” what the <heck> do you expect?

What’s left !!! That’s easy, How about Larson, Chase, and Byron and that’s just on one team. And none of them are 30 yet. I’m not going to miss Hamlin a nano second.

Hosevar has caused wrecks in everything he has ever driven, not a good shoe at all just has money to get in the rides, there’s a lot better than him still in super late models

PREECE forgets two things. 1/ he is only a guest in the truck series and 2/ these trtuck series drivers are racing for money also and a championship. I’m sure the way Nascar is now, theses drivers must do good or they are out of a ride =no pay.