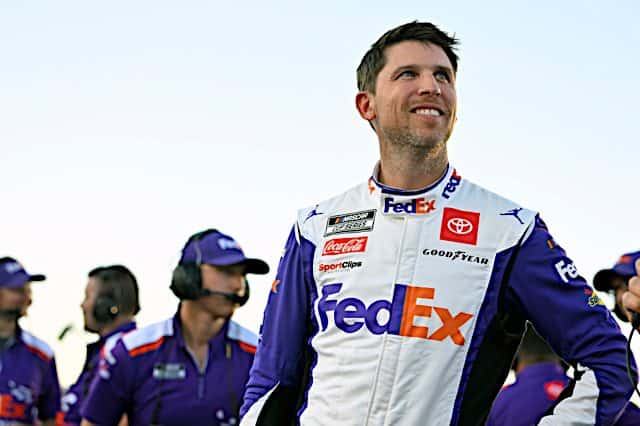 Denny Hamlin spent much of the night keeping his nose fairly clean and surviving what will go down in the record books as the longest race in NASCAR history.

In what became the final round of pit stops, Hamlin went against many of the leaders and took four tires. Those tires allowed the Virginian to zoom through the depleted field of cars and to the lead after a four wide pass on the frontstretch, as the other three cars wrecked to bring out the final caution.

Hamlin was then able to hold off Kyle Busch in the final restart to win the race, getting the final jewel in his crown jewel belt. The almost certain future Hall of Fame inductee has won multiple times in the Southern 500 and the Daytona 500 but has never been able to capture the Coca-Cola 600 until Sunday night (May 29). Hamlin now joins an elite club of drivers to have won all three in their career (some also include the Brickyard 400 in the crown jewel races).

One of those drivers in that club is Kevin Harvick. It was an eventful night for the Bakersfield, California native, after being involved in two incidents that brought out cautions. In spite of that, the veteran was able to put his head down and end up third at the finish. In a race that can best be described as a war, the top three drivers all ended up being veterans with over 15 years of full-time experience at the Cup Series level. Youthful exuberance is a strong trait to have, but experience ended up being the key to succeeding in this race.

Neither car won, but it’s clear that Trackhouse Racing Team has arrived in the Cup Series.

Daniel Suarez did not finish the race, but Ross Chastain won stage three and looked like the clear-cut favorite for much of the second half of the race. Chastain led 153 laps, but something happened mid-way through the fourth and final stage and the watermelon farmer was unable to get back up front after being passed for the lead for the final time on lap 353. After getting a surprise late race caution, Chastain battled for the lead before being involved in the final wreck on the outside of that four wide crash. Chastain stayed out under caution, but was then passed by all but one of the remaining lead lap cars to finish 15th with major crash damage.

Even still, the organization led a total of 189 laps on the night and spent chunks of the race battling amongst themselves for the lead. With most of the Hendrick cars having early exits, they were the workhorse of the Chevrolet stable and Chastain gained 33 points on points leader Chase Elliott, shortening the gap between the two into just 34 points heading into the dog days of summer.

Hamlin won the race from the pole. The 600 has become a strange parameter for wins from the pole, as what should be a fairly rare accomplishment has now happened five times in the last eight years.

Kyle Larson had two penalties early in the race for removing equipment, had a loose tire penalty, had a small fire in the pit box and spun out on lap 165 to cause a caution. Larson spent the second half of the race slowly gaining momentum before finally bursting through and taking the lead from Chastain midway through the final stage. Larson was leading when a late race caution forced him to take only two tires on the final pit stop, then was forced into turning Austin Dillon due to Chastain crowding him up on his outside. Larson’s expedition ended with him finishing ninth.

Chase Briscoe spent 20 or so laps putting on a legendary duel with Larson, almost clearing the Californian at one point, but a dive into turn 1 on the second to last lap denied him a chance at doing something his team owner and hero Tony Stewart never could accomplish as a driver: win one of the three Crown Jewel events on the NASCAR calendar (Daytona 500, Coca-Cola 600 and Southern 500).

Was Briscoe too aggressive? Absolutely, if you ride on the knife’s edge for too long you’re going to end up stabbed in some way. But that was the only way he was going to get by Larson if he could. You only get but so many chances in a career to win one of these big races, and Briscoe is at least not going to look back at this race wondering what if.

Next weekend is the first-ever Cup race at World Wide Technology Speedway at Gateway, just the third new oval introduced on the schedule in the past 20 years. Gateway is a flat 1.25-mile egg-shaped oval like a flat Darlington. The race is scheduled for 300 miles or 240 laps.

Even if the race is boring, Gateway is going to be important because it should provide a decent preview for how drivers will perform on some of the flatter stops on the tour this summer, such as Pocono Raceway and New Hampshire Motor Speedway. It’s also a brand new market for Cup, on the outskirts of St. Louis, and it will be interesting to see if they can avoid the traffic problems that plagued the other inaugural races at Kentucky Speedway and New Hampshire.

How … close were we to a full Mexican sweep of Memorial Day?

Sergio Perez began “racing Christmas” winning a wild and wacky Formula 1 race at Monaco for Red Bull. It was the Mexican driver’s third win in the series and first on the legendary streets of the municipality.

Pato O’Ward took a stab on the outside of Marcus Ericsson and almost passed him on the final lap of the Indianapolis 500, but the Mexican driver could not get the car to stick entering turn one and had to lift and settle for second.

Suarez led 36 laps and won stage two of the Coca-Cola 600. But after running in the top five almost the entire night, Suarez was involved in a very violent wreck in which he spun in front of the field and led to Chris Buescher flipping multiple times after hitting a drain in the infield.

A massive wreck on the front-stretch sees the @RFK17Team driver barrel roll and come to a stop on his roof.

He appears to be okay. Red Flag has been deployed.#NASCAR #CocaCola600 pic.twitter.com/i68ftct6DY

Of the 90 drivers who started between F1, IndyCar and NASCAR on Sunday, there were only three drivers from Mexico. All three had viable chances to win, but only Perez was able to seal the deal.

Interesting. “A depleted field of cars”. That sums up Hamlin’s win. Nothing to brag about, but a win is a win. The hard-earned placement of certain drivers so close to a win, denied by a moron, and won by a moron…well..that is racing. Onto the next one!!!!!!!!!!!!!!

I’ve never seen a Destruction Derby last that long, usually they’re over in about 30 minutes.

I was impressed with what Justin Marks has been able to pull off in the team’s sophomore season.

It did seem like the teams were paying attention to the recommended tire pressures, & the only tire related issues were the number of cautions, vs the number of sets available. So, tires weren’t the story.

The luck factor made this almost seem like a Super Speedway race. A lot of bruised egos, torn up cars, & hard feelings.
But some of the drivers did say they wanted the new cars to be harder to drive. Looks like they got their wish.

Thought it was interesting how Hamlin didn’t mention the fallen hero he had on his car. Weird too they fedex didn’t have patriotic paint scheme.

I can’t believe I stayed up for this race.

I was disappointed in that as well. Even Kyle was able to set aside his typical snark (although you can tell he had to think about it real hard) and be somewhat professional while honoring rhe soldier whose name was on his car.

As someone mentioned, Larson had the race won until the moron Austin Dillon went into the turn wide open and wayyy faster than his driving abilities allowed and allowed the other moron to win the race.

Entitled Hamlin no doubt felt he deserved to win that farce.

Deserves has nothing to do with it in NASCAR. Keep crying.

Hey Stubby! You completely missed my point. And if you paid attention to what Entitled Hamlin has said in the past you would know that.

“Deserves has nothing to do with it in NASCAR

Tell that to Entitled Hamlin. He doesn’t know that!

Who cares what he said or how a driver gets a victory? He’s the winner and nothing can change it. If you’re so upset about him winning, don’t watch.

Stubby, you just don’t get it. Entitled Hamlin said he “deserved” to win an example of Brian’s product because he dominated the event and didn’t win. I was being sarcastic when I said he probably felt he deserved to win, even though he lucked into it. You never pick up on that. I guess you never heard him so do some research.

I mean yes, a driver would say that. Not like they’re gonna come out and say, “Yeah, we did not deserve that win at atll.” Some guys will acknowledge when they get a somewhat lucky win, some won’t. I’m a guy who believes whoever won deserves it the most since they did what they had to do(and whoever didn’t win clearly didn’t), but technically speaking, if you dominate a race (Hocevar Friday night, Earnhardt at Daytona in 1990) then yes, going by stats, you do deserve to win it.

It’s like when a driver wins and he says, “That track owed me one.” Every driver should want to lead only one lap.

Buescher didn’t hit a drain. His right front toe link/suspension housing broke and went under his car at speed propelling him much like doing a wheelie