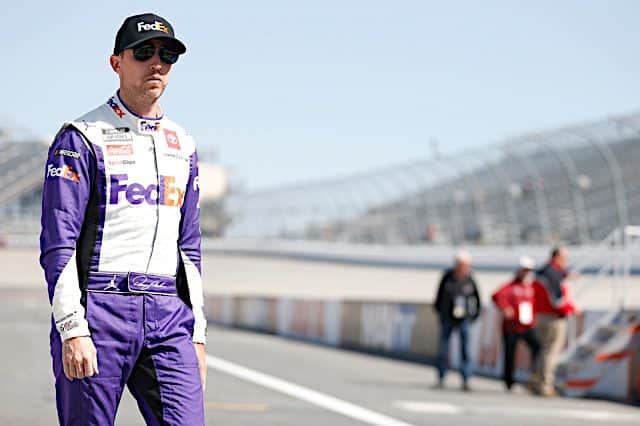 Denny Hamlin won the NASCAR Cup Series pole for the Coca-Cola 600 at Charlotte Motor Speedway, posting a fast lap of 183.68 mph in the second round of qualifying on Saturday (May 28).

Hamlin claimed his second Coca-Cola 600 pole, 34th of his career and first of the season.

”Just the reps, I run down there [turns 3 and 4] quite a bit in practice and then in my first run in the first round,” Hamlin told FOX Sports. “I had reps down there, so I kind of knew what I needed for my car. And I just thought, forward thinking, that this track was gonna get a little better and certainly we would want to cut the most distance we could off if the track continued to grip up.”

Several drivers had issues in both practice and qualifying, including Brad Keselowski, who slid around in his qualifying run but didn’t hit anything.

In practice, Kyle Larson and Corey LaJoie both hit the wall and suffered some damage. Larson’s team worked on the car and won’t go to a backup, but LaJoie’s team will go to a backup car.

Ryan Preece also spun, but no harm was done. Additionally, Kaz Grala’s hood flew up on his car.

My drivers starting 7th and 9th respectively, should be a great 600 miles of racing. Thank you to all the troops! This 600 miles of rememberance is 4 all y’all!

How much money and points for winning poles lol & what lap will nascar bring out the checkered flag for bubba.

It has to be after half distance….MAYBE!

Ford showing in qualifying is pitiful. Cindric starts sixth and McDowell starts tenth; that’s it for the top ten. Still, it’s 600 miles and anything can happen.