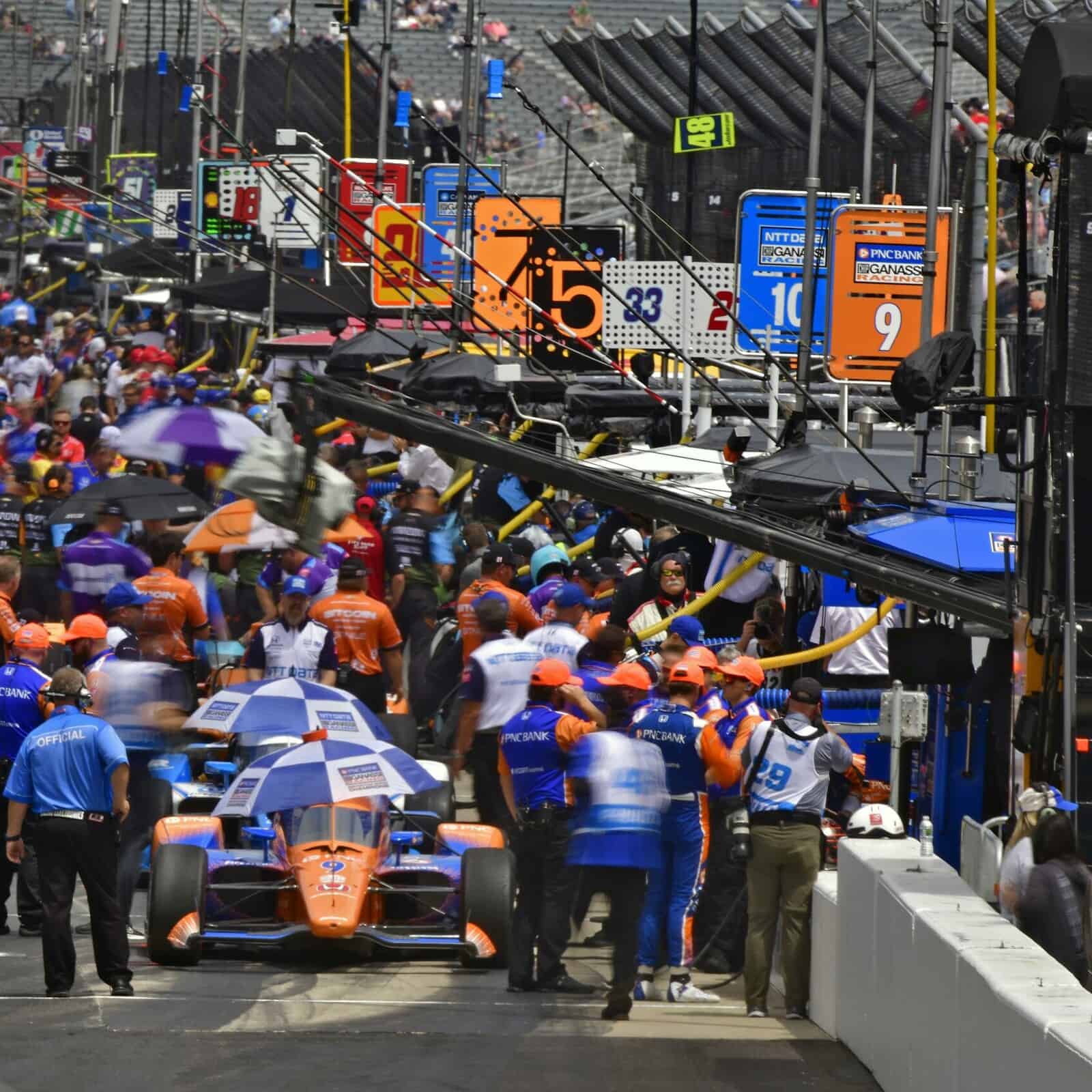 As the 106th Indianapolis 500 approaches, 33 of the best racers in the world prepare to take on the challenge of 200 laps around Indianapolis Motor Speedway. Let’s take a look at each of the 33 competitors by their starting position, but preview them with no more than 50 words.

Scott Dixon: Dixon’s car has been fast throughout practice, leading to his fifth pole at Indianapolis. Dixon only has one victory in the big race, but with all of the Chip Ganassi Racing cars near the front, the New Zealander has a lot of cars around him he can trust.

Rinus VeeKay: The next generation’s flying Dutchman, VeeKay is driving in his third 500 for Ed Carpenter Racing. The 2018 Indy Pro 2000 champion turned the fastest lap of the month at 234.702 mph during his Saturday (May 21) qualifying run, so he knows how to go fast around the Brickyard.

Ed Carpenter: The hometown hero has a new role in his eponymously named team as a part-time driver in a third car for the team. Carpenter has wowed the crowd with fast qualifying runs but hasn’t finished better than second in 2018. This will be Carpenter’s 19th Indianapolis 500.

Marcus Ericsson: The Swedish racer has a new outlook on ovals after a mentality shift with race engineer Brad Goldberg. Ericsson finished third at Texas Motor Speedway in March and is looking toward the ovals to improve his championship chances after finishing sixth in last year’s standings with average oval results.

Tony Kanaan: The 2013 Indianapolis 500 winner has partnered with Chip Ganassi Racing again, helping the team get four of the first six starting positions. The 2004 IndyCar champion has a great car, but numerology is against him. Kanaan has started sixth on two occasions, crashing both times (2008 and 2009).

Pato O’Ward: Winning at Barber Motorsports Park gave O’Ward momentum for a championship charge when he arrived in Indianapolis, but the 2020 Indianapolis 500 Rookie of the Year finished 19th at the GMR Grand Prix. O’Ward’s car was fast on the first day of qualifying, so watch out for him late.

Felix Rosenqvist: The Swedish racer qualified third on the first day of qualifying, but the middle of the third row isn’t bad for the former CGR driver. Rosenqvist finished sixth at the GMR Grand Prix, so let’s see if his road course performance will carry over to the oval.

Romain Grosjean: After running World Wide Technology Raceway at Gateway last season, Grosjean is running every IndyCar race this year and qualified ninth for his first Indianapolis 500. The Swiss-born Frenchman has experience at large events, but his first Indianapolis 500 is a completely different experience than anything else he has raced before.

Takuma Sato: The two-time Indianapolis 500 winner has had one of the faster cars during Indianapolis 500 practice. After his first qualifying run was disallowed for interference, Sato qualified again, brushing the wall on one lap but still keeping the car going. Sato can be fiercely competitive late in the race.

Will Power: The 2018 Indianapolis 500 was the ending of a magical month for the 2014 champion. Power starts 11th and enters the race as the points leader with finishes of third and fourth across all five races this season. With some adjustments, Power will be up front.

Jimmie Johnson: The seven-time NASCAR Cup Series champion has a lot of attention after his brush with the wall during practice and his save during qualifying. Johnson finished sixth at Texas Motor Speedway in March, so expectations are high for the Californian. A top-10 finish will be very good for Johnson.

David Malukas: Malukas has had a very fast car and is a contender for Rookie of the Year. The Chicago native has a good amount of Road to Indy experience and finished second in points last season in Indy Lights. Patience will be key for Malukas, who crashed on Carb Day.

Josef Newgarden: The 2017 and 2019 champion had his qualifying time reinstated by INDYCAR after it rained during his second attempt on the first day of qualifying. Newgarden’s best finish at Indianapolis is third in 2016 after starting second. He joined Team Penske the following year.

Santino Ferrucci: The 2019 Indianapolis 500 Rookie of the Year is in Dreyer & Reinbold Racing’s second entry and qualifying 15th has paid dividends to the part-time team. Ferrucci has three top-seven finishes at Indianapolis and will have an easier time moving up based on his starting position.

Simon Pagenaud: In his first Indy 500 with Meyer Shank Racing, Pagenaud will be starting 16th with the two-car effort. The 2019 Indianapolis 500 winner finished second at the GMR Grand Prix and eighth at Texas in March, so the Frenchman can certainly finish well on race day.

JR Hildebrand: The 2011 Indianapolis 500 Rookie of the Year finished second that year and leads AJ Foyt Racing’s three-car effort on race day. Hildebrand is running the ovals for the No. 11 entry while Tatiana Calderon runs the road and street courses, and he finished 14th at Texas.

Conor Daly: Daly is the lowest-qualified car at Ed Carpenter Racing, but the Noblesville, Ind., native led the most laps in last year’s 500 and finished fifth at the GMR Grand Prix. Daly has been the target of several pranks this month, but is looking forward to race day.

Callum Ilott: The 2020 Formula 2 champion drives for Juncos Hollinger Racing, a single-car team in its first full season of IndyCar racing this year. Ricardo Juncos’ team has impressed, advancing to the second round of qualifying at the two most recent road course races.

Alexander Rossi: The 2016 Indianapolis 500 winner is in a contract year with Andretti and has not had a good string of luck since his last win at Road America in 2019. Rossi has a lot of cars to pass, but he started 32nd in 2018, finishing fourth that year.

Graham Rahal: The son of 1986 Indianapolis 500 winner Bobby Rahal is in his 15th attempt to win the Greatest Spectacle in Racing. Bobby was 33 at his win, Graham is 33 now. The Rahal Letterman Lanigan team had some of the fastest cars last year, so watch out for their strategy.

Sage Karam: Karam was the highest gainer last year, starting 31st and finishing seventh. This year the 2013 Indy Lights champion starts 22nd after making a second qualifying run on the first qualifying day. Karam was patient last year; let’s see how that carries over to this year.

Marco Andretti: Andretti’s first qualifying run had issues with Sato’s on-track mishap and the engine’s plenum exploding, causing a loss of power. Andretti’s hoping for no more strange happenings and that the Andretti curse is finally broken 30 years after his father Michael lost the race after dominating.

Devlin DeFrancesco: After a less-than-ideal start of the season, DeFrancesco has made it through May without incident, which is pretty much perfect for a rookie. DeFrancesco has an oval win in the Road to Indy at Gateway, but IndyCar is a very different beast than Indy Pro 2000.

Colton Herta: The GMR Grand Prix winner had an engine failure on his warmup lap before his qualifying run. After an engine change, the Andretti crew got Herta on track to qualify 25th in a stout ninth row. Herta is in a backup car after a terrifying Carb Day accident.

Scott McLaughlin: McLaughlin won the opening race of the 2022 season at St. Petersburg and nearly won at Texas before teammate Newgarden got around him in the final corner. McLaughlin lost out on a gamble to increase his starting position, but the three-time Supercars champion is hoping his Texas form returns.

Helio Castroneves: Castroneves won his fourth Indianapolis 500 last year, but this year there are more cars in front of the Brazilian as the field goes to the green flag. Castroneves is in the same car he won with in 2021 that was damaged at the IMS open test in April.

Kyle Kirkwood: The Florida native has won championships on three levels of the Road to Indy and already has one top-10 finish this season at Long Beach. Kirkwood has two experienced teammates to help him, but given his form at Texas before crashing, Kirkwood should be fine.

Dalton Kellett: Kellett’s best finish in IndyCar competition is 12th at Gateway in 2021. The Canadian was pretty solid on ovals in the Road to Indy but hasn’t finished better than 23rd in the 500 in 2021.

Juan Pablo Montoya: Two 500 victories did not help Montoya qualify better, but the Colombian was very bullish at media day about having a good car for race day. Montoya ran the GMR Grand Prix and was in the top 10 before falling out with a late crash.

Christian Lundgaard: The first Danish driver to qualify for the Indianapolis 500 will start 31st after a ninth-place finish at the GMR Grand Prix earlier on May. Lundgaard qualified fourth in his IndyCar debut last August at the IMS road course and is looking forward to his second oval race.

Jack Harvey: Harvey nearly won the 2018 Indianapolis 500 but pitted for fuel with a handful of laps remaining. Harvey has switched teams this year to Rahal Letterman Lanigan Racing and his best finish this year is 13th on two occasions. Harvey won the 2015 Freedom 100 for Indy Lights at IMS.

Stefan Wilson: The younger brother of the late Justin Wilson led late in 2018 before pitting the same lap as Jack Harvey for fuel. Several teams banded together to help the DragonSpeed/Cusick Motorsports operation get its entry on track despite not turning a lap in qualifying because of a mechanical failure.