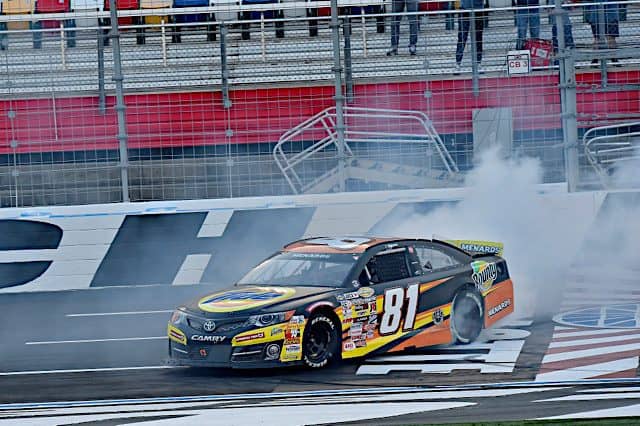 Jones won in his first ARCA start this year. It’s his sixth career ARCA victory and second at Charlotte.

“Gosh, Corey made me work for it pretty hard,” Jones told FOX Sports 1 post-race. “Track position was everything tonight like I figured it was going to be. We kind of got back to fourth, fifth in that area. It became pretty difficult to pass; those guys took off really well there, and I think Jacob [Canter, crew chief] did a phenomenal job adjusting it that stop. We had some stuff to work through to really make sure this Toyota Camry got back out front. So big thanks to those guys; we had a really fast Toyota Camry today.

“I was hoping that PJ1/resin spray was going to come in and it certainly did. I think that was definitely the fastest way around the racetrack. We actually got passed down there from running the bottom. Then they had to go up on the top to try and get me. I saw that they made it up there. So put that in the mental notebook. Made it work tonight and I’m dang sure it’s going to come in tomorrow. So I’m looking forward to it.”

Jones will start the NASCAR Xfinity Series race at Charlotte on Saturday in fifth.

“I’m super proud of these guys at Venturini Motorsports,” Heim told FS1. “They did a phenomenal job all weekend. Started out a little bit out of it and just adjusted our way into contention there and that’s really all you can ask for. If we would’ve got one more caution there, we would’ve put tires on it and adjusted it a little bit more, and gotten the balance right where we needed it. I might’ve had a shot at it there, but I’m just super proud of these guys.”

Rajah Caruth finished third. He fought a very loose No. 6 Chevrolet throughout the race, including making a jaw-dropping save.

“It was just loose,” Caruth told FS1. “With that one, it’s just lapped cars don’t know what they’re doing running in the middle of the racetrack. Just having to mess up my entry and running all over the place, getting crap on my tires when they were in the way. Very frustrating, but that’s what this series is for. Just people learning, so part of it.

“I mean, for sure, it was a good points day. I felt really bad off turn 4. I got cleared and I was hesitant coming up and it ruined both our days as a company. So I feel bad about that and that took all our side force away and I was so loose the rest of the day. Hate that we probably had one of the best cars and got nothing to show for it.”

Connor Mosack and Greg Van Alst rounded out the top five in fourth and fifth, respectively. Mosack bested his career-best ARCA finish of fifth, set in the previous ARCA race this season at Kansas Speedway.

Daniel Dye finished in sixth place after his No. 43 Chevrolet sustained damage in two separate incidents early in the race.

Amber Balcaen and Tony Cosentino earned their career-best ARCA finishes by finishing seventh and ninth, respectively. Nick Sanchez, who won back-to-back ARCA races entering Charlotte, was sandwiched between those two with an eighth-place finish. Sanchez felt an issue on his No. 2 Chevrolet in the closing laps. Although he did not pit, he sped entering pit road before his Rev Racing team instructed him to return onto the track.

The first half of the General Tire 150 was extremely messy with a number of cautions before the scheduled competition caution.

Within the first 10 laps, Parker Chase, Josh White, Dye and Drew Dollar all endured problems. Simultaneously, Chase had a fire inside his cockpit and White lost the engine in his No. 03.

Meanwhile, Dye misjudged moving his No. 43 up the track and collided with Dollar.

The wreck ended Dollar’s race, his last scheduled one this season in the series.

Under another caution a few laps later, Bryan Dauzat bizarrely drove his No. 57 into Dye’s car, sustaining more damage to it.

To cap off the caution-filled early portion of the race, Will Kimmel’s No. 69 blew a tire and slammed into the wall. The damage incinerated the car.

Kimmel was OK after the wreck, but disappointed with his 19th-place finish.

ARCA drivers next travel to Iowa Speedway for the first of three straight short track races. The Calypso Lemonade 150 will take place on Saturday, June 11 at 9 p.m. ET with TV coverage provided by MAVTV Motorsports Network and via streaming on FloRacing.