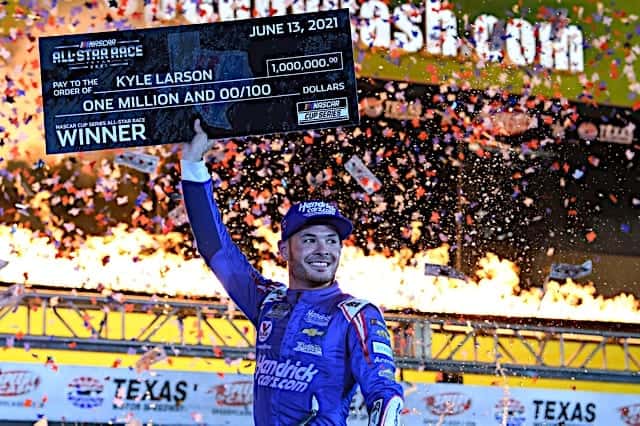 The 2022 NASCAR All-Star Race at Texas Motor Speedway ran to mixed reviews in 2022, with many openly questioning the relevance of the race and citing the distance teams have to travel now that it’s no longer in Charlotte, the expense, and the lack of down-time in the schedule as a reason to reconsider the race’s place on the schedule.

The All-Star event has evolved into much more of a spectacle than it was in 1985. It’s longer, it now features three transfers from the Open race and a fan-voter participant, and it pays a cool $1 million to win. Once a short feature not all that different than you might see at your local short track, it grew over the years to feature not only more laps, but all kinds of crazy ways to qualify and to set the field for different parts of the race.

The format has changed many times over the years, featuring inverted lineups, eliminations, pit stops under various rules, and even a convoluted formula of setting the last segment that required a computer program and/or a degree in Calculus to figure out.

We’ve also seen support features ranging from concerts and stunts (with or without explosions) to races for crew chiefs and the drivers’ wives (not at the same time) and burnout contests that nobody knew (or cared about) the rules for.

The races themselves have had mixed reviews. NASCAR has sometimes used them as a testing ground for new rules packages (unwise as no All-Star format is like a 400 to 500-mile race), and teams certainly have used them to try setups (not always strictly legal ones—see Jeff Gordon’s T-Rex experiment in 1997) and as a test session for upcoming races, particularly when it was held at Charlotte just before the Coca-Cola 600.

It’s been a rare event that a driver who raced in in the Open or won the fan vote has won the main event, though it has happened (Michael Waltrip in 1996, Ryan Newman in ’02 and fan-vote winner Kasey Kahne in ’08).

But does it really mean anything?

Twelve of the 37 All-Star winners prior to 2022 have gone on to win the title. That’s not an insignificant number; it’s just under a third of the race winners going on to the big prize.

All-Star winners who won the Cup title in the same year:

So, you’re probably still asking, what does that all mean?

Well, there are a couple of things to consider.

The All-Star winner-to-champion numbers were much higher in the race’s early years (six in the first 10 years) than from 1996 onward. That’s not to say it isn’t still done, and in fact it’s happened for the last two years in a row, only the second time that’s happened (it also happened back-to-back in 1989 and 1990).

That’s quite possibly due to changing formats of both the race and the championship itself. Both are drastically different than they were in 1985.

It is quite notable that both Earnhardt and Gordon won the title every time they won an All-Star event, something no other driver with multiple titles has done.

In the days before the playoffs, the All-Star Race may have been a better indicator because if a driver was on a hot-streak in early summer, he could parlay that into a title more easily than in the era of points resets. That’s particularly true under the current championship format, where one race can erase the hottest summer.

The All-Star event isn’t approached by all of the participants on the same agenda. While some, particularly those who have already nailed down a playoff spot, may go all-out for the paycheck, others use it as a test session for a points-paying race later in the season (the fall TMS race is a playoff race).

Today, teams with charters are obligated to attend and to run either the Open or the All-Star Race.

With growing support for its demise, the All-Star Race needs to have meaning in the context of the season. There’s hope for that with the recent revival of winners going on to take home a title. (Are you paying attention, Ryan Blaney?)

But the long-term numbers don’t bear that out in the playoff era. In the race’s distant past, there was a good enough chance that fans could watch the race with an eye to what was to come that it gave fans another reason to tune in and cheer for their favorite drivers.

Not that fans don’t root for their drivers today. And really, that’s enough of a reason to pay attention. It doesn’t mean much … but maybe it doesn’t need to.

The excitement definitely is NOT there anymore for this race. And no wonder. Texas???