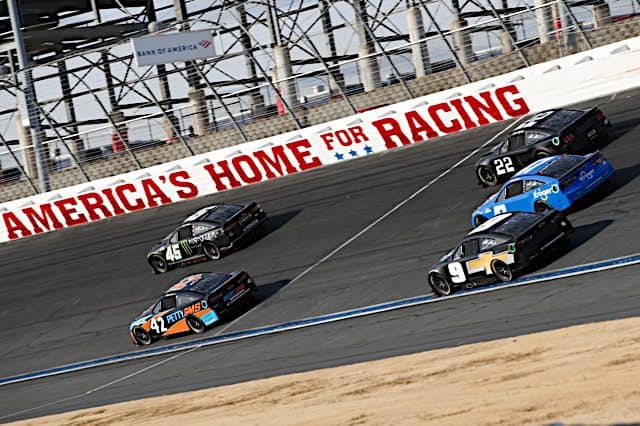 Do you still consider the Coca-Cola 600 a crown jewel event?

Anthony Damcott: Absolutely. The Coca-Cola 600 is on par with the Southern 500 and the Daytona 500 in several ways, including tradition, age and uniqueness. It should always be considered a crown jewel as long as it stays as NASCAR’s longest race, as well as the Memorial Day Sunday race, two things that really make the race special.

Luken Glover: Yes. I realize the race doesn’t carry the same test of equipment that we used to see, nor has the action for the lead been plentiful in past years. But it is still a race of attrition, grit and machinery. With the degradation of the tires on the Next Gen car and kinks in parts such as the engine, toe link and lug nut, I expect the race to make the equipment last to be much more on display than in past years. It won’t be like it was in the 20th century, but it will be more of a test than what we’ve been used to. Then you have to factor in hydration. Drivers spend more time than usual getting fluids and staying hydrated for this race because of its length. Add on to the fact that the 600 has been a cornerstone in NASCAR honoring our military for Memorial Day, and this race still carries more weight than most.

Mike Neff: Absolutely! There are four crown jewel events. Indianapolis Motor Speedway snuck in there as a fifth and replaced the Southern 500 for a short period when it went on hiatus, but Indy doesn’t get that status anymore as long as NASCAR is on the road course. Therefore, your jewels are the Daytona 500, World (Coca-Cola) 600, Bristol Motor Speedway night race and Southern 500.

Who is one driver you’d like to see do the Indy 500-Coca-Cola 600 double in the future?

Josh Roller: The obvious choices are Kyle Busch and Kyle Larson, so I’m going in a different direction and saying I’d like to see Ty Gibbs run the Memorial Day double one day. He’s immensely talented and needs a few years to mature as a racing driver, but he’ll make a good candidate in the future. I’d like to see Santino Ferrucci do the double, too. He’s still primarily an open-wheel driver, and his time in stock cars has shown he can wheel a stock car.

Damcott: I was originally going to say Larson or Busch, but Trackhouse Racing Team’s announcement of its Project91 program has just blown the door wide open for international drivers to not only potentially compete in the double, but also have a really good opportunity to win both. I could see someone like Romain Grosjean or Marcus Ericsson try it. They defected from Formula 1 and have found success in the NTT IndyCar Series, so why not try their hand in NASCAR too? Ferrucci is a name that comes to mind too, given he has experience in both cars, as do drivers like AJ Allmendinger and Juan Pablo Montoya.

Glover: Larson is be my top pick, but another driver that sticks out is Austin Cindric. His dad is the president of Team Penske and has served as the team strategist for its IndyCar teams. Cindric has already competed and found success in multiple racing disciplines, and his resume includes open-wheel racing. With a Daytona 500 under his belt, it would be neat to see Cindric pull the double with Penske.

Neff: There are a lot that I would enjoy, but the obvious answer at this point is Larson. He fits the mold as a well-rounded driver who will climb in anything and race with a chance to win. The other one, whom people might not think of these days, is Jimmie Johnson doing it as a primarily IndyCar driver. That would be an interesting storyline.

Neff: It would be nice to see some NASCAR Camping World Truck Series guys get a shot. Let’s put Matt Crafton and Johnny Sauter in there. Perhaps give Grant Enfinger a run. While we are at it, give Bubba Pollard a try.

Roller: Tyler Reddick is the best answer for Big Machine, but when he isn’t available, it needs to select a Cup regular. It will be a Chevrolet-aligned driver, so the best options are Chase Elliott and Larson, but perhaps the most available option will be Ross Chastain. I can’t see a Hendrick Motorsports driver racing for anyone other than JR Motorsports, and Justin Marks is more likely to allow Chastain to drive for Big Machine. If Scott Borchetta allows Marks to put a Trackhouse partner onboard, that only sweetens the deal.

Damcott: It would be cool if Big Machine rotated in some drivers who aren’t running a full-time Xfinity schedule and have little to no manufacturer ties, such as Jeffrey Earnhardt, Brennan Poole or maybe even someone like Shane Lee. Reddick’s win at Texas has proven that the team can run up front, if not contend for wins, so why not put some lesser-known names in the driver’s seat to prove their raw talent? Of course, sponsorship and alliances have something to do with how the car runs, but that team has definitely run better since essentially benching Jade Buford, so why not give other guys a shot?

Glover: Big Machine will have used Kaz Grala, Reddick and Austin Dillon following this weekend’s races. That opens the door for more Richard Childress Racing-affiliated drivers to step in. Petty GMS Motorsports is the first to come to mind, which would provide an opportunity for Erik Jones or Ty Dillon. Both drivers have had some speed at times this year, and extra seat time can be valuable. If it wants to go outside the immediate RCR campus, maybe Trackhouse drivers such as Chastain or Daniel Suarez could take a turn in it.

Despite competing part time, Ryan Preece is 17th in Truck points. If he earned a full-time ride, would he be a championship contender?

Glover: Ryan Preece could definitely be a title contender. His worst finish in four starts this season is seventh, with two top fives to his credit. Driving for a smaller team like JTG Daugherty Racing overshadowed how talented Preece is, and now he is getting a shot to shine in the Truck Series. David Gilliland Racing has struggled to find footing over the past couple of seasons, but it still has plenty of speed to get the job done.

Neff: In the Truck Series? Most definitely! In a full-time Xfinity ride, he could as well, provided it has the resources behind it. Preece has already proven he is a very talented driver by winning a modified championship along with Truck and Xfinity races.

Roller: Depending on how silly season shakes out for Stewart-Haas Racing — in both Cup and Xfinity — Preece and SHR should consider finding Preece a ride in Trucks with DGR. Preece has given those trucks some of the best runs and would be an excellent mentor for DGR drivers. So, yes, he would be an instant playoff contender if Preece landed a full-time ride. His ability behind the wheel wasn’t able to be fully seen at JTG in the previous generation of Cup cars. But it seems to click exceptionally well when he drives a truck.

Damcott: With the right funding, he could put together a full-time season with DGR and contend for the title. What Preece needs is a fresh start, to re-establish to people that he is a talented racecar driver and can win if given the right opportunity in a higher series like Cup (and given that he was signed as a reserve driver to SHR, he could have a very nice career turnaround in the near future).

Those of you who said no to the crown jewel, back in momma’s basement. Leave this sport to adults.

The World 600 is a Crown Jewel that NA$CAR has lowered the value of until it isn’t worth the box it is in.

I agree with you.