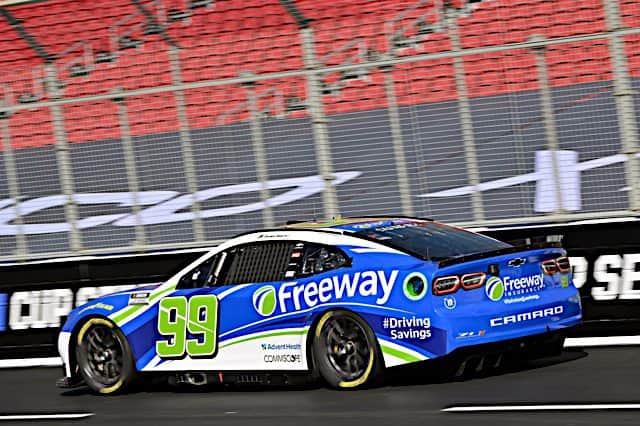 TrackHouse Racing’s Daniel Suarez won the All-Star Open Sunday (May 22) at Texas Motor Speedway. He, along with stage winners Ricky Stenhouse Jr. and Chris Buescher, will move on to this evening’s NASCAR All-Star Race.

After being promoted to pole position when Tyler Reddick was forced to start from the rear for an unapproved adjustment, Suarez spent the entire race in the top five. After finishing the first two stages in third and second, respectively, he started the final stage from the lead.

A hungry Reddick tried to grab the top spot, but Suarez held him off. Just a lap later, Reddick lost control of his No. 8 Chevrolet in front of the field, collecting Harrison Burton.

Tyler Reddick goes around and collects Harrison Burton in the All-Star Open at Texas! https://t.co/PcHjjWk02g pic.twitter.com/lzPeOfleyV

With Reddick out of the running, Suarez didn’t look back. A strong restart with eight laps remaining got his No. 99 into clean air, and that was it. Tonight will be Suarez’s third career appearance in the NASCAR All-Star Race.

After Reddick was sent to the back before the start, third-place qualifier Ricky Stenhouse Jr. suddenly found himself starting the Open from the front row. He took full advantage of the opportunity, leading all 20 laps in his No. 47 JTG Daugherty Racing Camaro to take the stage one victory.

This will be Stenhouse’s fourth All-Star appearance, and his first qualification via the Open since 2013.

Corey LaJoie was the only driver to stay out to start the second stage, and he maintained the lead as drivers behind him on fresh tires battled for position. Unfortunately for LaJoie, a lap 10 restart gave Buescher the opportunity to make a daring three-wide pass on LaJoie and Suarez. Buescher led the final 10 laps of the stage and claimed the green-and-white checkered flag.

This will be Buescher’s second All-Star appearance, and the first time the RFK Racing driver has qualified via the Open.

Petty GMS Motorsports’ Erik Jones will also have a shot at the $1 million check after claiming the final spot in the All-Star Race starting lineup as the Fan Vote winner.

Suarez, Stenhouse, Buescher and Jones will join the 2021 and 2022 NASCAR Cup Series race winners to fight it out for a million-dollar payday in the NASCAR All-Star Race from Texas Motor Speedway, 8:00 p.m. EST on FS1.

Who is gonna win the All-Star Race? I pick Kyle Larson to win 2 in a row. Champions usually win the A-SR.