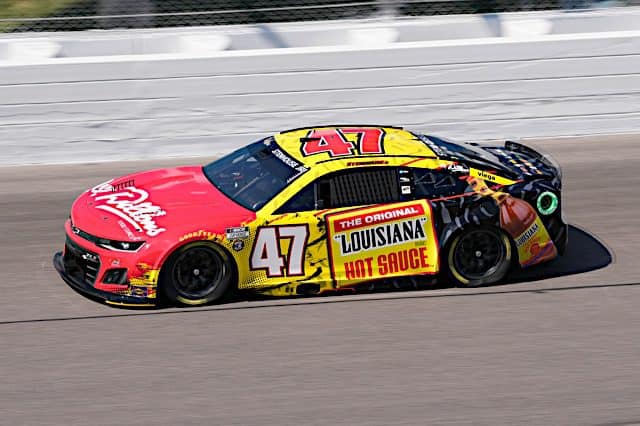 Not only was it Stenhouse’s first win at NASCAR’s premier level, but it was the third straight race he had earned a top 10 during that season. That was also the last time he had such a streak … until now.

Stenhouse overcame starting from the rear at the AdventHealth 400 at Kansas Speedway (May 15) to earn an eighth-place finish, making it three straight results inside the top 10.

It was a complete 180º from how Stenhouse’s weekend commenced in the Midwest. During Saturday’s practice, Stenhouse cut a tire and slapped the wall with the right rear of his car. The damage was not enough to bring out the backup, however, as the team was able to repair the rear bumper.

Stenhouse’s issues were just a sliver of a common theme of tire failures during both practice and the race itself.

However, as Stenhouse’s competitors fell victim to the degradation of the tires, his No. 47 Louisiana Hot Sauce/Dillons Grocery Chevrolet stayed true to the task to bring home a strong result.

Starting at the rear to begin the race, the 34-year-old Stenhouse entered the top 15 on lap 43. With 13 laps remaining in stage one, crew chief Brian Pattie kept Stenhouse out to attain the lead, but the No. 47 slipped to 18th by stage end on different strategy.

Stenhouse got the No. 47 back into the top 15 in stage two, where he sat for most of the stage before ending it in 11th.

As the final stage wore on and the Kansas sun shined on the track, Stenhouse’s car began to shine itself. He drove into the top 10 and ran as high as seventh before losing one more spot to finish the race in eighth.

At times, the Mississippi native has drawn criticism for his aggression, and bad luck has hit him many times – especially in 2022. However, while several cars experienced issues at Kansas, Stenhouse never batted an eye and drove to his third straight top 10.

Sunday marks only the second time in Stenhouse’s career that he has gone on such a streak, and this is his first career top 10 at Kansas. But instead of looking at the scarcity of these stats, it rather points to the fact that suddenly, there appears to be a fire lit under him. No, the results may not be as good as the sport’s top-tier drivers, but make no mistake: a fast and motivated Stenhouse can be a scary Stenhouse.

In his third season with JTG Daugherty Racing, Stenhouse has now matched the most top 10s he’s earned in a season with the team, now owning four on the season. With 23 races remaining on the year, he’s suddenly likely to exceed that mark… and then some.

After the series visits Texas Motor Speedway for the annual All-Star race, the attrition-filled and iconic Coca-Cola 600 comes to town. If this momentum keeps up, do not sleep on this JTG Daugherty team there.

Noah Gragson did not have the pressure or obligation to focus on two races this weekend. With his full-time ride in the NASCAR Xfinity Series on break, Gragson was able to concentrate on the race for Kaulig Racing in their No. 16 Chevrolet. The result was Gragson’s best career finish after five starts in NASCAR’s top division. Gragson drove his No. 16 Chevy Accessories Chevrolet into the top 20 in stage two, getting as high as seventh. He remained a consistent presence in the top 20 for the rest of the afternoon and was rewarded for it (18th). Gragson’s next scheduled start for Kaulig is the illustrious Coca-Cola 600 at Charlotte Motor Speedway.

Following the race at Martinsville Speedway, Corey LaJoie told me how his run at Las Vegas Motor Speedway was his best run of the year at the time, giving them hope for other 1.5-mile tracks. That speed on intermediates was on display again, as LaJoie brought home a solid 19th-place effort. Since a lackluster result at Martinsville, LaJoie has recorded four top 20s in the past five races.

It may not be flashy, it may not make the headlines, but it will get the job done. That describes several runs by Ty Dillon in his first season with Petty GMS Motorsports this season. Dillon ran around 20th for much of the race, leaving Kansas with a 20th-place finish. It was his eighth top 20 of the season.

If you are looking for a “how-to” video, look no further on how to remove a locked lug nut than Erik Jones’ No. 43 team. Jones was having a strong run when his right rear tire would not come off during the stage one break. The Byron, Mich. native was forced to run on the old right rear for a stint before the team tackled it again.

What supplies might you need to perform such a task? An air gun, sledgehammer, hacksaw and wrench should be on the agenda. The only tool the pit crew was missing was the power saw Furniture Row Racing used a few years back. The No. 43 FocusFactor crew was forced to cut the wheel to get to the lug, which was tricky as they had to make sure they didn’t strip the stud. Despite being held for multiple laps due to the issue, Jones would be able to finish the race in 32nd, six laps down.

That was a wild one. @JamieLittleTV talks with James Houk of @PettyGMS about the issue at Kansas. pic.twitter.com/TU5So5c5pO

Ricky Stenhouse Jr. (eighth): “All-in-all, a really good day and another top 10 for our No. 47 Dillons / Louisiana Hot Sauce Camaro. After starting in the back from our issues in practice yesterday, I’m really happy with the result. We were solid on pit road. We made some good adjustments to get our car better. I felt like I was really strong at points, but we were around an eighth-place car. The top five were really, really fast, and I didn’t have anything for them.

“I’m really happy with where we ran. We didn’t make any mistakes and brought home another top 10. That was our goal coming in, to try and keep that momentum going.”

Noah Gragson (18th): “We had a good day with this No. 16 Chevy Accessories Camaro ZL1 and solid pit stops. It was fun to race in the top 10 and really use the day as a learning experience for not only myself, but for the team. Hopefully, it will help us for the next few races we have together coming up.”

Erik Jones (32nd): “Our FOCUSfactor Chevy was decent today. We started out pretty good, but a little on the free side. The guys made good changes and made a pit call to get us in the top 10 and stage points at the end of stage one. Unfortunately, we had the issue with our tire and getting the right rear off. That kind of ended our day after going multiple laps down. We’ll refocus and head to Texas for the All-Star race.”

Justin Haley (35th): “It was a trying weekend for us here on this No. 31 LeafFilter Gutter Protection team. We had some technical issues through inspection but the guys worked hard all weekend to get them fixed. We had a decent qualifying run with some good speed in the race but just ran into multiple issues with an eventual electrical problem that ended our day. I appreciate everyone at Kaulig Racing for the fight.”

Kansas may be known for its barbecue sauce, but who’s up for some hot sauce? I’m a fan of hot sauce, and Stenhouse’s No. 47 Louisiana Hot Sauce/Dillons Grocery Chevrolet brought the heat to the track. He added some flavor to the mix by earning his fourth top 10 on the 2022 campaign.

Hey underdogs, get your game on! It’s time to go All-Star racing as several underdogs will look to snag a spot inside the main event through the All-Star Open. The All-Star Open at Texas will take place on Sunday, May 22 at 6 p.m. ET with TV coverage provided by FOX Sports 1.